Last night was one of those times where things unexpectedly converge in the most lovely of ways, instead of their usual trick of trying to take you down.

I felt all kinds of peaceful. I’ve been listening to The Unthanks, they did the music for the recent Worzel Gummidge adaptation, to their Scarecrow Knows and the Crop Circle Waltz mainly. The boys sang along with me as I sang the scarecrow song at bedtime while I brushed Charley’s hair and Ben wrote in his diary, it really seems to have caught them. And then Erika and I danced in the kitchen with the Crop Circle Waltz on repeat. It dawned on me that I was stim dancing…. and to me, in the moment, it was almost hypnotic. Probably would have been if Erika hadn’t have been twirling around next to me. She wanted me to whisper-chant “the trees are the keys that spin upon the breeze” as she snuggled up to fall asleep on me, and I remembered the bedtime poems I’d collected from when I used to read poetry to the boys when they were younger as they fell asleep.

She loved the poems.

She fell asleep listening to me whisper poems by Sarojini Naidu, Eugene Field, and J W Foley. I felt happy. Poetry and singing and dancing… and magic.

I realised the other week that I need to start allowing myself to really notice the pretty things around me again, to take the time to enjoy them no matter how small they might seem. To stop being so caught up in a bigger picture that I have very little influence over and that often overwhelms me, and to stop and smell the roses. As it were.

I picked up some crochet for the first time in a long time, and allowed myself to enjoy time spent on it rather than feeling guilty for “running away”. Netflix and crochet. Good stuff!

We tidied up a few bits over the weekend (a sort of benefit I suppose of storms stopping us from doing outside jobs) including sorting out a single collection area for junk modelling resources! Turns out I had a quite a lot of stuff stashed away in various locations. Charley is SUPER happy though. Definitely a new Happy Place for him, this spot.

And Erika decided late one night that even though my birthday is at the other end of the year she was going to throw me a birthday party. Making her kitchen accessible like this has been so high on my list of Wants for a long time, because I knew how happy it would make her. And it makes me happy, seeing my children happy.

I noticed these crocuses on my way back in from picking up the bins that Storm Dennis had redistributed for me. 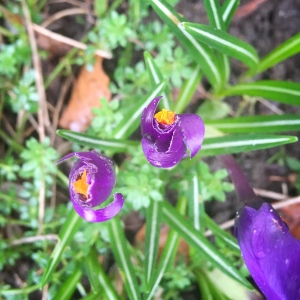 And Steve brought flowers home for me – these lilies were in them and now they have opened they rank up there with the amaryllis in how they are such absolutely glorious show-offs. I love them!

A moonbeam floateth from the skies,
Whispering, “Heigho, my dearie!
I would spin a web before your eyes,-
A beautiful web of silver light,
Wherein is many a wondrous sight
Of a radiant garden leagues away,
Where the softly tinkling lilies sway,
And the snow-white lambkins are at play,–
Heigho, my dearie!”

A brownie stealeth from the vine
Singing, “Heigho, my dearie!
And will you hear this song of mine,–
A song of the land of murk and mist
Where bideth the bud the dew hath kist?
Then let the moonbeam’s web of light
Be spun before thee silvery white,
And I shall sing the livelong night,–
Heigho, my dearie!”

The night wind speedeth from the sea,
Murmuring, “Heigho, my dearie!
I bring a mariner’s prayer for thee;
So let the moonbeam veil thine eyes,
And the brownie sing thee lullabies;
But I shall rock thee to and fro,
Kissing the brow he loveth so,
And the prayer shall guard thy bed, I trow,–
Heigho, my dearie!”

From groves of spice,
O’er fields of rice,
Athwart the lotus stream,
I bring for you
Aglint with dew
A little lovely dream.

Sweet, shut your eyes,
The wild fire-flies
Dance through the fairy neem;
From the poppy-bole
For you I stole
A little lovely dream.

Dear eyes, good night,
In golden light
The stars around you gleam;
On you I press
With soft caress
A little lovely dream.

Song Of A Dream