Today has been one of those days that is just on its head. Double burnout. I’m sort of on the way out of burnout, but Steve woke up broken. And I ended up running away instead of dealing with it, abandoning him to the kids, and absconded into my den in the attic.

Before running away though, and before the rugby started, I persuaded him outside to wander the grounds with me. He realised it’s been weeks since he’s been out in our garden. 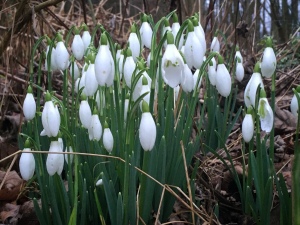 We needed to breathe, and look, and observe, and figure out where to start this year’s management. Our first tour had three of our five cats accompany us. I guess Eep and Grylls were still snoring somewhere! We know not to walk back down the lane now, as amusing as it is to walk our cats down there, as they have an extremely bad habit of careering out into the main road before cantering back up our driveway and our hearts couldn’t take the stress of that any more. So we come back down the field instead. Where the cats can freak about the buzzards that fly and screech overhead instead.

Anyway we’ve planned which areas to start on. Management of the areas we worked on last year shouldn’t take too long, it’s essential if we don’t want them to get out of hand immediately. And a fallen tree and another storm damaged one next to it cemented the choice on another section.

I wasn’t ready to stay indoors though once we got back, and headed out again “to take pictures before it got dark” and ended up cleared a tiny clearing of brambles between the sheds and the barn. 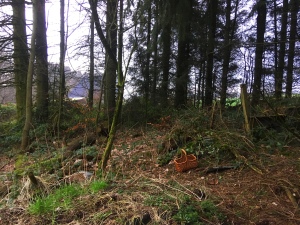 It felt absolutely pointless. It is such a depressing patch of ground, so overgrown, it obviously used to be a small fenced area for livestock but the metal fences are broken and there are various rolls of wire fencing snarled up in brambles and piles of glass from when the old coldframe succumbed to a storm before we bought the place.

But the cats came out to keep me company. They are so very much our pride, our pack, whatever you want to call it. I appreciate their company. They don’t mind me being a grumpy witch. 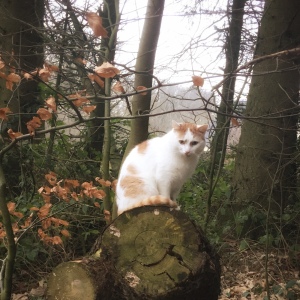 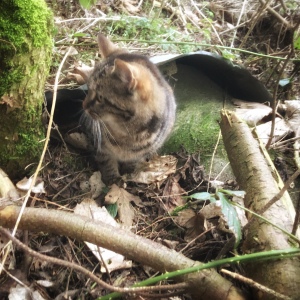 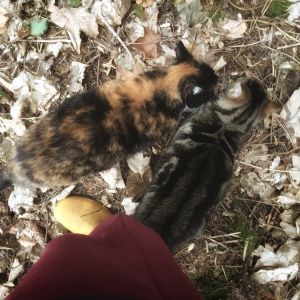 After I’d collected a full basket of large pinecones I headed out for another walk around. There was a fallen tree that was determined to keep living that I’d noticed earlier, 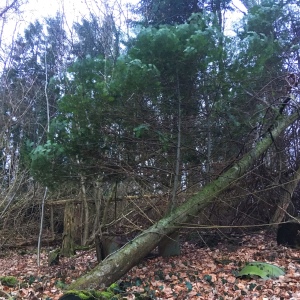 those are branches off the tree, becoming like their own trees! That tree will need to be looked after. It has willpower.

And there was another fallen tree that the ivy had taken over. But instead of just wrapping itself around the trunk, the ivy had sent branches straight up. Like a fence. 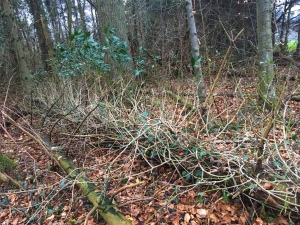 That’s another one that will be staying just where it is. We’ll work around it.

Look at that. I wrote another update.