It rained overnight so it’s been a non-nettle weeding day today. Plenty of cleavers to pull out, plenty of herb robert, and plenty of other weeds and stray grasses. In amongst all the chaos in this little patch is my walking onions, some purple sprouts, purple poppies which I did not plant but I love poppies so they have been allowed to stay, and the tallest as-yet-unidentified allium type things I’ve ever seen. They’re taller than me. Their flower heads are going to be enormous!

Then I headed over to the greenhouse frame – and once you start pulling at the cleavers it’s hard to stop! Three overflowing tubs later and I decided to call it a day, my gloves need to dry out before I come back for all the nettles.

Yesterday I finished clearing the first section of front garden. There’s at least double that size still needs clearing but it’s a great start. Our plans are to create a pretty cottage garden patch outside the living room windows so it’s a pretty little patch that greets visitors, and fence off a more private garden around what is currently our bedroom because once the attic renovations are (started, and) finished and we can all move into our new upstairs bedrooms, we’ll convert our current bedroom into a proper little guest bedroom with its own door and garden.

Going to have to spend actual money now though, to progress with this patch… need some big stones for the garden path, and then the fencing. The boys want me to make sure their hideout is reinstated next to the drive so that’s a bit of a creative project for me!!

The vegetable garden has had its path re-cleared at last, and I spent some time weeding the beetroot patch and digging out another section of couch grass – the only bit left to attack is the final raised bed which has strawberries and more couch grass in. Tempted to rip the whole lot out, get as many couch grass roots out as I can, then let some new strawberry runners root there. The strawberry patch needs sorting out, it’s huge and you can’t get in to the middle any more. We’re considering putting the raised bed frames back once the strawberry plants are done for the year, and clearing paths around again.

And the big flowerbed that was so so full of docks and nettles and grasses and ground elder last year, has finally been finished! It was lovely to discover as I worked at clearing it that it naturally split into definite sections, so Erika’s Garden is separated from the courgettes by an azalea and lavender; the courgettes are separated from the butternut by a beautiful orange-yellow rose, a huge sage bush, michaelmas daisies, and chives; and the butternut squash are separated from the rhubarb by some lily type things, mint, and a hydrangea. Along the edge where it borders the garden we’ve built fence style supports for all the tomato plants that whether they fruit or not should hopefully at least grow into an interesting hedge! At the far end of the bed is a concrete trough which I’m going to transplant the various mints we have into. It needed some serious clearing out, I suspect when the old cold frame came down a lot of the debris fell into the flowerbed and particularly this trough, so there was a LOT of broken glass and metal ties in there along with a bucket full of bulbs which now need rehoming. It’s all clear now though, ready for the mint! 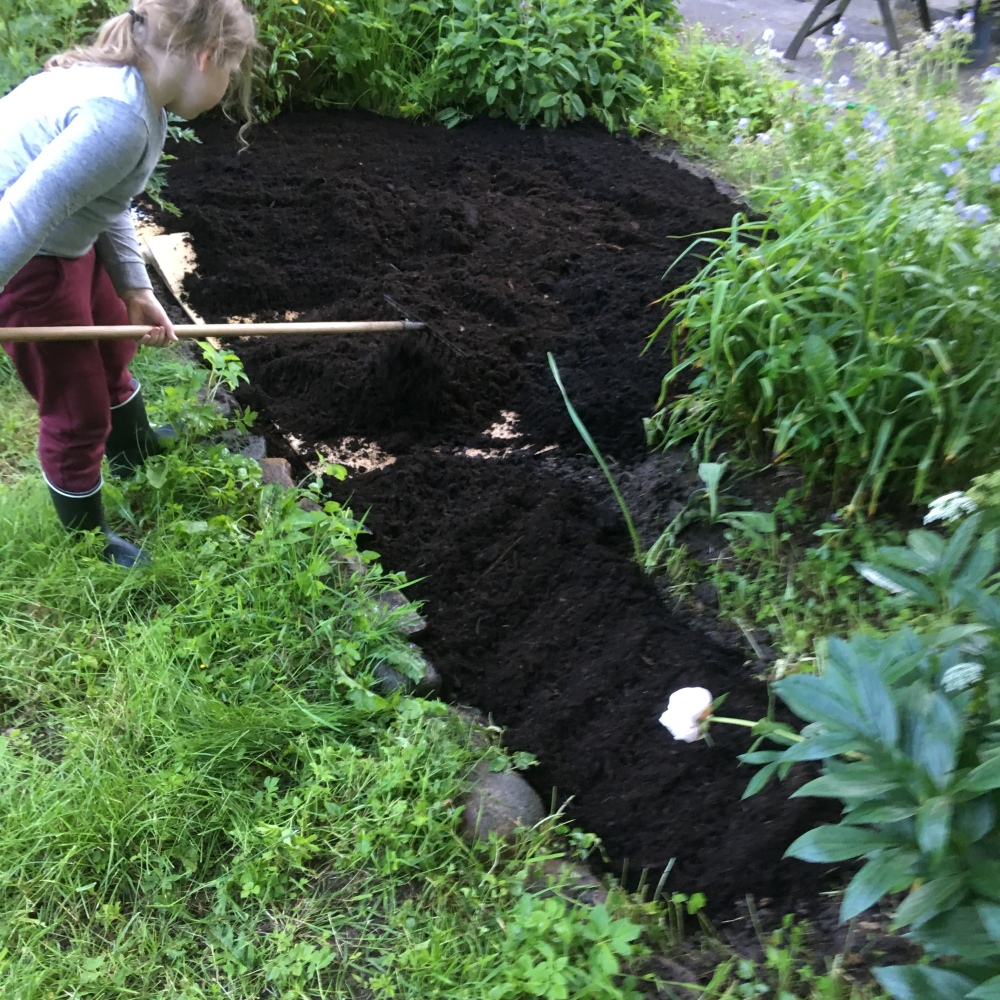 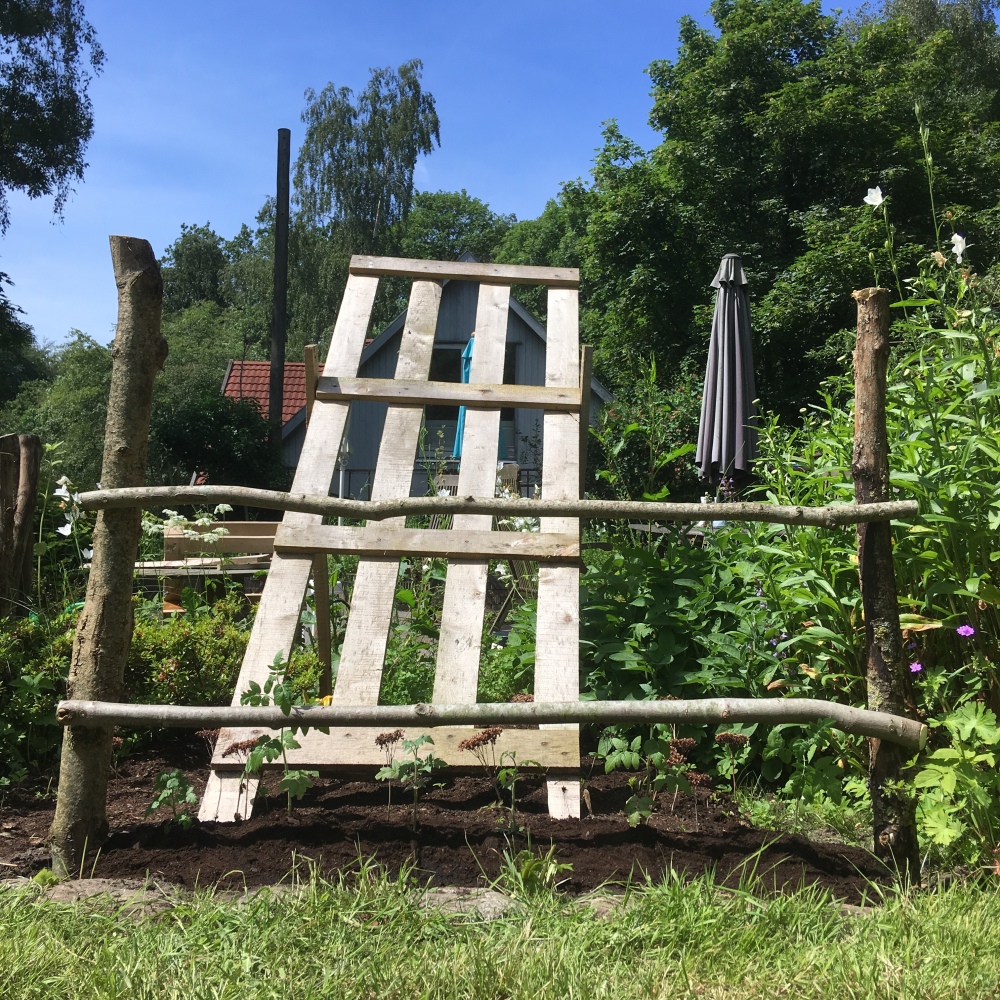 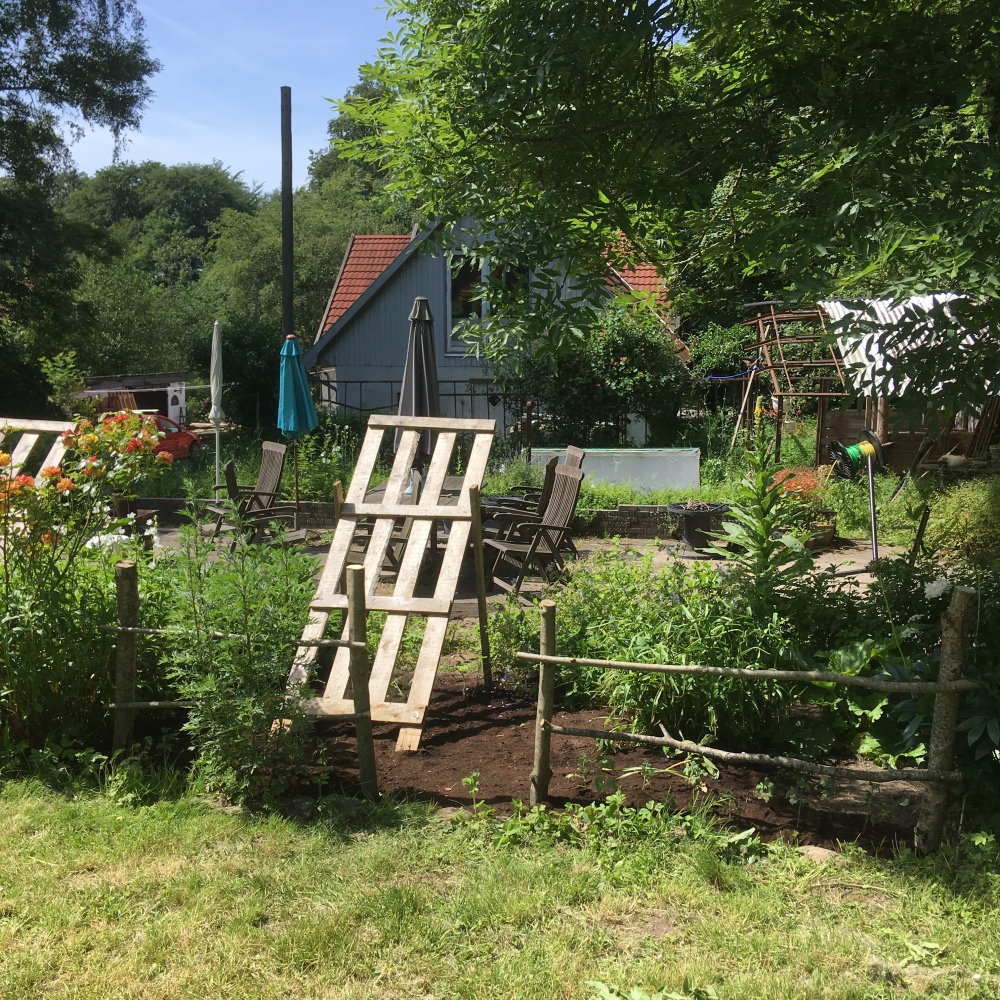 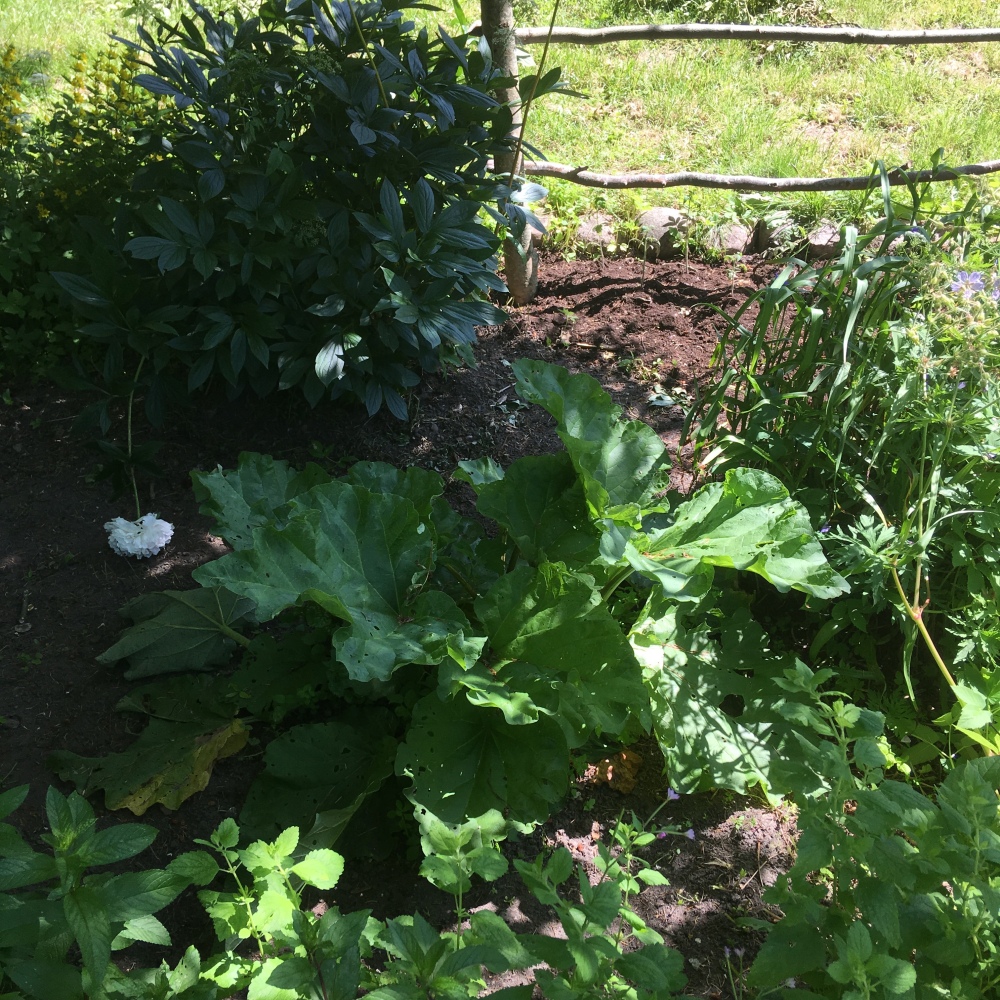 In the kitchen garden I’m slowly created more planting beds. The rhododendrons have been pruned so they have open areas underneath, and already I’ve transplanted the wild garlic that was next to the pétanque to this new patch, and some tenacious chives that were clinging on to life in an old window basket. The walking onions and spring onions will have a home here, and if I can convince the allium canadense to transplant happily they will find a home here too. 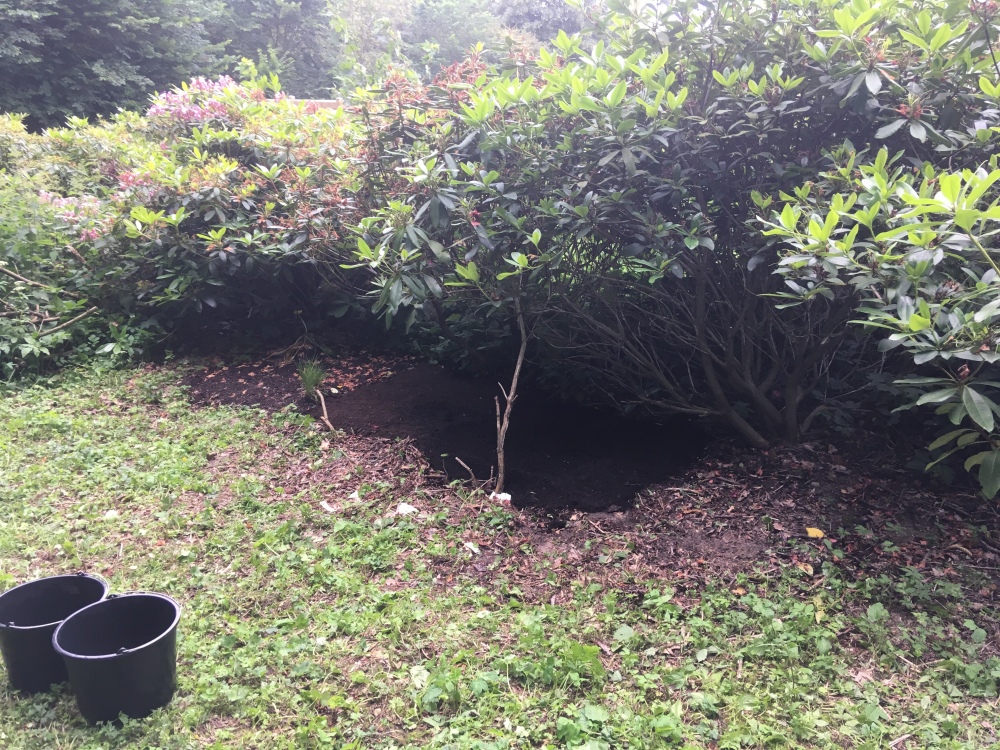 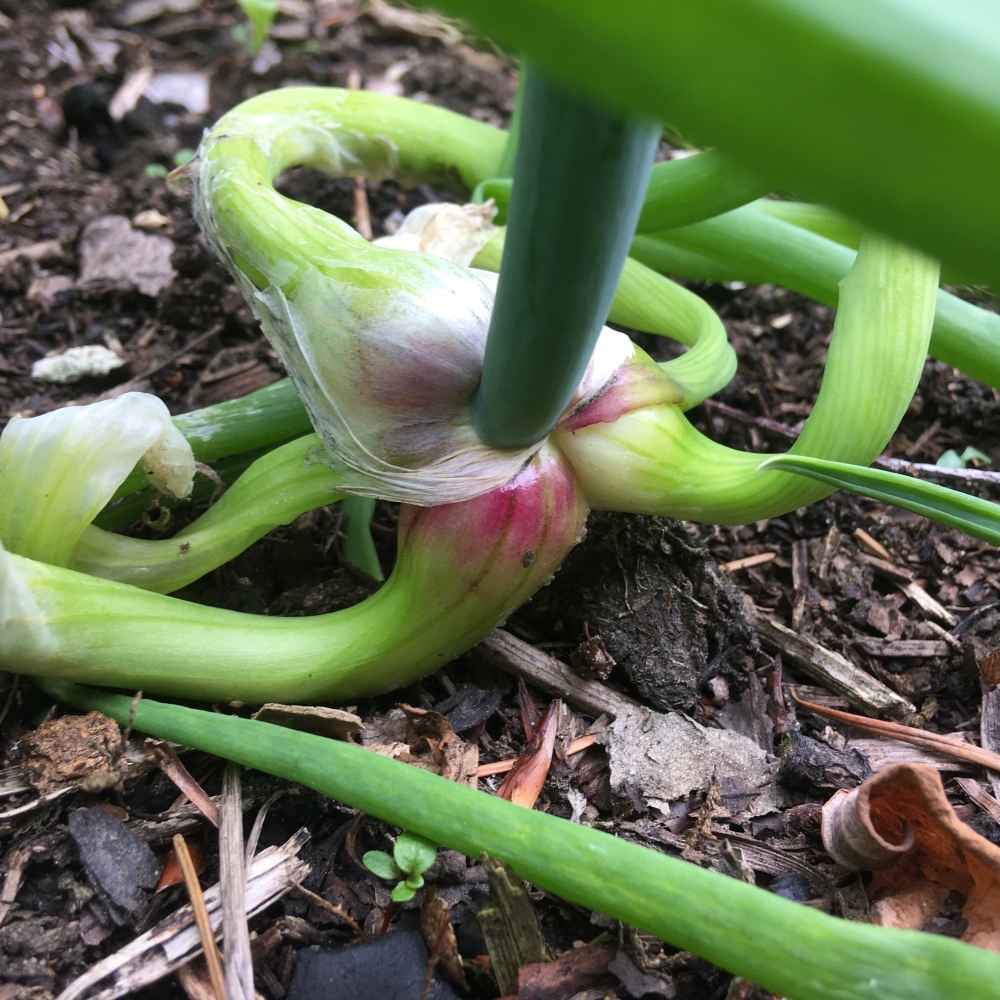 And we spent a happy afternoon collecting up pots where the inhabitants had died, emptying them and reusing them. The wild alpine strawberries have sent out runners again and we’re giving them a better chance to spread and grow so their babies can be planted over in Erika’s garden! 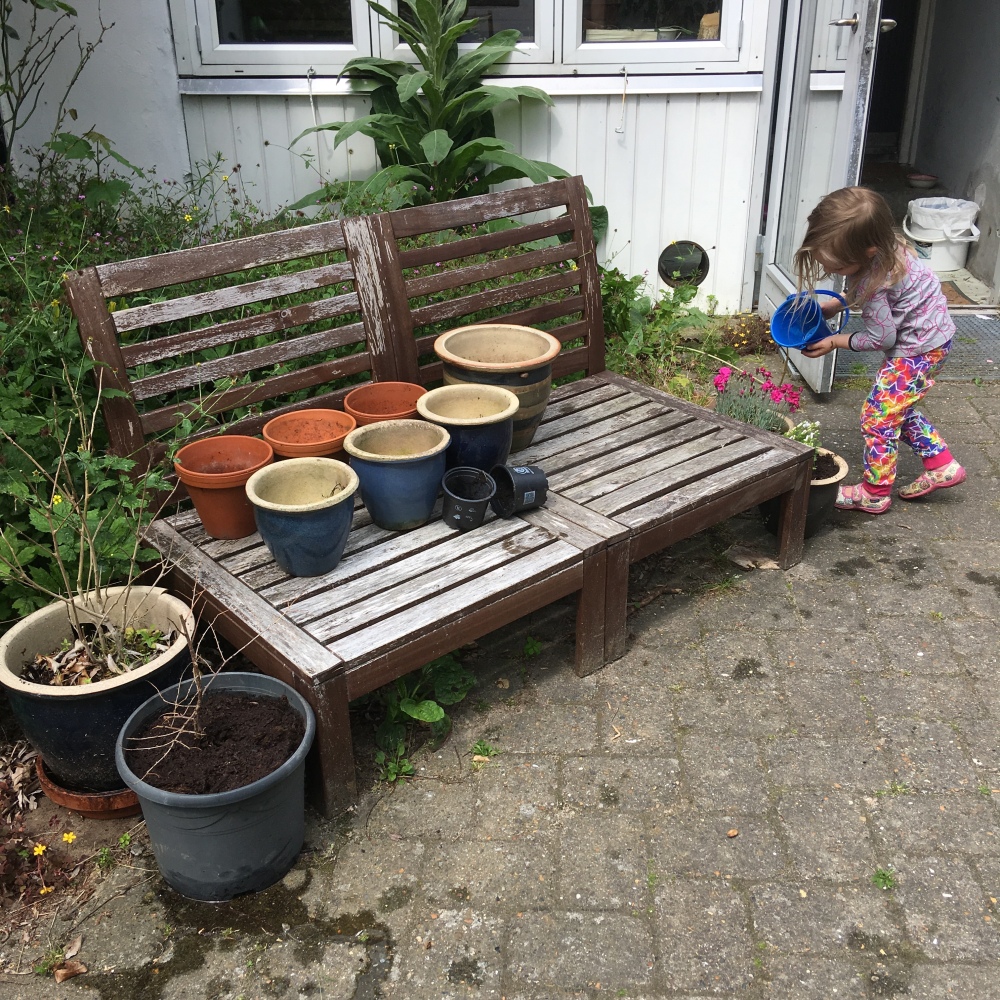 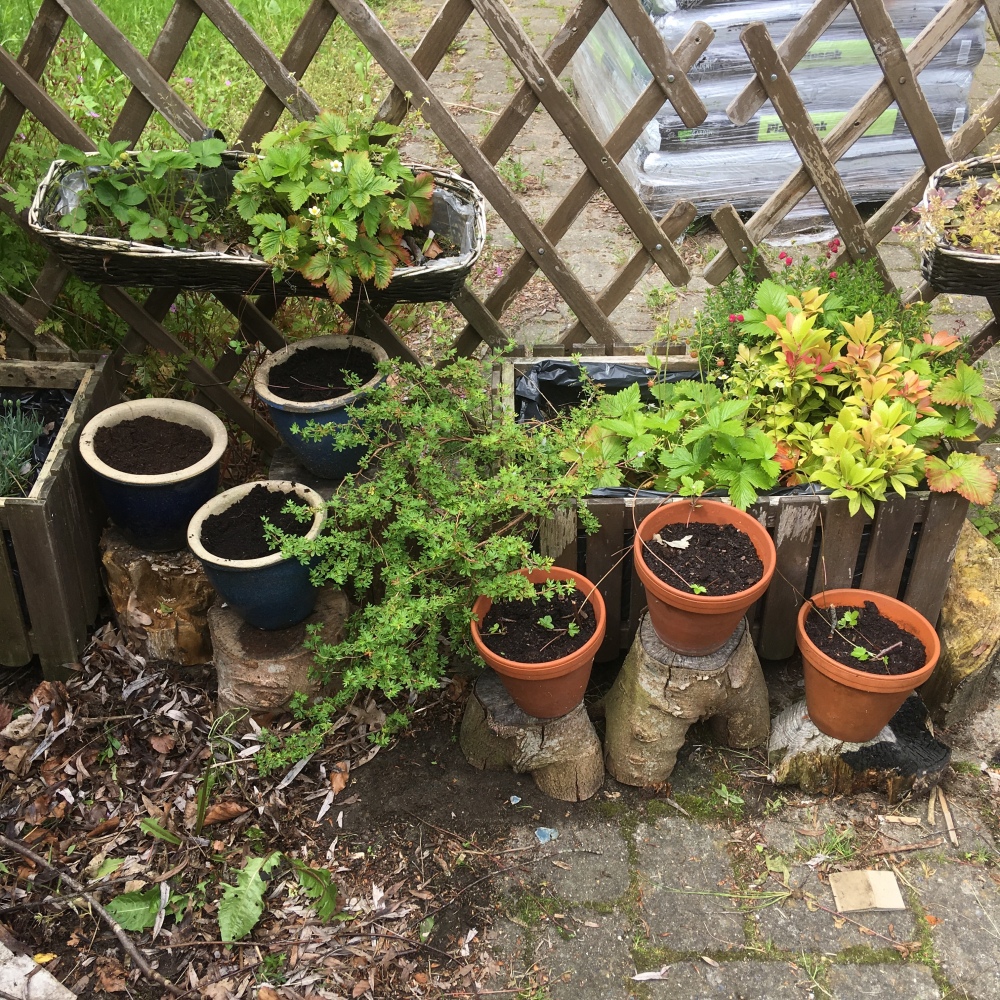 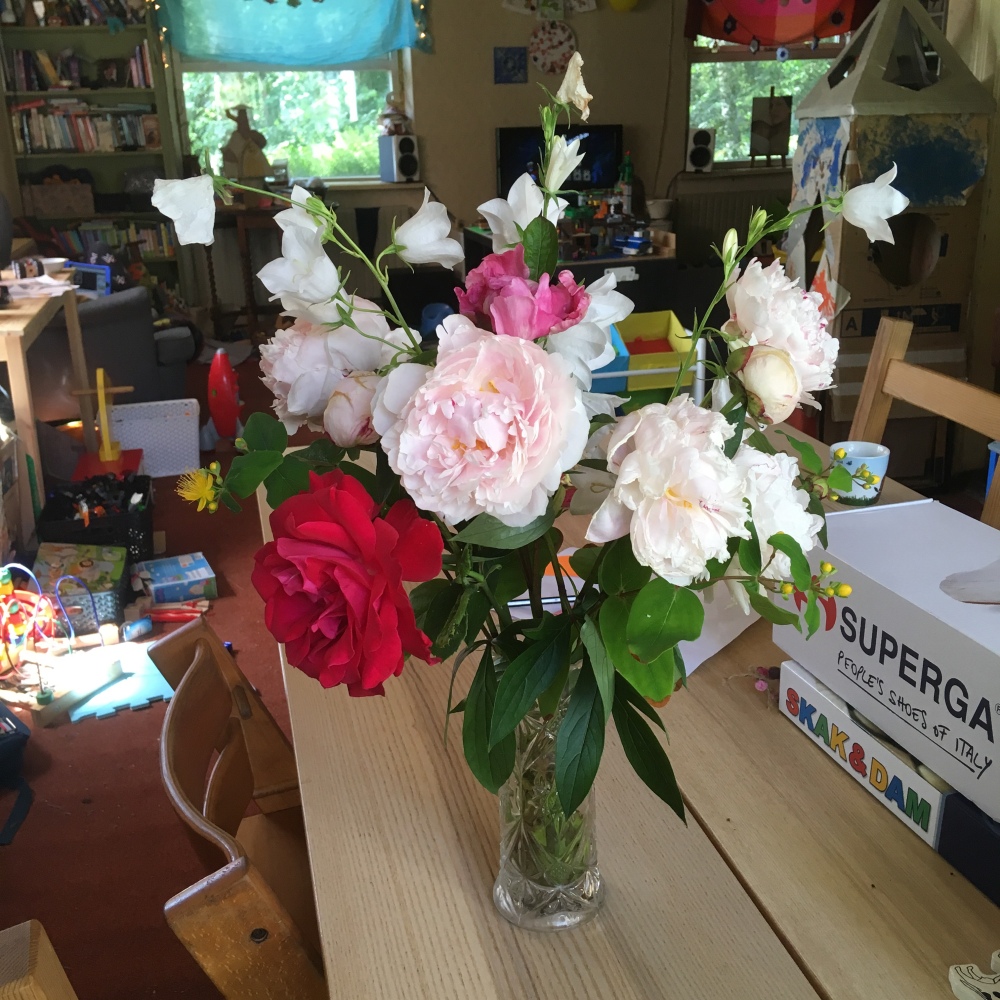 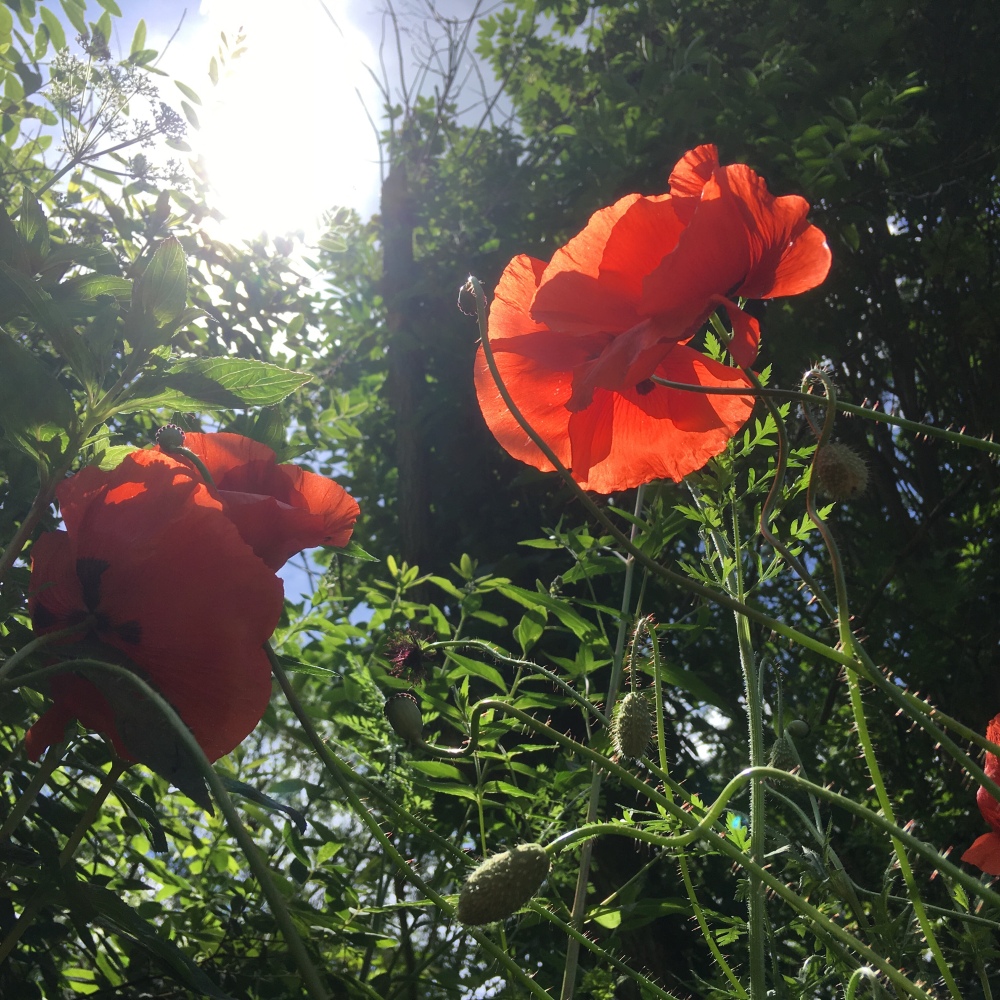 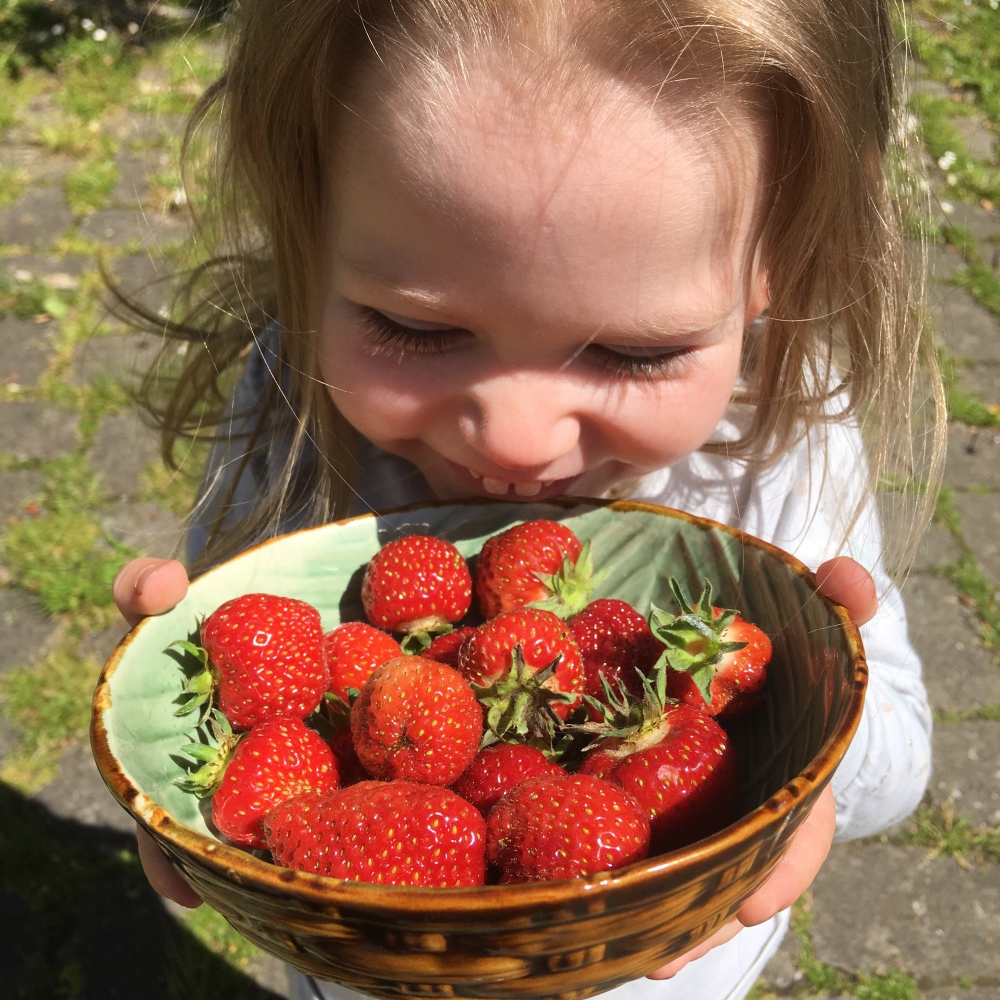 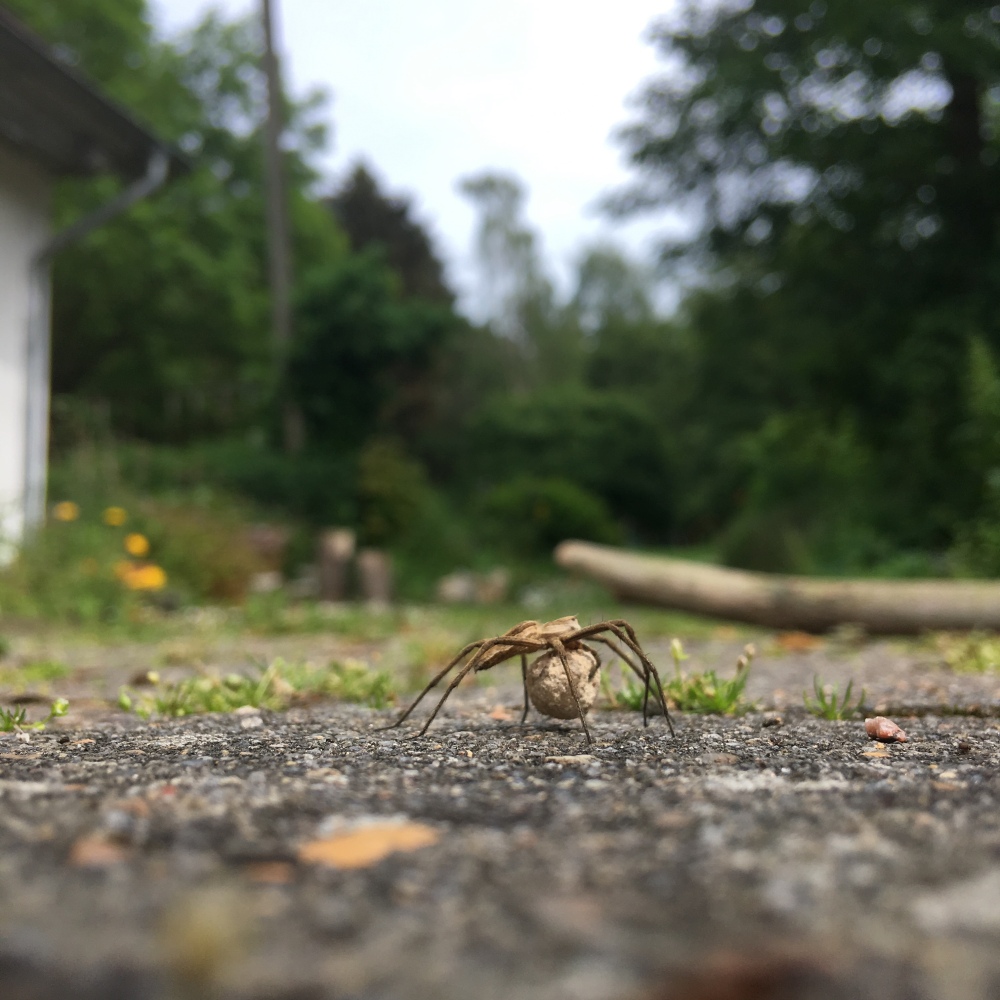 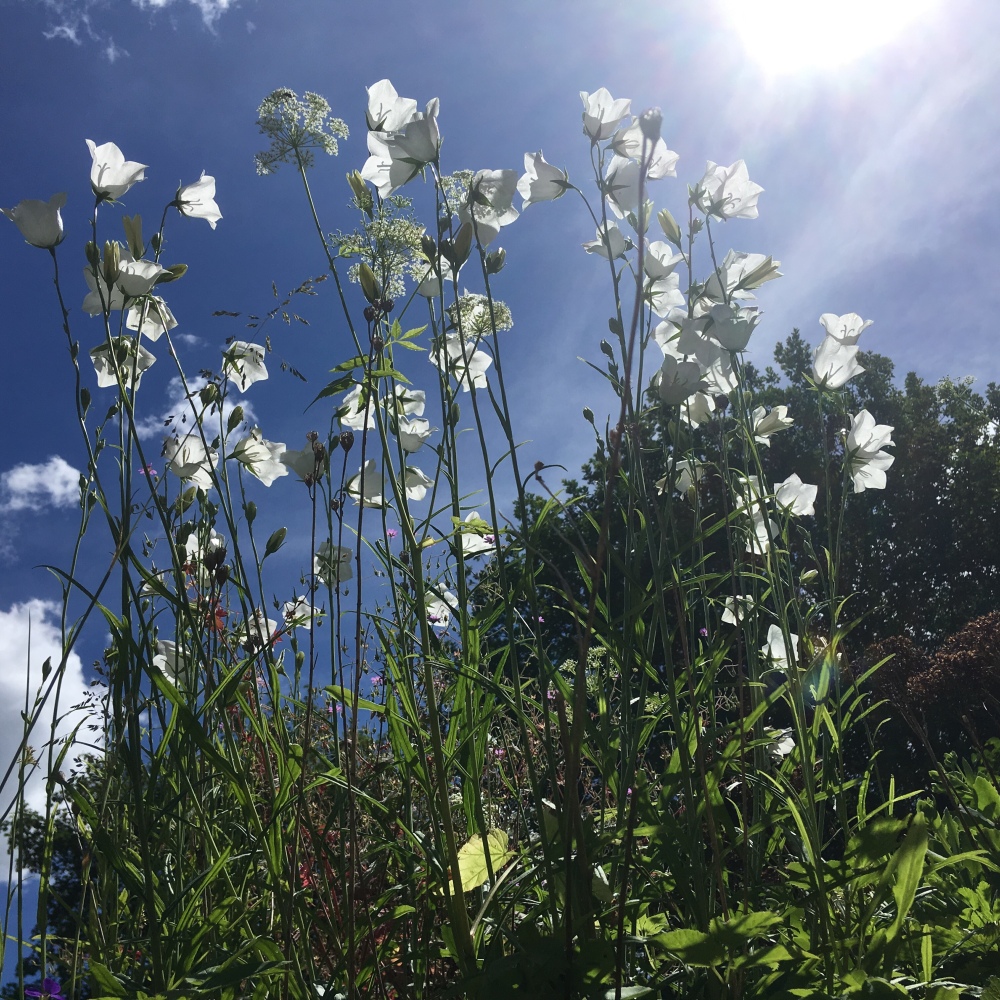 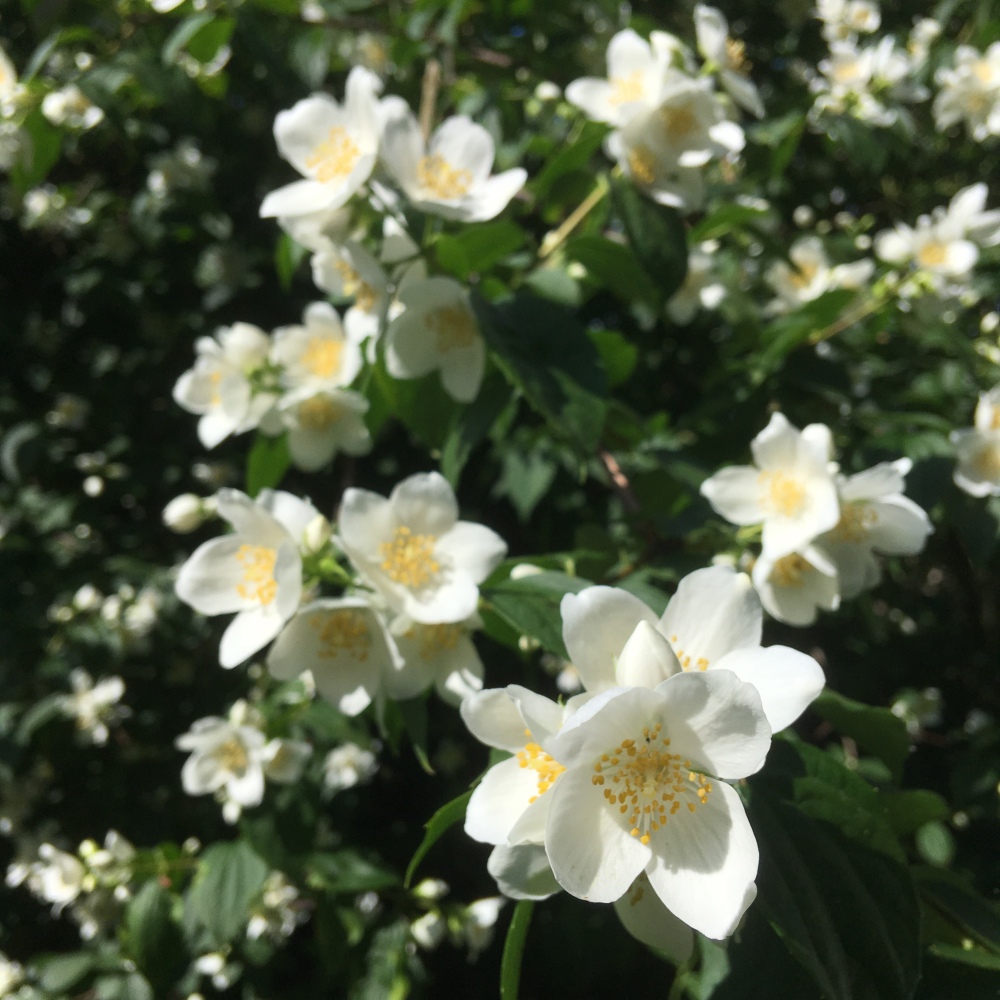 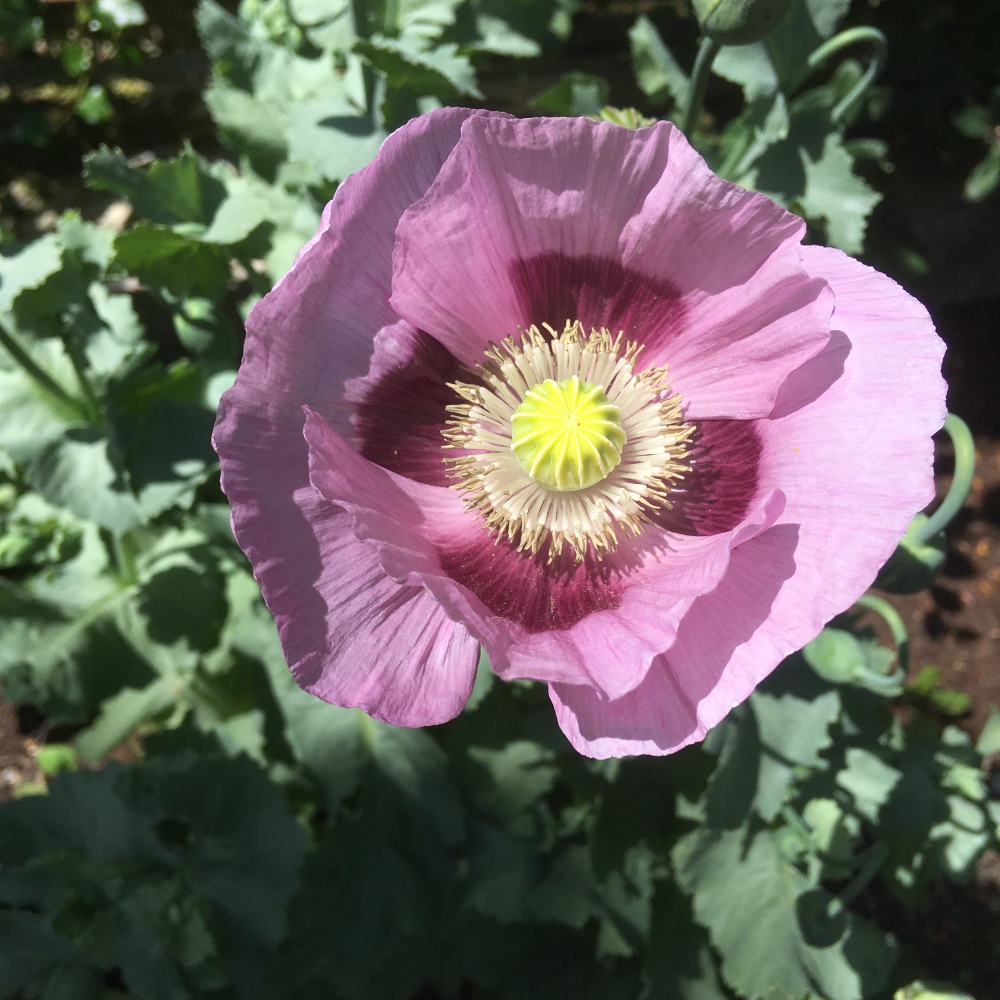 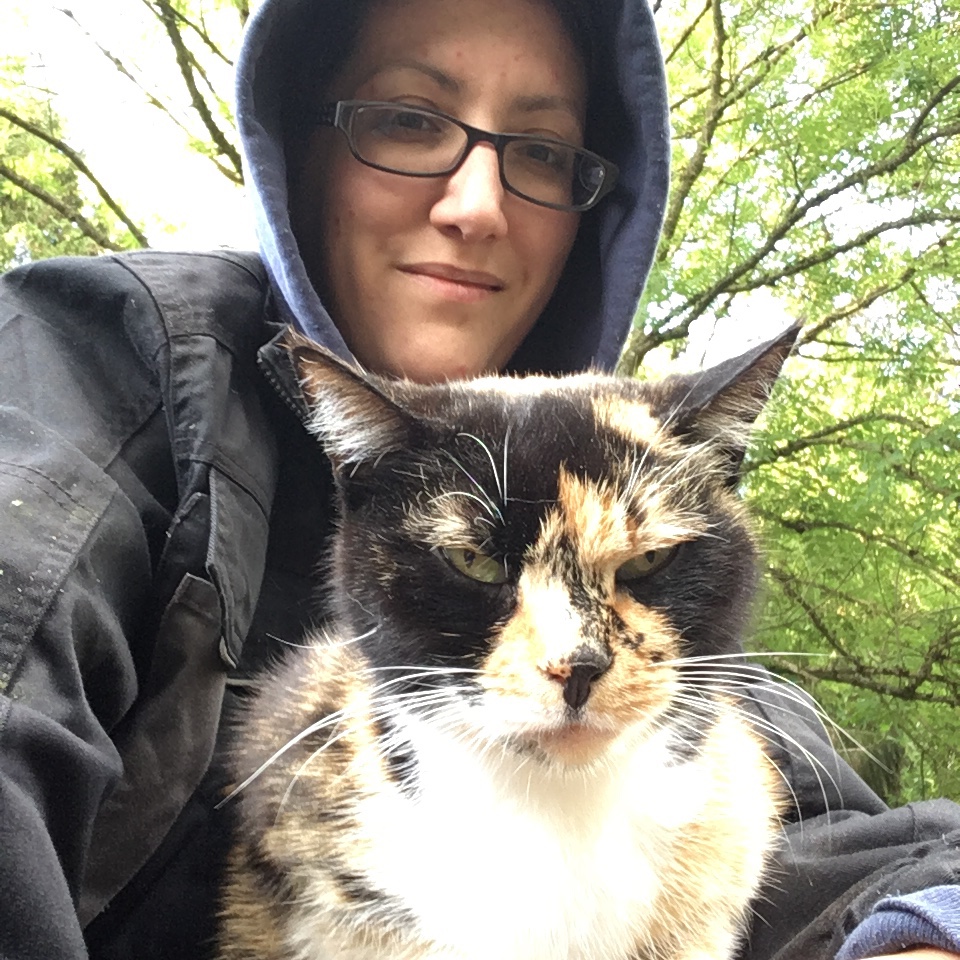