We do. We’ve been elfing since Ben was 4 I think. The elves that visit each advent have become fast friends with the boys and even at 10 and 7 years old they have STILL been asking – no, telling me – that the elves will be visiting again this year.

What I don’t do, and really honestly don’t like at all, is behaviour control. Why on earth would the elves need to spy on my children, and report their behaviour back to Santa?? It makes me feel distinctly uneasy. Christmas happens regardless of anybody’s behaviour, it happens to the best of our abilities no matter what. There won’t be any threats of cancelling Christmas. And any references to “good” girls and boys in stories (and there are LOTS) gets shortened to “girls and boys”.

For the past couple of years though I’ve had to have The Talk with them at the end of November and just after Christmas, partly because I was getting uneasy about how much of the toys coming to life they believed, like actually believed, and partly because they knew that daddy and I were “santa”. In one breath they would tell me quite matter-of-factly that they knew that it was all make-believe and they knew who was behind it all, and in the next they would be coming up with fantastical ideas of what the elves might get up to that night full of belief that it would happen because the elves are magic and toys are actually alive especially during advent. Hmm.

So we talk about St Nicholas and the fact he did actually exist (one of these years when the magic is fading a little more we’ll look at his history a bit more but that’s for another year) and how the evolution of languages and the re-telling of stories changed his name into many different forms including Santa Claus.

We talk about how “Santa” isn’t a physical person any more but the idea that he represents lives on, and that’s where the magic lies. To us he represents kindness, generosity, and selflessness. To be kind and generous without the expectation (or the feeling of entitlement, or of having earned something) of anything in return. Because kindness (and, I’ll note, this doesn’t mean being a doormat) is free. It’s often a choice, and often the harder choice (and these days it feels like a lot of the world seem to be going for the easy option of hatred of one another, but that’s another talk for another day) but it’s still free.

So we talk about who Santa was, what he represents, and the fact that toys are not alive, and they know that mummy and daddy are the “Santa” of the house, co-ordinating things for Christmas. They know the elves aren’t really alive or magical.

But we make a choice at the end of November, collectively, to consciously suspend disbelief, and enjoy and embrace the magic of the season, with the growing displays of sparkly twinkly decorations and the mischief and friendliness of the visiting elves who just come to have fun because they have become friends.

And on that note, let the fun begin! (I’ve backdated this to November 30th so I can keep everything in order.)

This, by the way, is Lumi. She’s our newcomer this year! 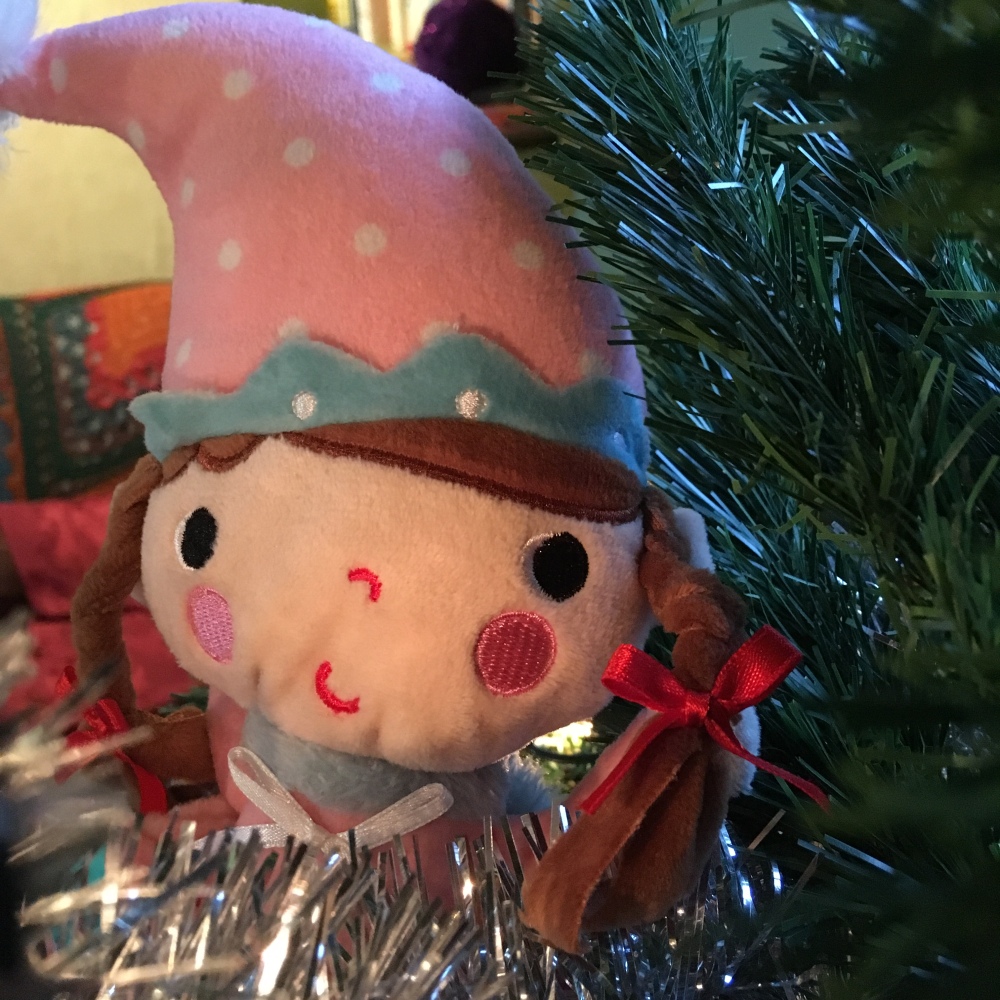