Deliberately slow day today. Nothing planned. Wrote my reminders out last night (scones for breakfast, make bread in morning, write a shopping list, crochet) so I’d remember to eat at least, and made it through til 1pm before actually getting my scones for breakfast. But I took them outside to escape the hubbub and to get some air.

Right nice, it was too.

Been pondering my journal writing. I haven’t been writing because it has a tendency to take up so much time, and I want to be sewing or crocheting and at the moment after doing the pre-bed housework there’s just no time left for anything. I think I need to set myself a sort of time limit. If it takes more than half an hour to write the day’s entry, I’m probably writing too much. That doesn’t include editing or adding photos, though. Maybe it’ll also help me to figure out how to condense the day into a manageable piece of writing!

The boys have done a lot of drawing today as well as playing together on Minecraft, and when Charley needed a chill-out Ben and Erika played some crazy games together.

Buuuut today’s naptime attempt finished me off, the overwhelm reached saturation, and that was it. It was funny, but it just pushed me over my limit of what I could realistically cope with today.

I spent the rest of the afternoon hiding either pottering in the garden or in the kitchen: weeding ground elder out of one of the borders, and making a rhubarb and ginger bread and butter pudding in the kitchen with the rhubarb that I picked yesterday. It’s been sitting in a jar in the fridge, soaking in sugar syrup, waiting. 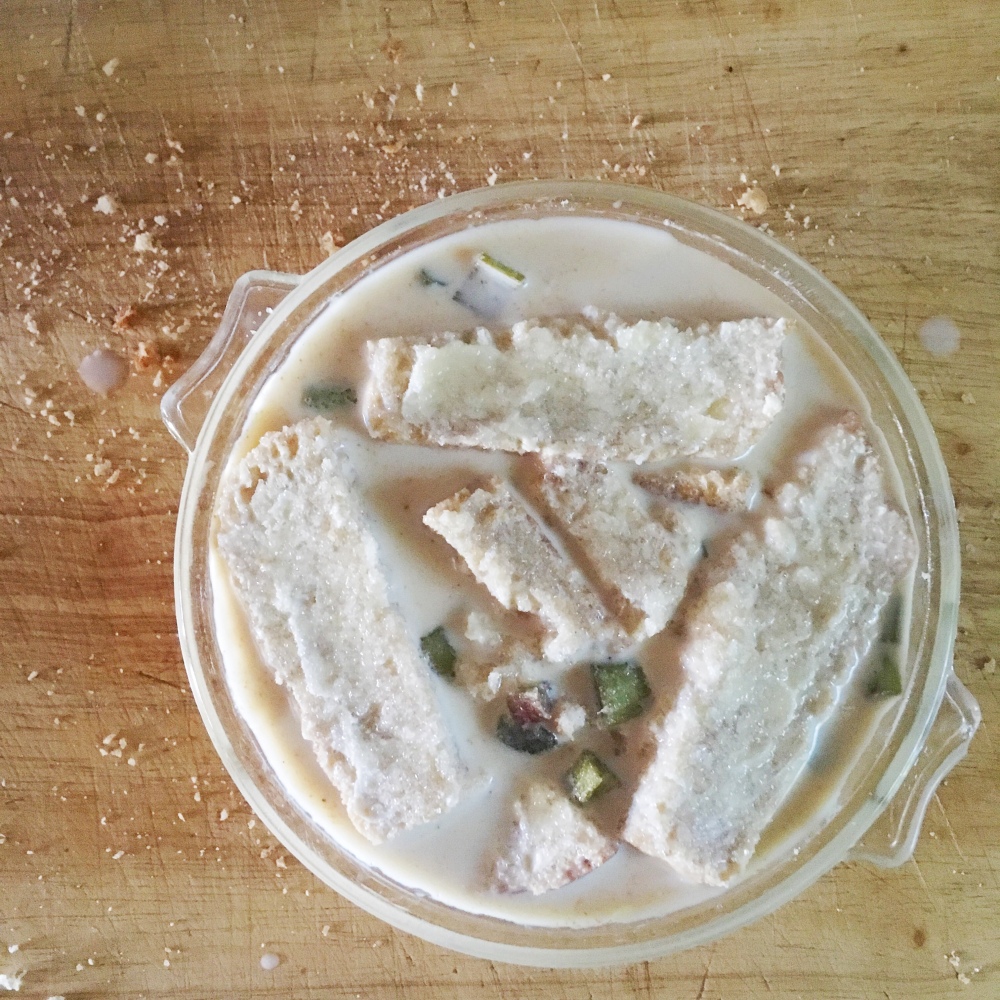 It was pretty good too. I’m grateful I was able to eat at all as I’ve had a tummyache all day from the recent patch of disordered sleep.

After daddy got home and they played together in the garden, I started to finally pull out the grasses (which have now all gone to seed haven’t they) in the big flowerbed. I thought Erika was coming to help me but she was playing hide and seek / peepo with me and two year olds playing hide and seek are the BEST!!

The kids spent ages in the sand later on, digging and crafting stories, and somehow it evolved to include water being added to the sand (of course) and boots being removed and MUM LOOK!! WE MADE SAND SLIME!! followed by the sand slime getting everywhere and them all ending up in the paddling pool, fully clothed, soaking wet and covered in muddy sand, at bedtime. 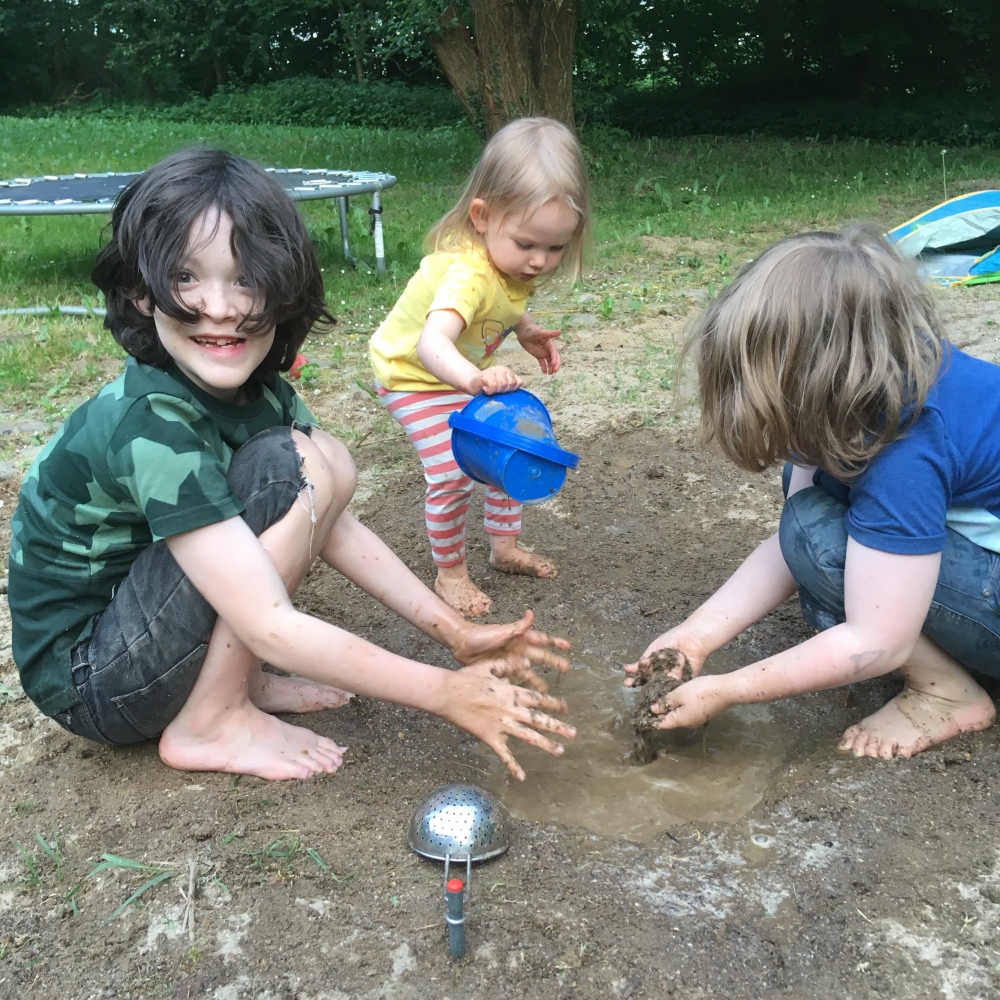 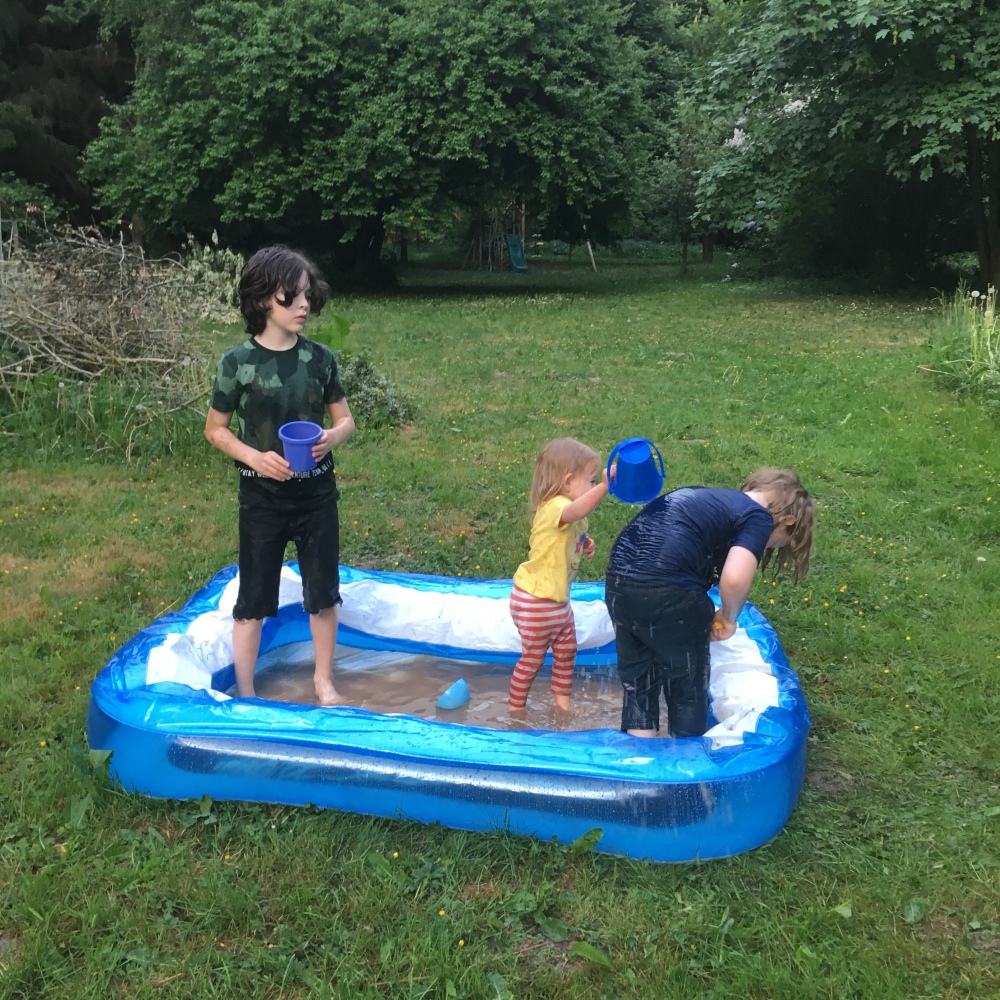 But y’know. They were having so much fun!

By some miracle we got the boys showered at least, but Erika will have to live with being a bit dusty for another day because neither of us had the energy to deal with the trauma of trying to bathe her tonight. But bedtime went superbly and I even had a bit of hooky time tonight! I’m working on some little flowers and mandalas to put on the side and back of this skirt to camouflage at least one join that didn’t work so well, but I’m not sure about the colours. Maybe they’ll be okay once I add in some embroidery as well.

Things to think about:

Rhubarb and ginger bread and butter pudding with ginger custard

(Mix the rhubarb and sugar in a jam jar, close, and refrigerate overnight. Or mix in a bowl and use once the sugar has dissolved!)

Butter a smallish ovenproof dish. Layer the buttered sourdough pieces and the rhubarb, pouring the custard over after each layer. I managed 3 layers of bread and 2 layers of custard. Almost fill the dish with custard (you might fit 1/2 pint in) and gently press the sourdough down to let the custard soak in.

Sprinkle the top with white sugar.

Once cooked, heat up the rest of the custard and serve together. I reckon this probably serves 3. (Who am I kidding. Serves 2!)