Nooo I overslept this morning! With less than half an hour before the last feasible morning bus into town, as well. Ben and I were going to go to the toy shop as he’d finally saved enough money to buy a particular Lego set he’d fallen in love with. Thankfully Steve was up, Ben was actually dressed AND had had breakfast, and the two of them were able to get ready quickly enough for the bus. Including taking all the deposit bottles back, which just isn’t possible on a work day or a school night. They made it into town, returned all the bottles and cans (at least a months’ worth), got the groceries and made it to the toy shop (which didn’t have the set in that Ben wanted!!! Gahhhh thankfully the big supermarket right next door DID have it) and out to the bus stop with ten minutes to spare. Relieved and impressed!! Meanwhile Erika and I had got dressed, I’d made another bread and butter pudding for breakfast, attempted to wake up with decaf (we ran out of my usual morning coffee yesterday and I’d put together a bulk grocery delivery to arrive this afternoon) and failed, and were just sitting down to watch Big Hero 6 when Ben and Steve returned.

We are so tired. We really need a couple of days off from wood cutting but stores were low again as we’d only really brought enough in for today, yesterday. We sat, relaxed, had something to eat, fed the kids, and Steve and I watched Big Hero 6 together while all three kids sat around (or on, in Erika’s case) the table building Ben’s new lego set.

And then Erika melted down over something because she was tired and for the first time in ages she fell asleep before 3pm. Naptime! Boys were happy playing with lego, girl was asleep: time to see whether there were any easy pickings to be had in the woodland.

Turns out, there really was. On the side next to the brook there’s mainly birch and in one section at least there’s several fallen down, bringing others with them. They’re also all growing far too close to each other so they’re never really getting that big. In one section about 2m by 10m it was like playing pick-up sticks just on a much bigger scale, all the dead wood just collapsed on each other with very little brash to clear away to get to it. Now’s the time to try and clear it up though, there were thorny saplings all over the place and skinny jeans are NO match for thorns!!

Erika woke up in time to help us bring all the logs down to the yard for processing. She got distracted by the trampoline though and squeaked and cheered as she bounced and we went back and forth carrying logs, then rode her trike up and down as I cut the longer pieces down to more manageable lengths.

We brought in a LOT of wood this afternoon and we’re nowhere near finished clearing that area up. Hopefully though there will be enough in the woodpile for a good few days now, to give us a bit of a breather as we are both exhausted. 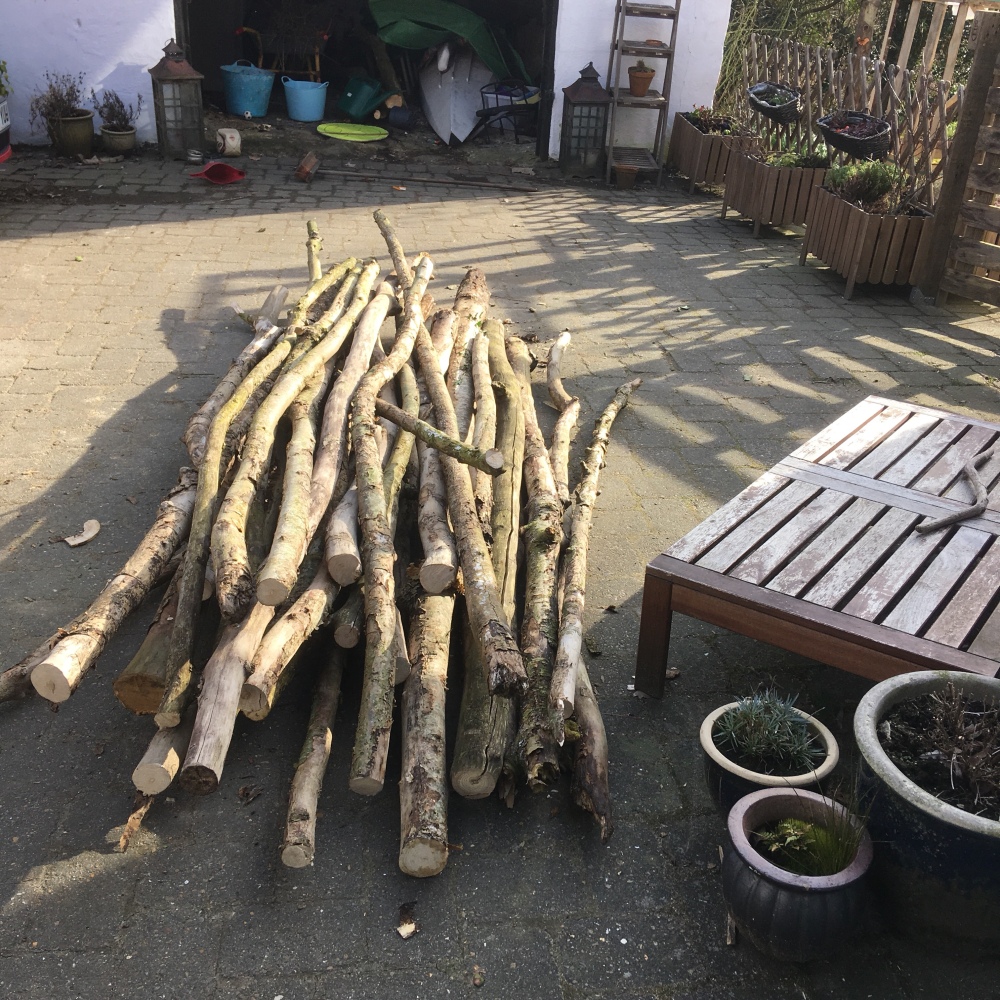 Look how beautiful the carvings on the wood are though! I think these must be from woodworm or some other wood-boring beetle but they are so pretty. Most of them look like an alien artist has visited and carved out hundreds of pictures of trees, on the trees. Some of them made me think of alien glyphs! Incredibly beautiful.

I spent a happy hour upstairs with the boys just before bedtime. Ben especially wanted to show me the lego world he was creating up there, and as happens when I spend any amount of time in the lego room I can’t help but start picking bits up and putting them away. A lot of the loose pieces on the floor are a result of trays being tipped as feet catch the edges. The boys saw my small efforts and realised that actually it was making it nicer to play and build in, and then Ben realised that actually he’d rather tidy up than go to bed!! So he wandered around returning found pieces to their right places as I gathered small piles of bricks for him to look over quickly. They’re finding balance again, the boys. Well, Ben is. Charley is still trying to find the activities and things that really bring him pleasure. I think as the days warm up we’ll be able to use the upstairs space a little more for the odd painting session perhaps: somewhere where we don’t have to put everything away in a hurry when Erika wakes from a nap. Goodness knows what we’re going to do when she finally does drop her nap!!

She came strutting over after the boys had all gone to bed wearing a baseball cap back to front and her tiger ears, and then proceeded to put them on me. And cheered when the tiger ears stayed on 🙂

And I finished my cardigan sleeves! Decided to rip the mistakes out – they would have irritated me, it’s true. But they are done and I’ve made a start on the body at last!