It’s been a little over a week since the last “stuff I’ve found growing” post so I thought I’d do an update!

Most of the crocuses I’ve seen so far have been solid purple so this purple and white one caught my eye today, and the cheerful little eranthis are everywhere bringing sunshine even when it’s raining.

Top onions given to me by Lisbeth! I have no idea really what to expect these to do but I’m glad they survived both the move and the winter! 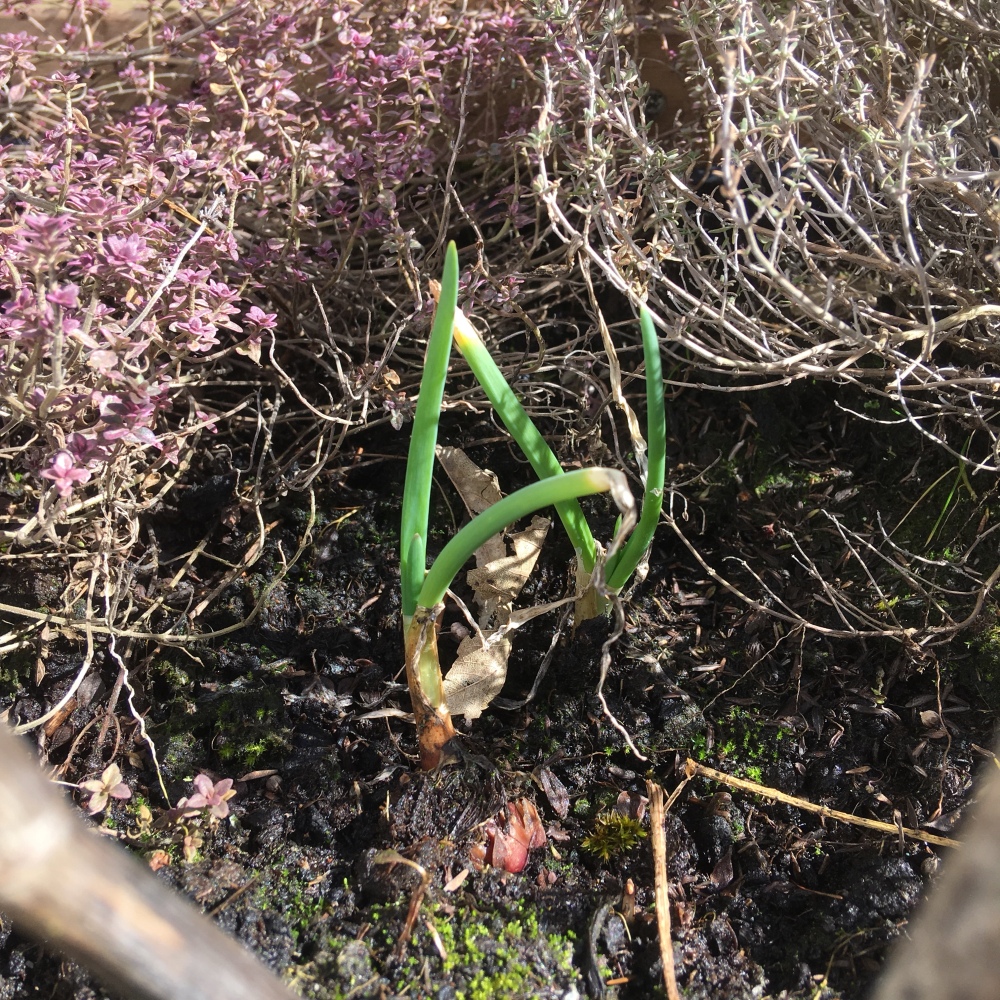 The fennel has survived too… or was this one dill?!!

There are clumps of daffodils EVERYWHERE. And there appear to be several different varieties so I’m looking forward to watching them flower. 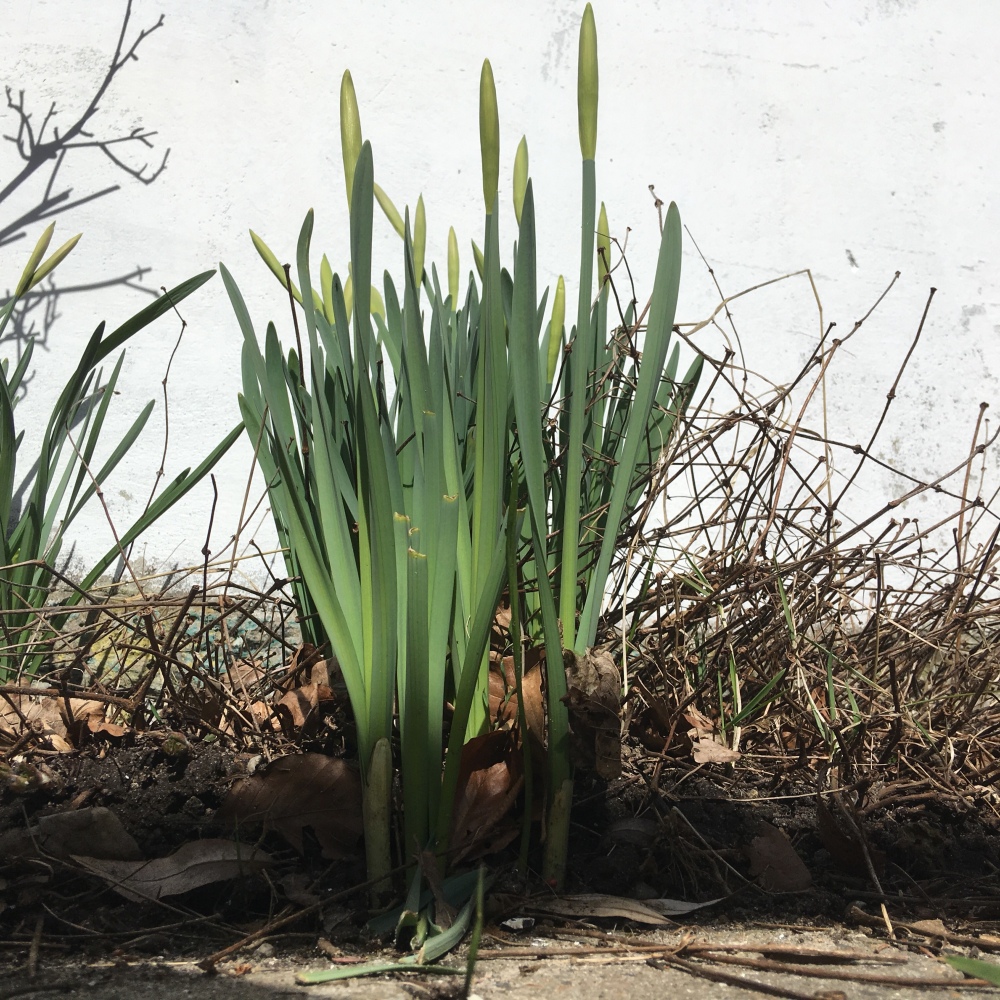 This planter used to be the mud kitchen so it’s got a lot of gravel mixed in with the soil. It hasn’t had much sunlight yet either and when I decided to sort it out it was still full of ice! But the sun is starting to reach around to it now, and I’ve put the azalea in that some of our neighbours gifted to us when we moved in, plus the hyacinth that made everyone sneeze so badly last year, some pinks that survived the move, and some other random bulb that I found half dug up – might be a tulip, who knows! 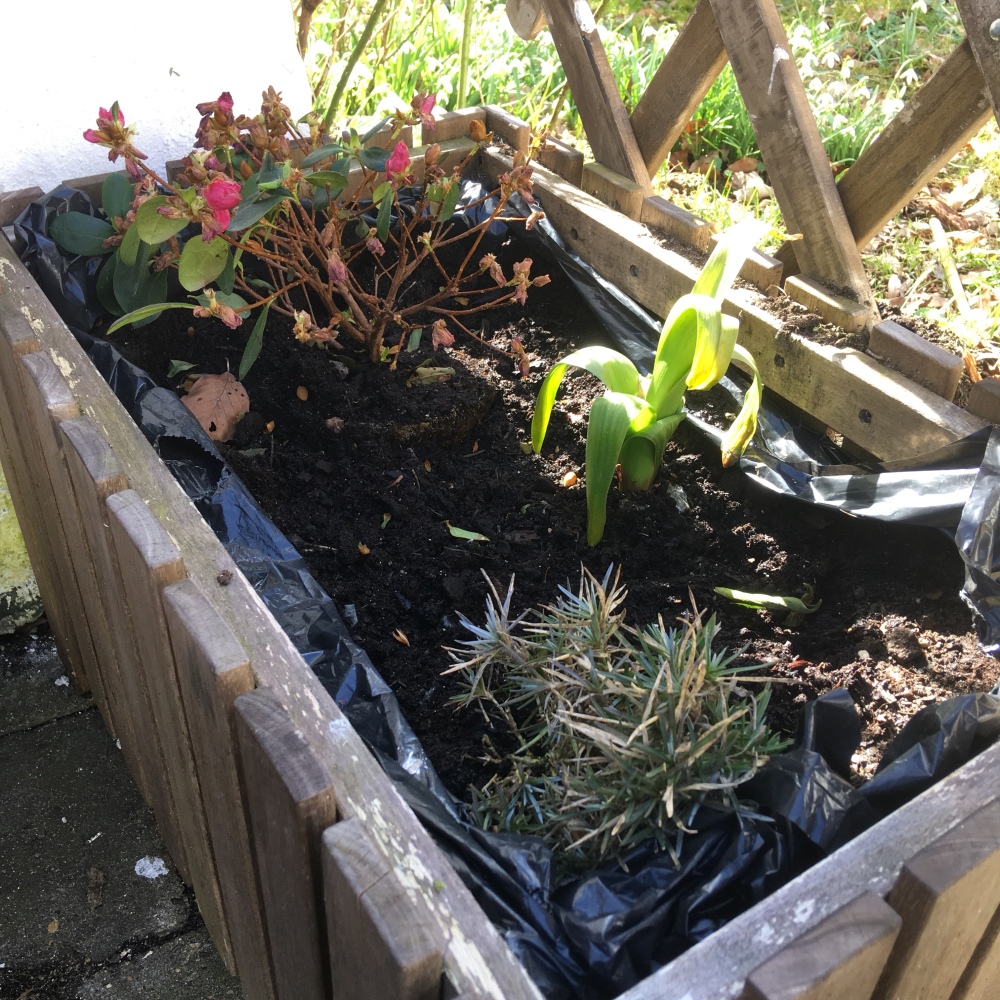 Alpine/wild strawberries that Mette gave me! So relieved that these survived the move and the winter. Reminds me that she also gave me peas to plant, and I need to find them as I think I have the perfect place to plant them! 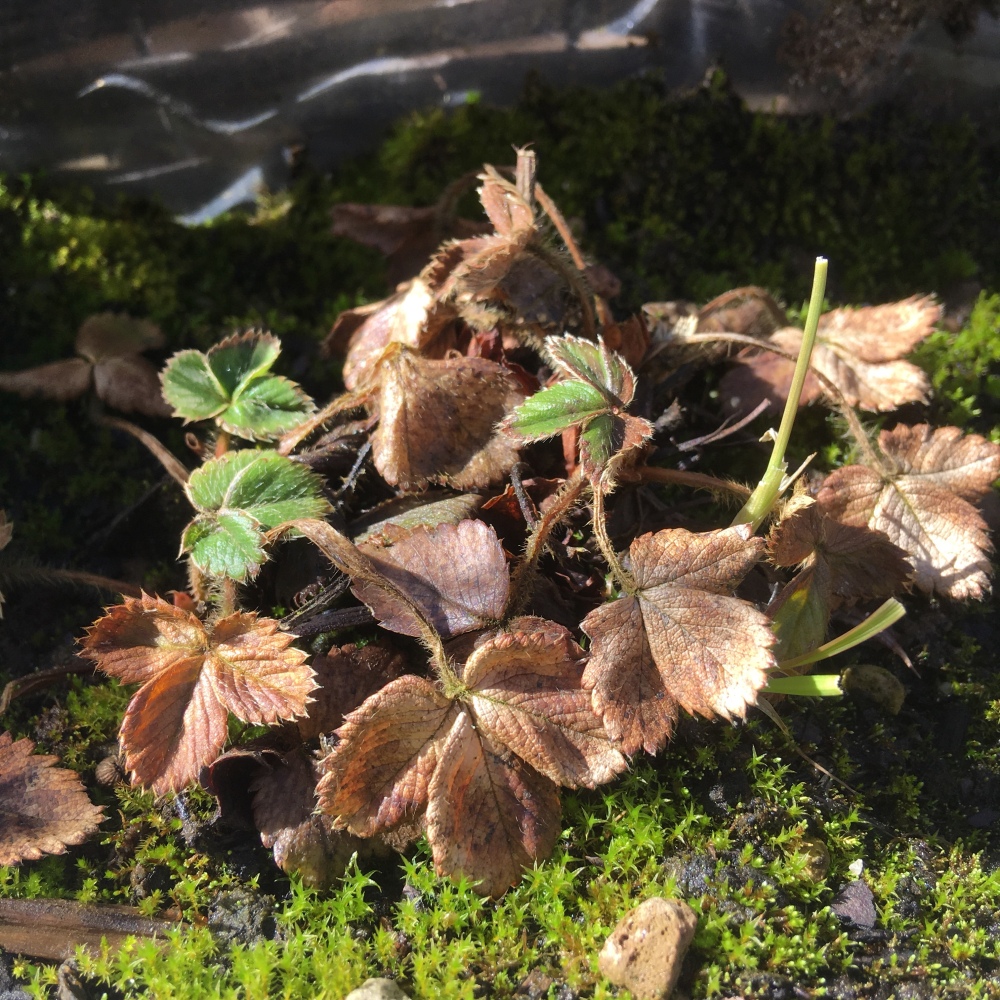 Goodness knows what these bulbs are growing under the acer. I vaguely remember putting them there but no recollection of what they were! The acer itself is covered in tiny red bud spots, I’m looking forward massively to that coming into leaf.

Found this little rose growing in a tiny pot in the shade of the garage and decided it needed planting. I’m going to assume all the roses here are pink or red until proven otherwise – if any turn out to be orange or white I’ll be incredibly happy! 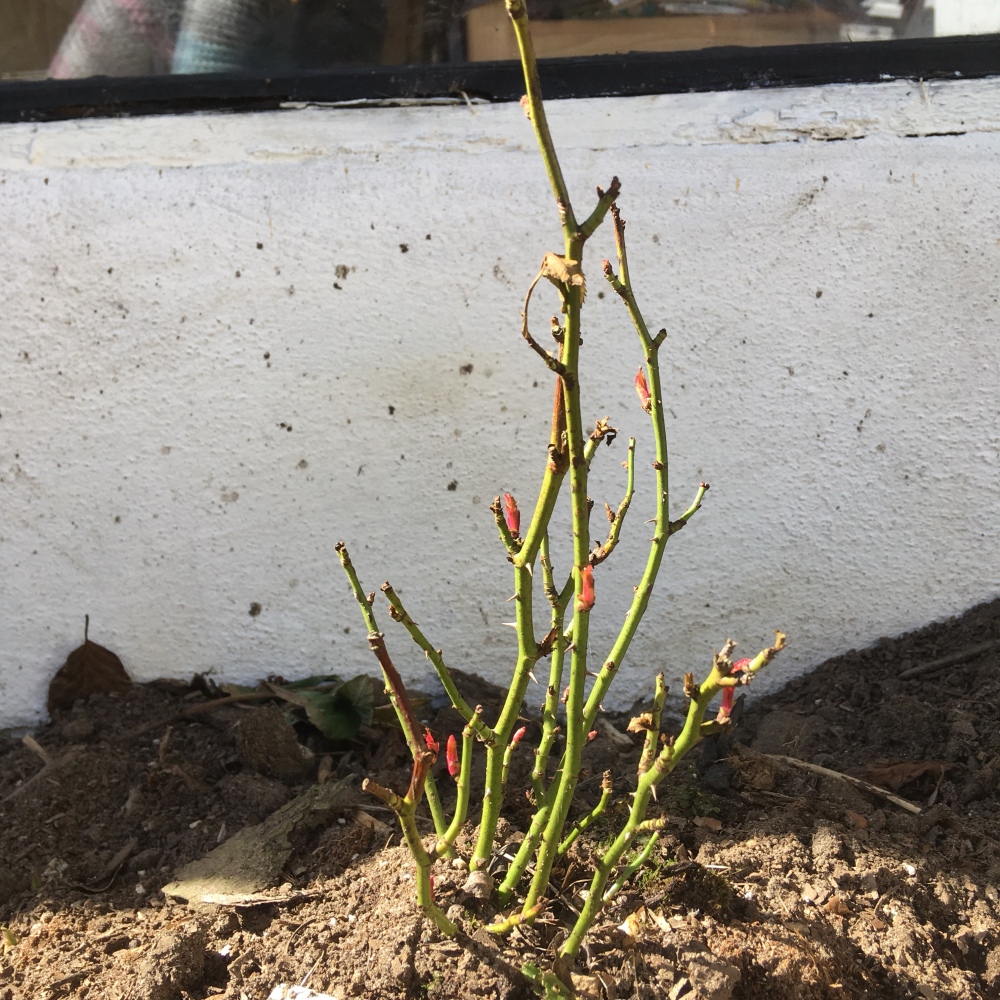 This big guy was hiding under a pot that I turned round. The pot has a little conifer in it which I’m not sure whether to re-pot or not…

This pot is unfortunately full of nettles. There are nettles EVERYWHERE. If we had goats already, or didn’t have young children, they wouldn’t be such a problem but we don’t yet have goats and a single nettle sting is likely to be enough to put the kids off playing outside. They’re all over the vegetable garden, around most of the fruit trees, near the barn and along most of the woodland edges. 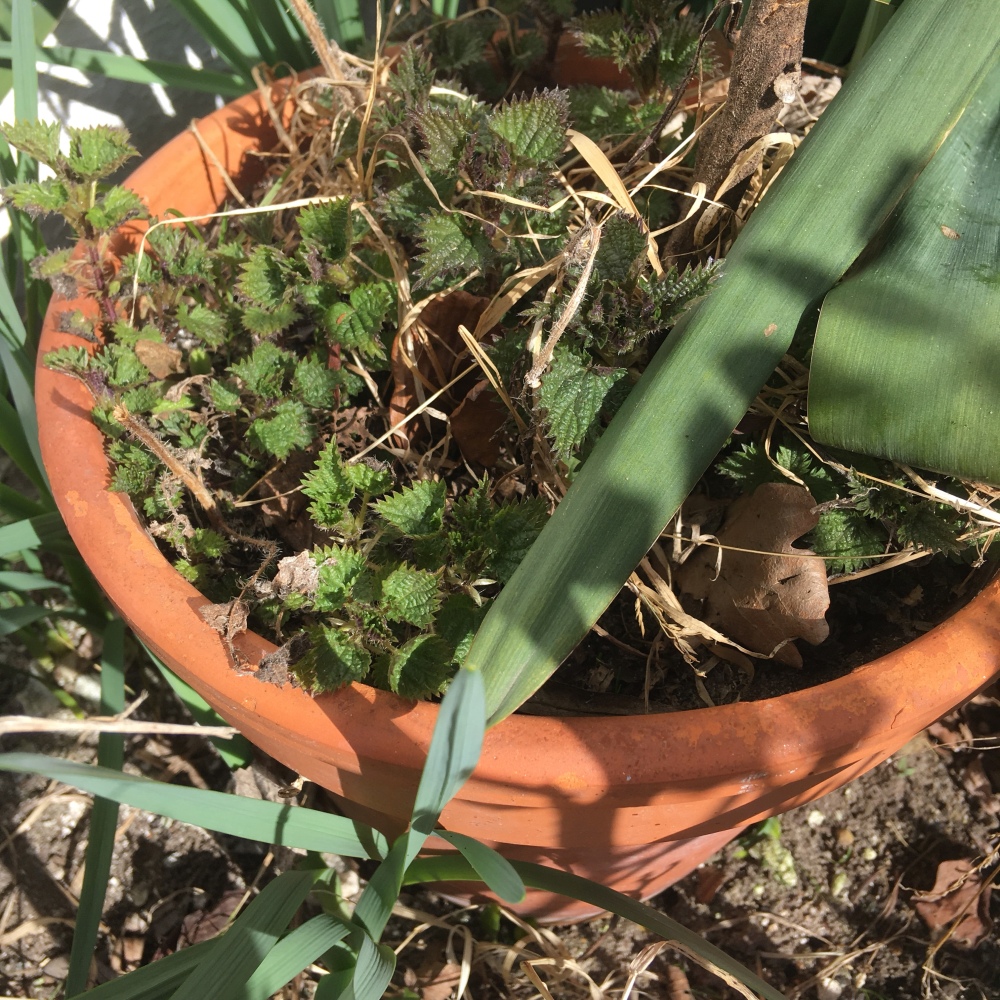 This planter had lemon mint in, and a strawberry mint runner given to me from Sviv. I’m hoping hoping hoping they have both survived the winter. Maybe they just need a little more warming-up time still. They could both do with re-potting into something more suitable and I think some of the pots on the patio might be just right.

Again, not a clue. I don’t recognise them. They are very distinctive, in that if you picked one it would lay flat, the way the leaves are growing. 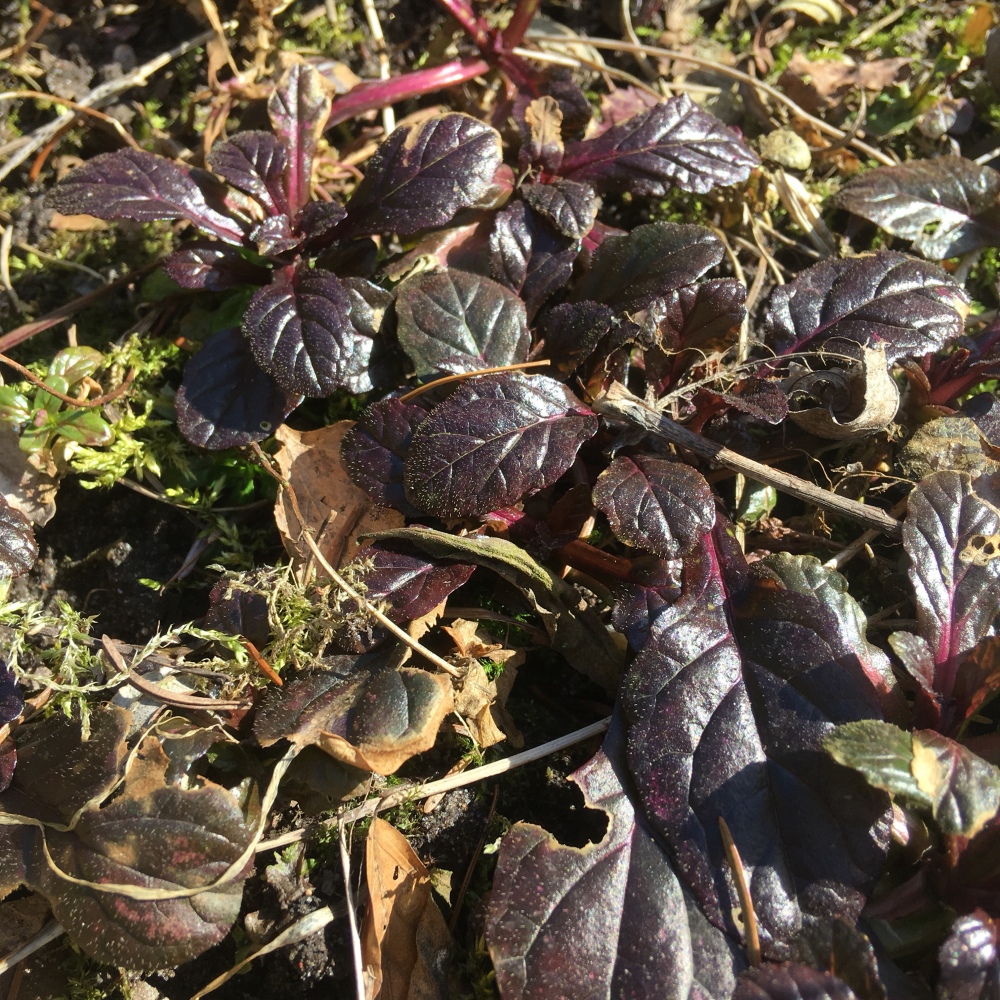 Fresh green leaves on the rose bushes! Need to read up a bit on how to prune roses so they don’t start entangling everything that comes near. 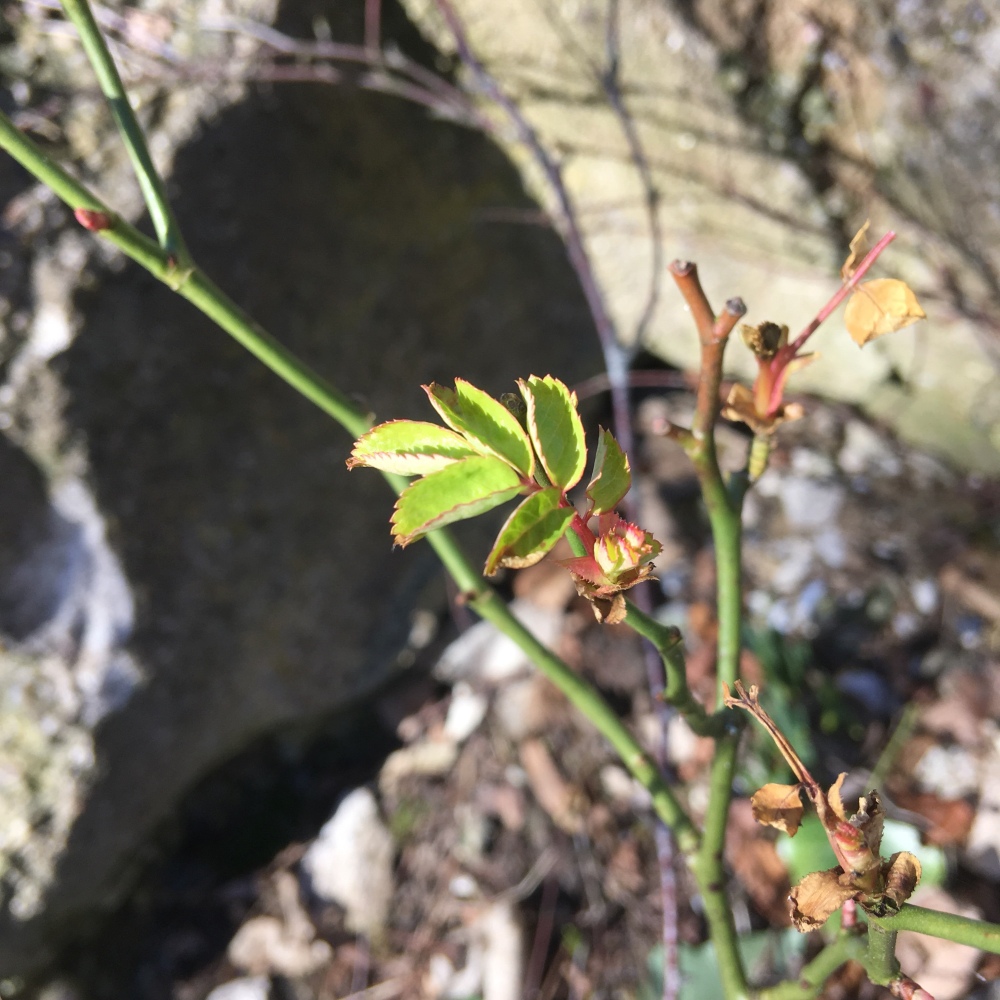 Bog rhubarb. Possibly. If it is, it’s what I used to call an umbrella plant when I saw it on walks as a child – it had such huge leaves that looked like you could use one as an umbrella (if you had gloves on)! It’s guarding the entrance to the ash heap so it ought to be interesting to see how much access remains once that’s in full swing.

And I tidied (ish) the porch. Rescued yellow glazed pots, one has an assortment of budding twigs to see if they will open into leaves. Definitely corkscrew hazel and horse chestnut in there, but I’m not sure about the others. Daffodils that had had their stems broken, by snow or cats I’ll never know. Daffodils I bought to cheer myself up. Boxes of seeds, mini gardening tools, a pail of potatoes that I need to do something with, and a tiny treasure basket for all the random things we come across.