We woke to find yet another light dusting of snow (and freezing point temperatures – what a difference from the weekend!) but by late morning it was drizzling and as the temperature rose in the afternoon the fog descended as well. Delightful April weather. We definitely had the best Easter bank holiday weather that we’ve had in a very long time!

and it might not look like much but trying to do anything in between normal kids stuff and fire stuff and nappies and toilet and back-to-work grumpiness (yes it affects home ed families too!) is a big effort! But today I DID it. 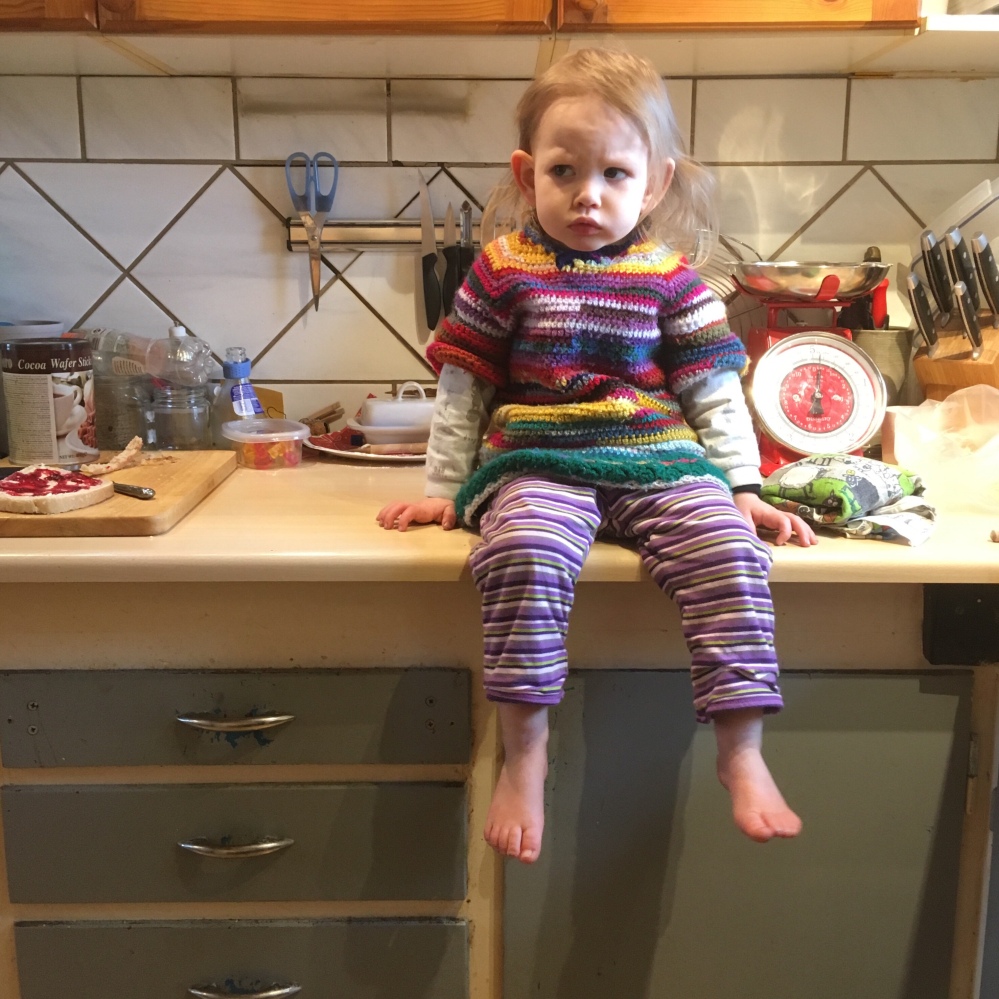 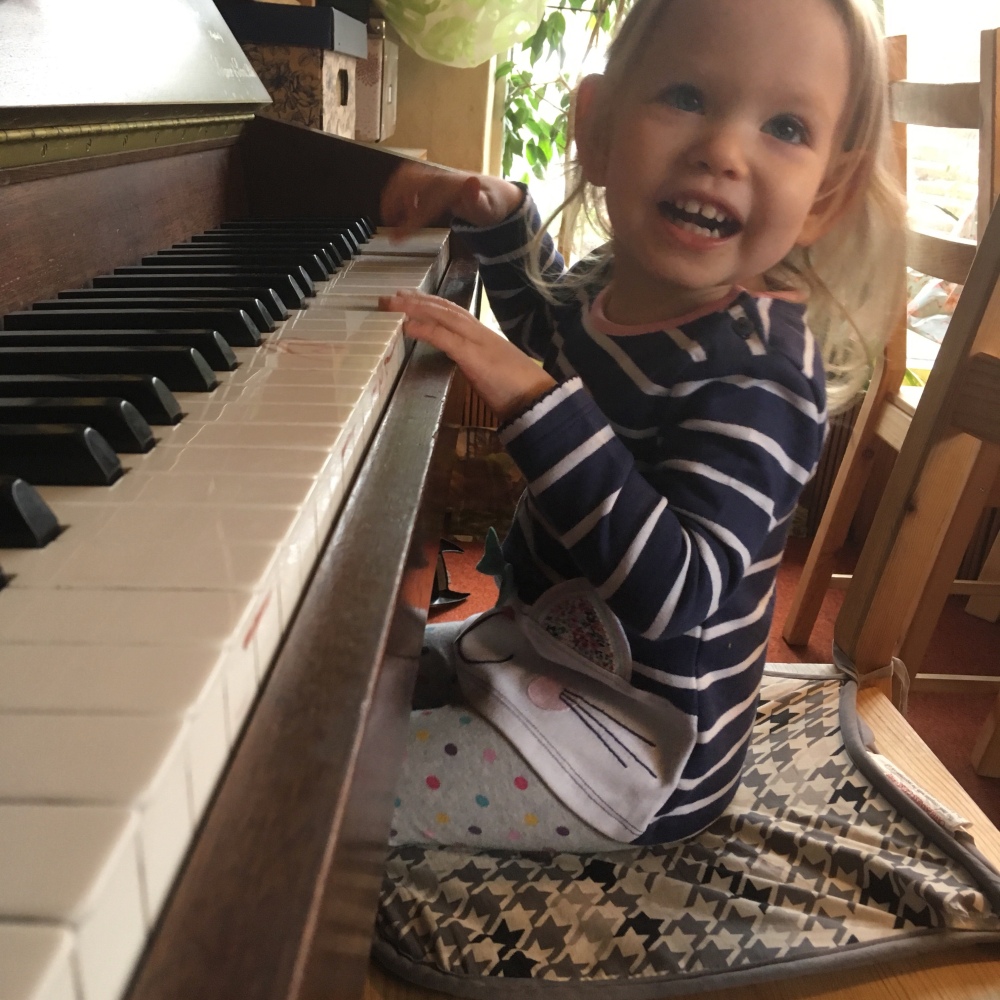 And not only that but before Steve got home I’d headed out to the woodland in the drizzle to find a tree to bring in for firewood, got called back to type in a command in Minecraft, got captured by a just-woken sleepygirl, and when Steve got in I abandoned him with the kids and ran off back to the trees where I’d left my tools! 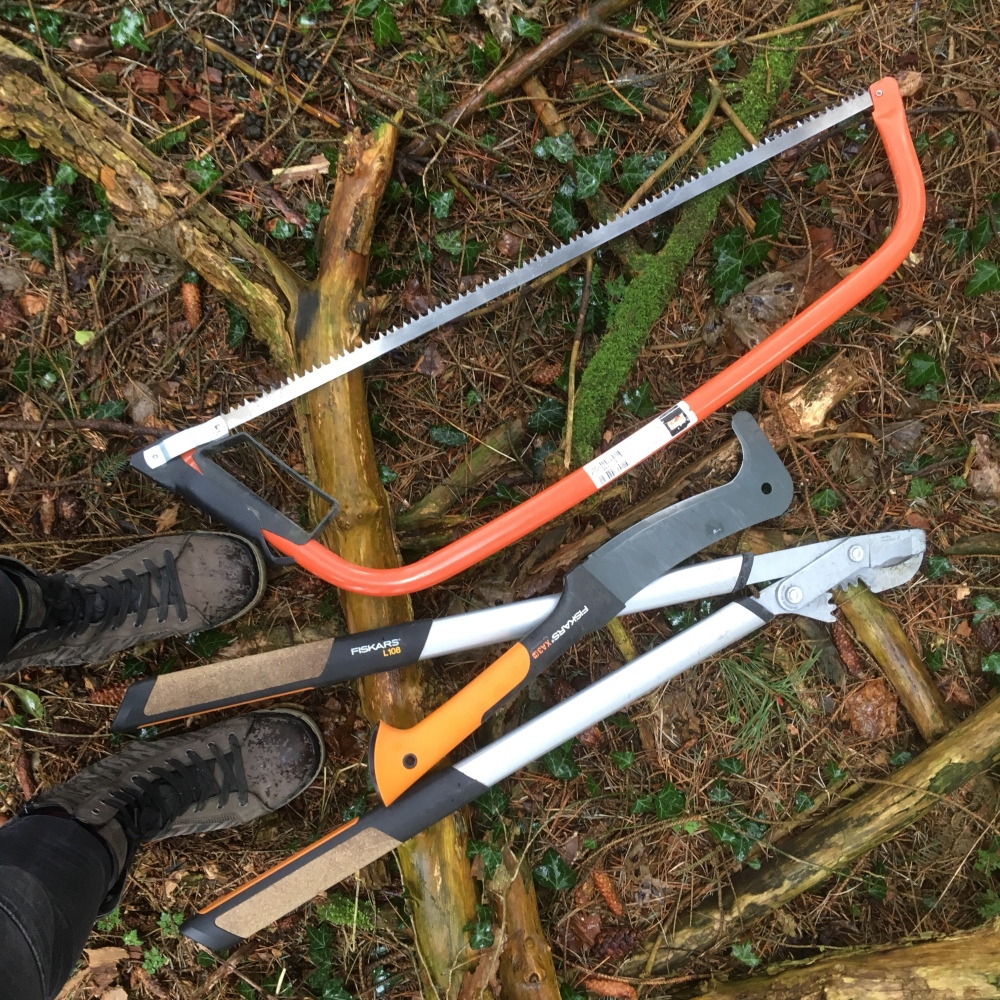 I wanted to at least find a tree to start processing to bring in for firewood. I found a couple, after hacking my way in and tidying up a bit. Yay, this one is not just dead, but wobbly too, I bet I could push it over…. I did briefly wonder why it only appeared to be half a tree, but only briefly because I pushed it over really easily and the branches of the tree next to me broke the fall of the other half of it as that half almost fell on top of me!! Lesson learned – look up first as well!! I processed both halves ready to bring back though, and went looking for another tree, completely not put off by having almost had half a tree fall on me. Found another good candidate, checked to make sure half of it wasn’t going to fall on me, cut a notch in on the side I wanted it to fall on, cut away at the other side, and as I was getting ready to try and push it over Steve appeared. Which was good because as I pushed it over its canopy got snagged and Steve had to wrestle it down. But he did it, and then left me to process it by myself – and I did! All branches lopped off, sawn to moveable lengths, and when the horn honked to let us know the kids needed us (there’s an old bike horn in the porch so they can honk to get our attention!) Steve left me to finish off. Three trees processed and carried down the the yard and this time I did most of it! 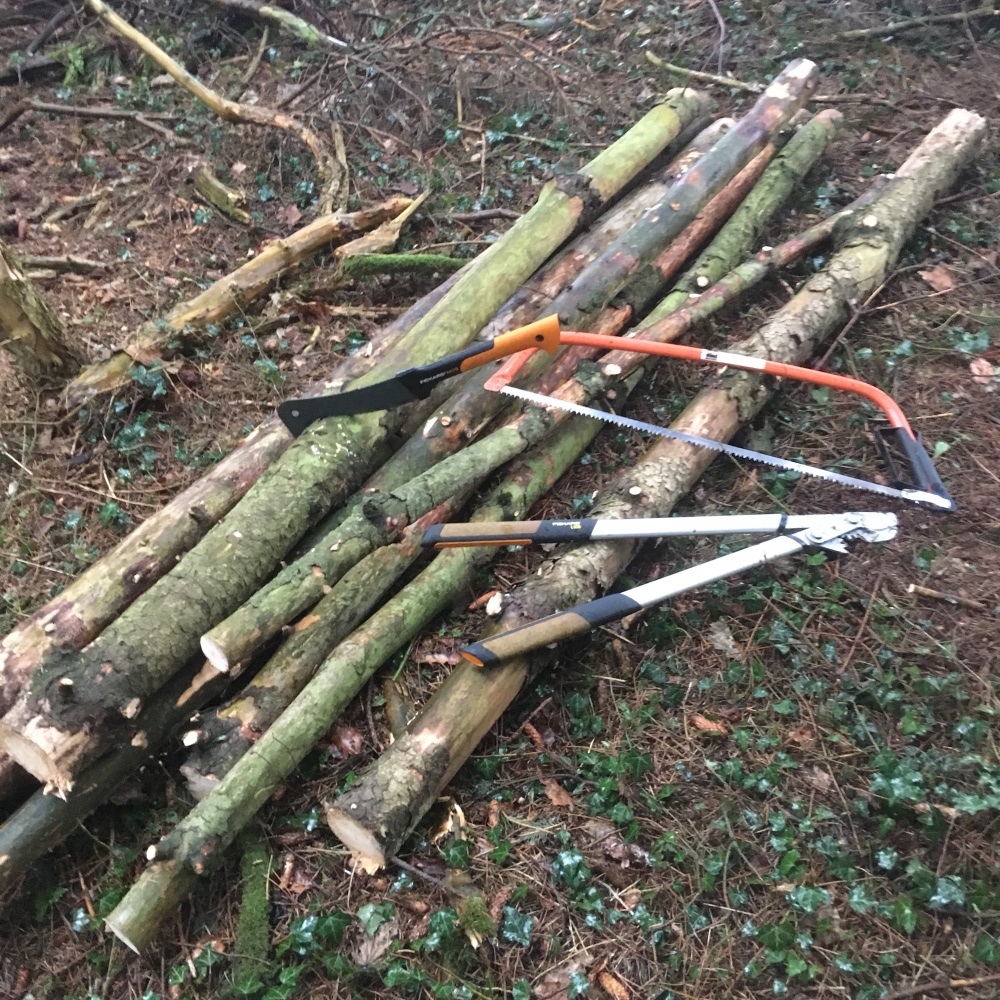 Bloody proud of myself for what I’ve learned and achieved this week, from using a saw to felling a tree. My body is getting more tired more quickly each day though so I hope it realises sooner rather than later that this is actually the new normal!

Steve took this picture of me when I’d finished processing “my” tree. It brought up a lot of feelings…. the first ones were along the lines of how I wished I could have looked slightly more glamorous, more posed and poised, and not so much I’m exhausted and it’s raining. But I looked at Steve as he took the picture and as he looked up and at me, his expression was full of love and admiration and “my wife rocks!” Not even a care given to looks, although I know he thinks I’m beautiful. It made me wonder why I feel such a need to have the picture perfect pictures. Why do I want to portray this life in such a rosy fashion, to glamorise it? To glamorise me? I am who I am, I am part punk, part hippy, mostly anxious mess. I really don’t need to look like I’ve just walked out of a salon when I’ve been sweating for an hour in the rain working in the wood. I guess I’ve been taken in by social media pinterest picture perfect lives too. I do love styling pictures though… that’s not going to stop… and I still hope that I’ll get another picture perfect (to me) picture of me at work in our woodland soon!

Oh yes and this was dinner… pizza dough pizza roll. Except I spread butter on the dough AND then added grated cheddar and sliced pepperoni to the pizza sauce and mozzarella and although it cooked through and appeared to have risen beautifully, it was so saturated with fat that the dough in the centre couldn’t breathe to rise! It was absolutely incredibly delicious though – so tasty and fatty and … well, dirty! No other word for it haha. And exactly what I wanted. Yum. 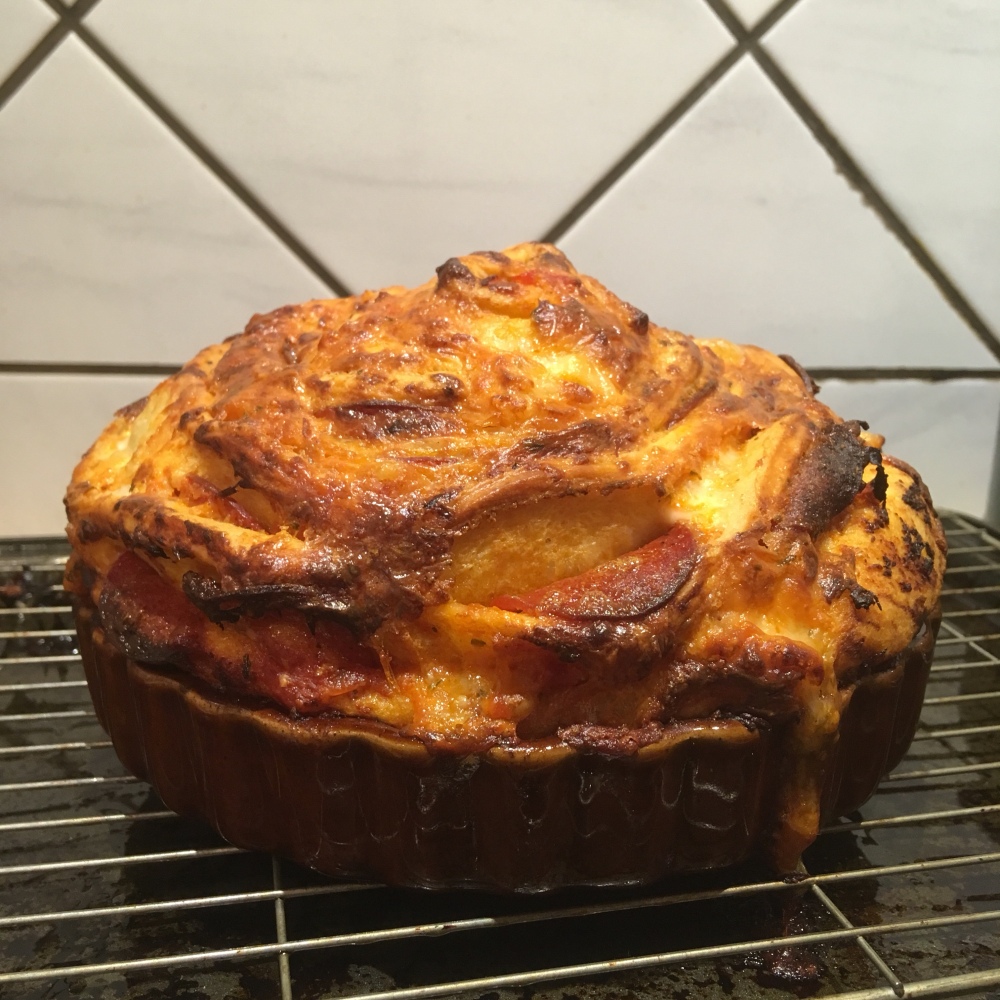 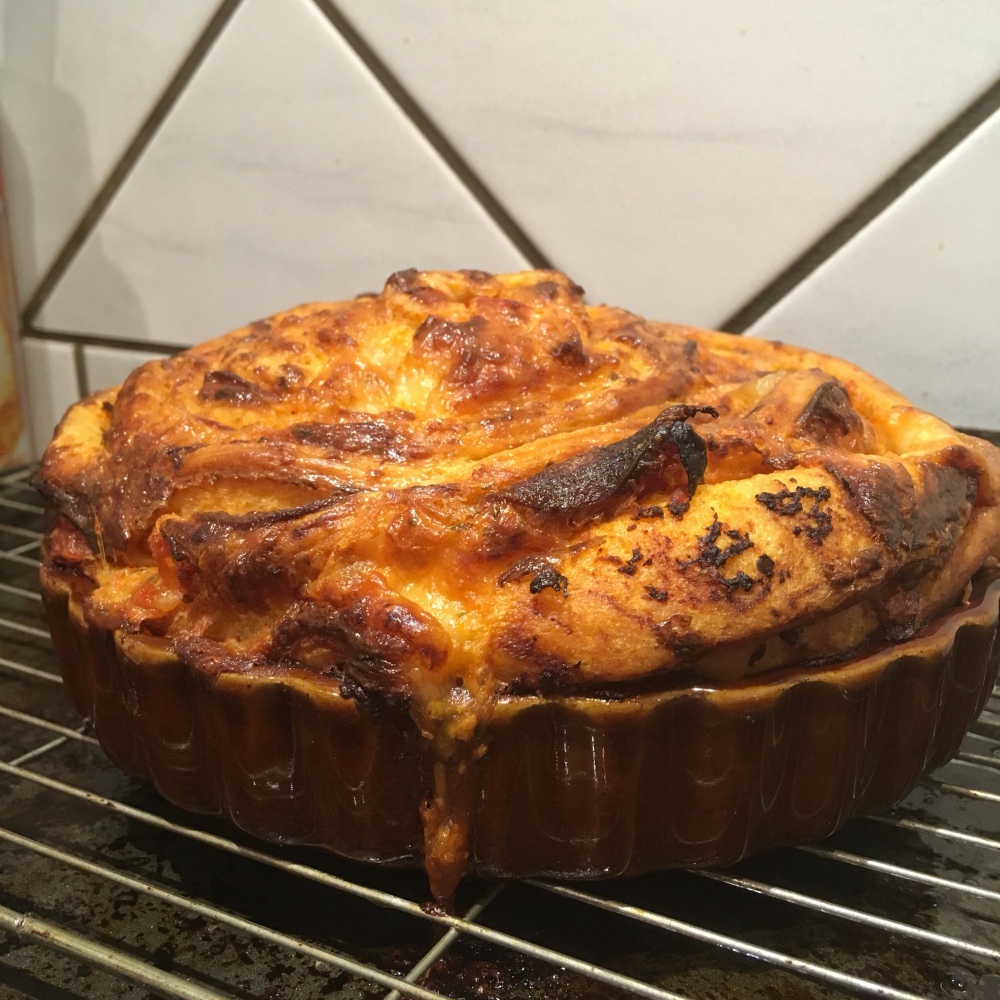 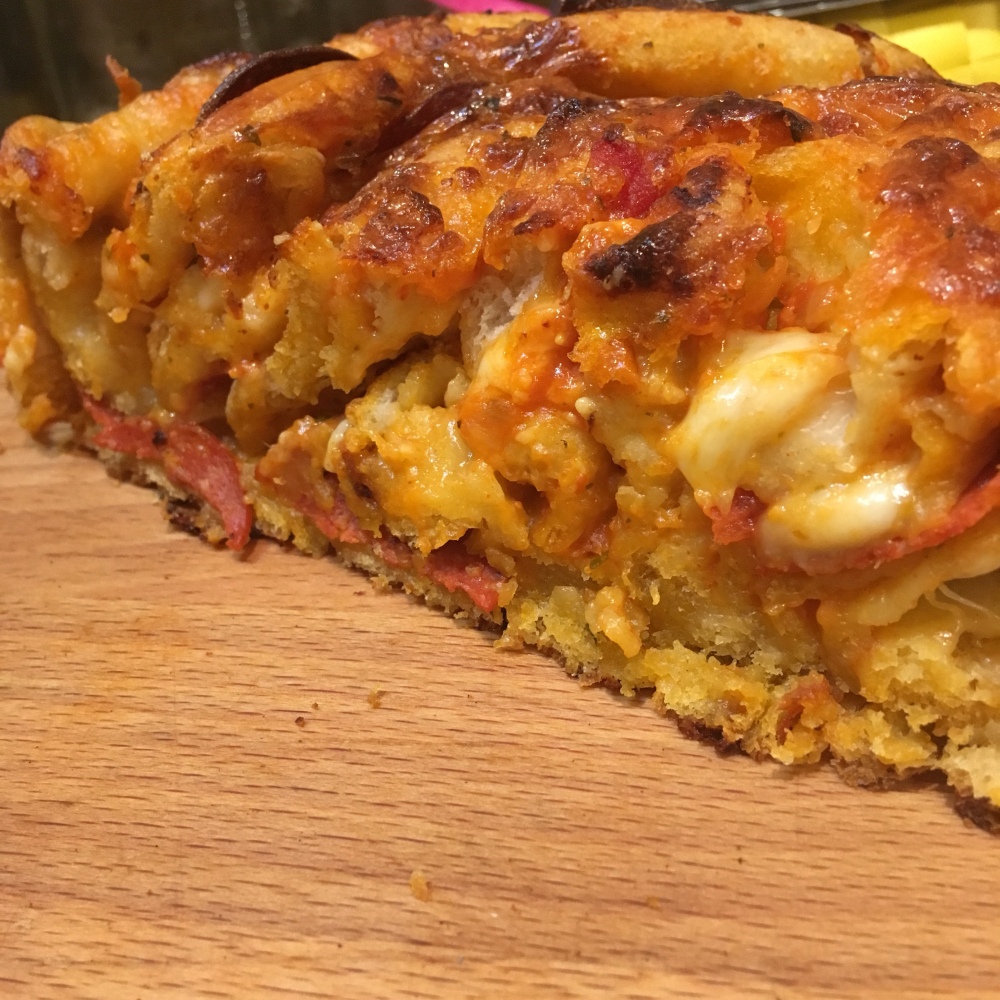