Erika decided when it was time to get up this morning. I’d woken up already, and removed my phone from under my cheek where it had apparently fallen after I fell asleep reading something last night! I don’t remember managing to read very much haha. I slept in as it had been another late night, and it’s always lovely watching her waking up next to me even if it does mean a late start to the day for me. She brought my glasses over to me and then decided the duvet was actually a much better idea and snuggled back down with me until she spotted Charley! The kids all snuggled up together for a while as I got myself together, but then the morning just too ages – I couldn’t focus on anything. Somehow I managed to get the fire dealt with and coffee made, by which time it was lunchtime (thanks SO much clock change) and as we had very little left in for lunches I’d promised to make fresh pølsehorn for the kids. And I did! Eventually. And they all had a bowl of cereal in the meantime 😂 Bonus for making them pølsehorn though is that I get a mini pizza out of it! 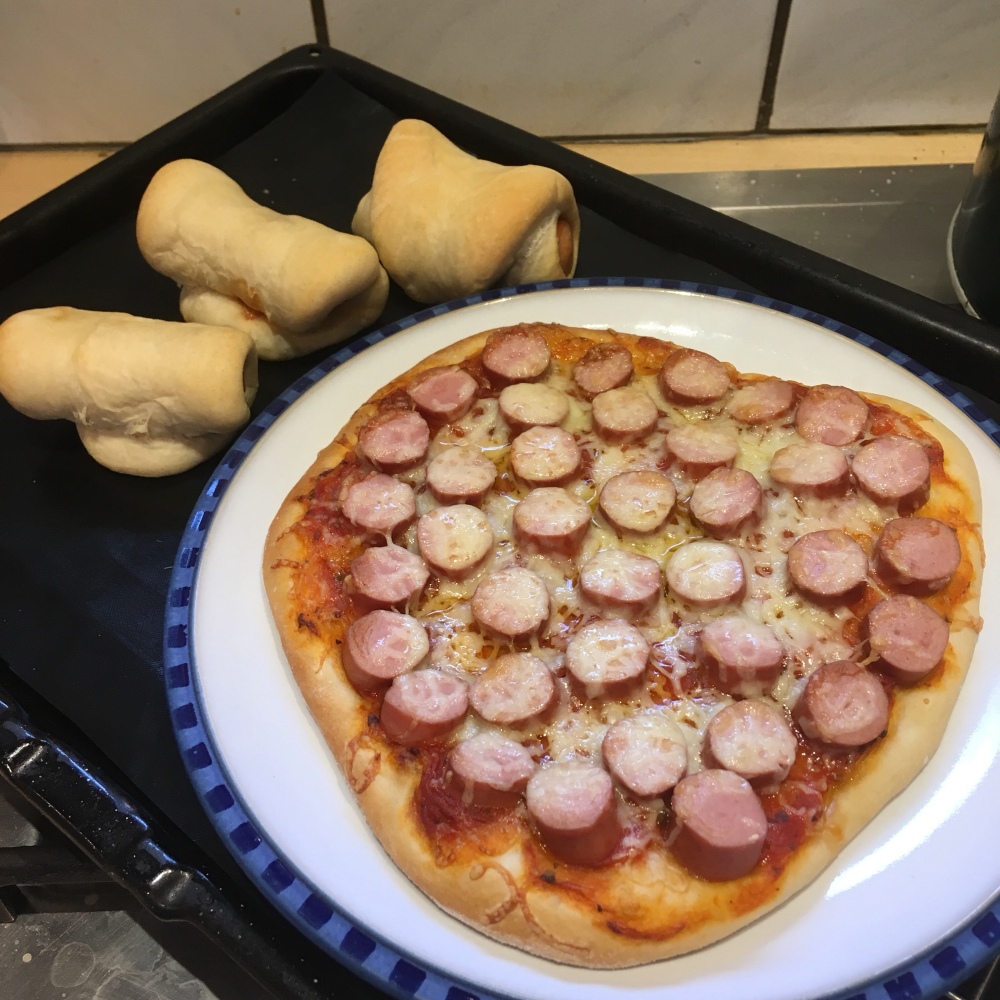 I did go outside briefly though. It actually felt like Spring today, a light freshness, damp but not freezy damp. Lots more crocuses starting to show their purple buds, and a lot of daffodils too. There are also a lot of other things that I really don’t know what they are from their first shoots appearing, so I’m looking forward to seeing what comes of them! If it’s not miserable weather tomorrow I’ll take some pictures to record this stage of their growth.

The boys did some drawing after lunch. Ben draws regularly now so he’s capable of holding a pen and most of the time his hands do as he tells them to. Charley though, he doesn’t draw so often mainly because living at the apartment was too stressful to allow him unsupervised access to pens and pencils, so it was severely restricted. He sat down to draw a flower, and a person, and they weren’t coming out the way he wanted them to, or he couldn’t figure out how to draw them, and he got really upset saying he couldn’t DO it, that he was rubbish at everything. I went and looked. I LOVE watching him draw. It amazes me every time. The kid has some decent drawing skills, he’s way more “advanced” if you want to call it that than Ben was at his age. It’s just that what he can see in his head and what he sees his hands producing – he can see the difference and it bothers him, whereas Ben sees what it’s meant to be when he draws things.

I think I’m going to try and buy him his own special pencil case now, with lots of good quality coloured pencils (he prefers pencils to felt tips as we discovered today) that he can use whenever he wants to, to try and start to undo the damage caused by restricting him. I’ve also suggested that in the mornings, before Erika wakes up, that that would be the best time to sit at the table where the light is lovely and just draw, or read. With no pressure. We’ll see. Maybe a pencil case present might encourage that idea a bit more.

No school tonight (spring break) so Steve had to do the grocery run on his way home. I was flitting between a tired Erika who didn’t want to go to sleep, and trying to get a load of laundry sorted to wash, and suddenly Steve’s bus went past and Erika’s head whipped around, and she clambered up to the window to wait for Dada. I was sorting laundry when he arrived so Ben helped her down do she could run across to the other window, and then he opened the door for her to go find Dada the groceries! Her squeals of joy again at having groceries to unpack always make me smile!

Another batch of pizza dough for tea, this time to make chocolate snails for the kids and mini comfort pizzas for Steve and me. Ben loved his. Charley pulled out the middles and ate only them, then came and begged for some of my pizza. Not sure whether Erika did more than lick the chocolate off. Think I need to try different chocolate filling for the chocolate snails, and definitely a sweeter and possibly chocolatey dough. Worth some experimenting there. Also worth taking everything out of the cupboards too, to find whatever hole we missed on Sunday because I am NOT happy about the shrews being back foraging in my kitchen bin again already!! 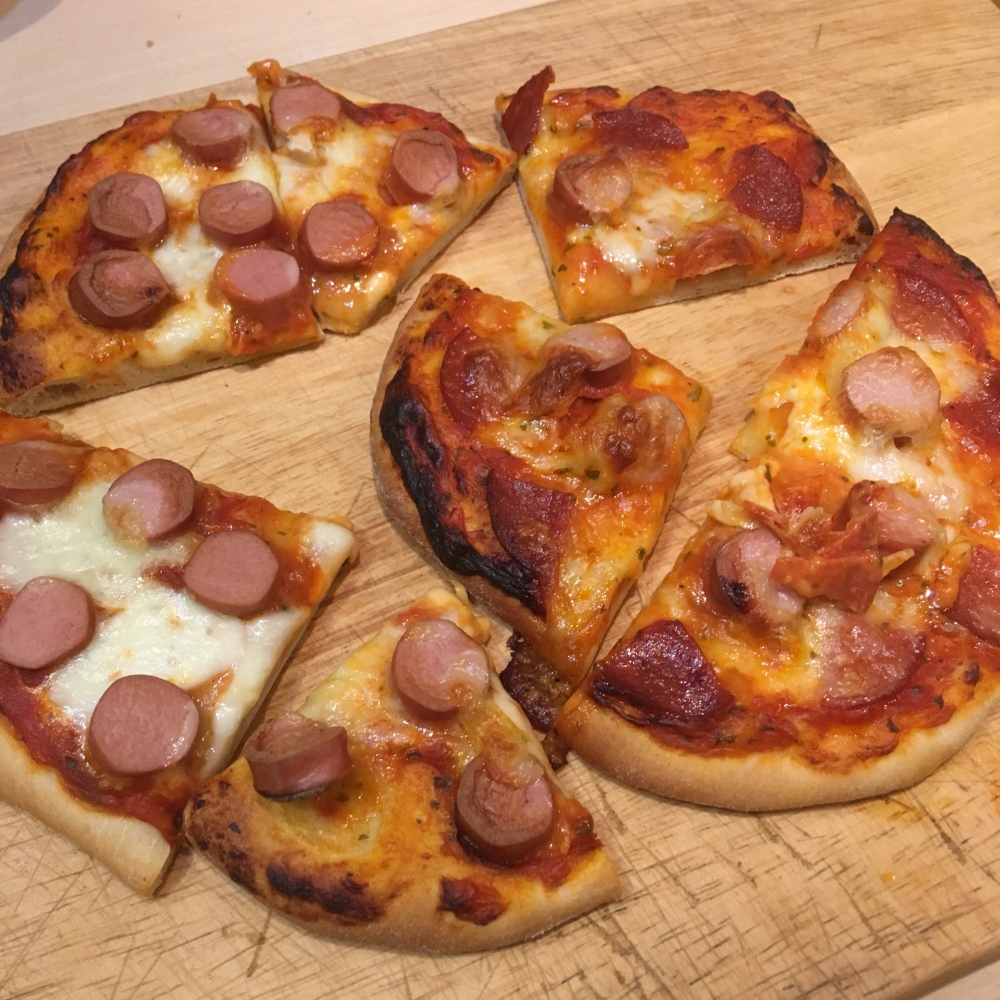 And then Minecraft. Ben has been desperate for me to connect up to him on Minecraft so we did our best to make it happen this evening. Trouble is, we had no idea what kind of game we wanted to play, Erika was clingy on account of not having napped, Charley wanted to be involved, and Ben was so giddy because we’d finally got to connect that he went a little off the rails and I ended up disconnecting in frustration. We did play a bit. But we decided afterwards that even though we got to play together, it wasn’t fun, and trying to play at that time of day was not such a good idea. We’ve promised to play together on Thursday during the day though. I’m looking forward to that.

Bedtime was frustrating too. Too much housework to get done, the two younger children staying out (as I said, they wake up later) with me needing extra bedtime snacks and then just as I thought we were good, Erika swung her arms around watching Charlie and Lola and her cup of water went flying off the table. It never stops does it. And then I could hear a shrew scrabbling at the detritus under the sofa. Wretched shrews. Go away already. But the kids all went to bed happily and gently and without fuss, and I was able to get the rest of the housework done and my i-Port changed in peace.

And then, there was a gentle meowing at the front door as I started to hang out laundry on the hall airer, so I shut the living room door, turned on the yard light, checked from the kitchen window to see which cat it was, and knelt down and opened the front door as gently as I could. I’ve never seen Smudge looking so friendly! She was a very curious cat. Still wary, but curious. It all looks so different in here to what it was before, I guess. We sat and communed for a while, then I got up and carried on with the laundry. She HAD to go investigate the kitchen and was desperate to investigate where I was standing but that was too much. And then she went and sat just the other side of the door in such companionable silence as I finished hanging out laundry with the front door open. When she popped outside briefly I took the opportunity to check the food bowls – of course, they were empty. She came back when she heard food rattling into the bowls but only took a mouthful, and then came back to watch me again. It’s pretty much made my day, that little bit of companionship has.