Despite everyone sleeping in this morning (much to Ben’s frustration, as he is very much like me not a morning person and likes the peace and quiet of being alone to watch youtube alone to wake up), by midday ish the fire was going happily, pancakes had been cooked and eaten, Erika had dragged me away to get her nappy changed, and the sourdough I made yesterday had been cooked to perfection.

I decided to take the small saw out by myself to see if, without the pressure of being watched, I could figure out a half decent sawing action to start cutting up the tree that Steve started to take out yesterday. I’ve not really sawn stuff up before so it’s another new skill for me to learn but if I can learn firelighting, how to split wood with an axe, and a new language all at the same time then why not keep adding skills. If I can learn to use a saw I can contribute more evenly towards the management of this place.

I learned very quickly that I need to check my angle before wasting a whole load of effort!! Three failed attempts later I finally got the right angle going and cut the branch. But I learned fast, and by the end of the day I was the one outside sawing the bigger trees into pieces while Steve dealt with the thinner ones that could fit under the chop saw. 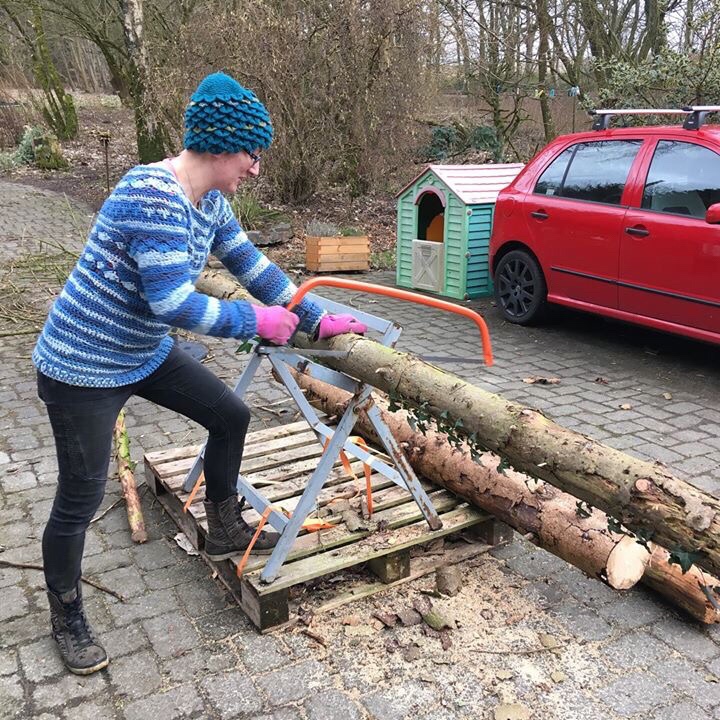 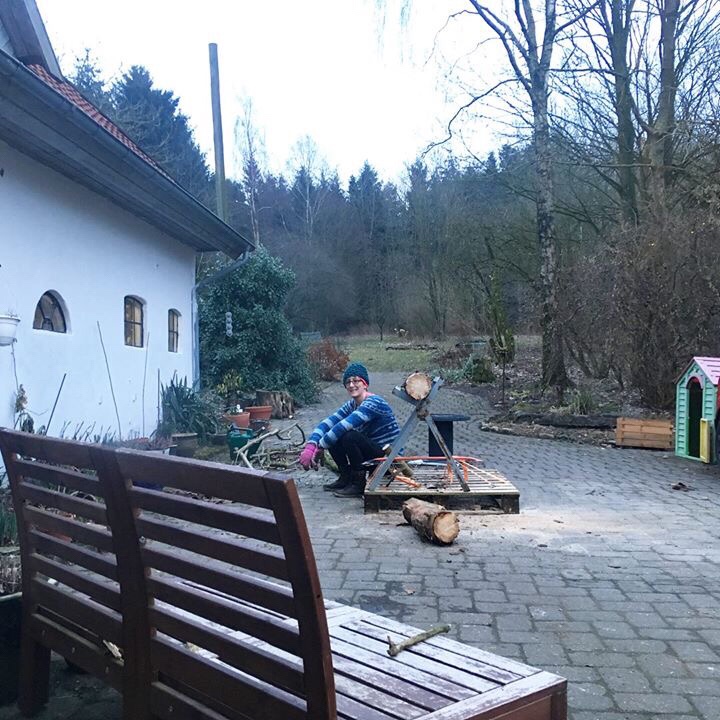 We spent several hours together out in the woodland, listening to a woodpecker, trimming dead fallen trees and pulling them in, and brought in more firewood than I thought we had, even though it felt like a lot of effort for not much reward. I guess the effort expended trying to get one particular tree down made it feel like that – this tree was leaning on another one and was threatening to bring the both of them down, but as it turns out they were both much tougher than they appeared! We still haven’t brought the leaning tree down, it’s snagged up at the top.

And I must remember to try to clean my boots up before next weekend!!

I love that the kids are seeing us both working like this though. It’s not just me in the kitchen and Steve in the yard / workshop. They see me carrying trees down to the yard, and sawing and chopping them up for firewood to keep us warm. They know that I’m unavailable for a while each morning while I get the fire set and lit. They see Steve cooking for them, and reading to them. They see (and help) me making dough for bread and pizza, and they go out and hunt for fallen trees and learn how to swing an axe and use a saw with Steve. The boys see us both caring for Erika, changing her nappies and getting her dressed. I’m looking forward to feeling comfortable enough in what I’m doing outside that Erika can come and just pootle around and be a part of things, that the boys can come and help out, and that we can all feel utterly ready for bed of an evening instead of just me and Steve!!

Another discovery I made today was where the cats appear to bed down. I’ve not really noticed it before, but there was a very obvious round indent in the hay in the barn when I went in there this morning – and when I started moving the greenwood in there to start to season I found Smudge all curled up in the indent! Apparently Tiger was in there later on as well, so that’s definitely where we’ll have to check for kittens in a couple of months. 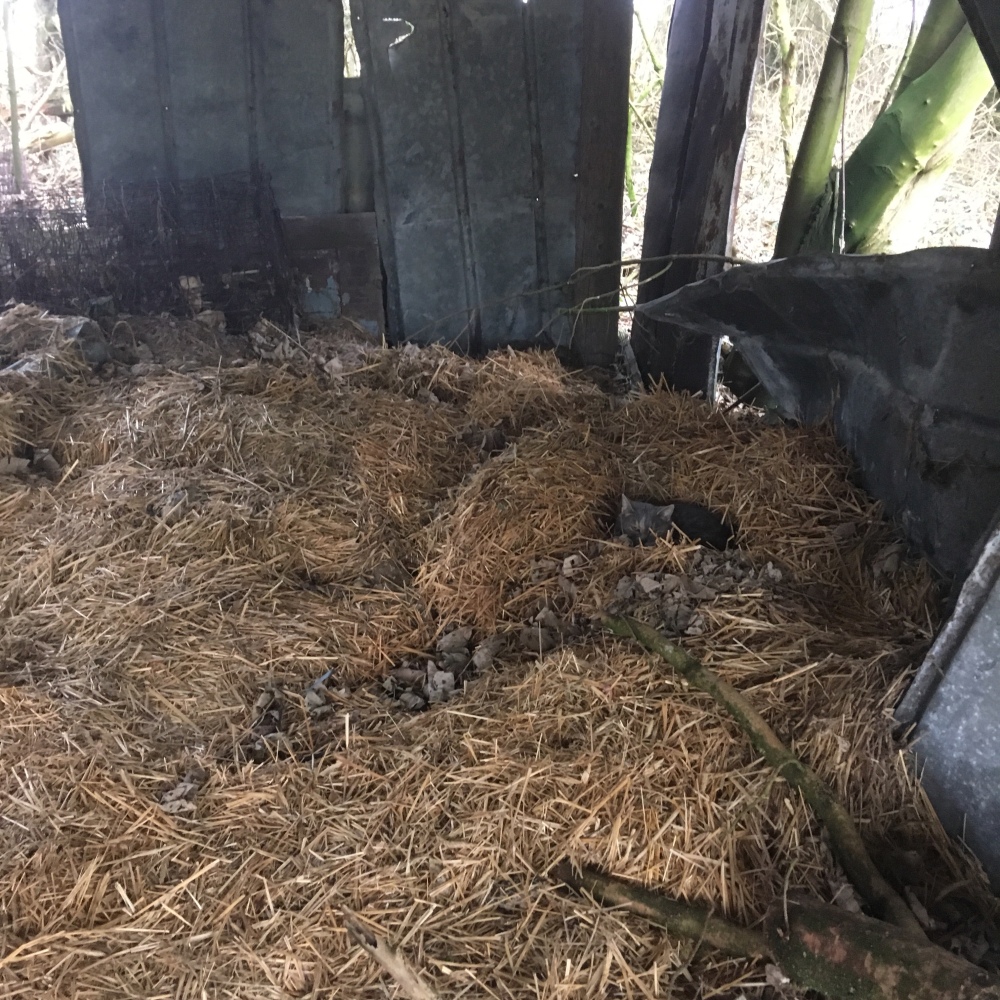 The grocery delivery arrived bang on 5pm and it made me chuckle that I was there still sawing wood out in the yard when it arrived, and it made me smile to realise I understood enough danish to recognise the “hard work!” comment and other bits of small talk. Worth getting groceries delivered once a fortnight just for the small talk!

And last but not least. Erika skipped her nap again today, but it meant that instead of going to bed at well after midnight she crashed out after a late tea just before 9pm. I’d managed to delay what I suspected may have been another Danger Nap by changing her nappy and getting her into pyjamas – worked as expected and she was hyperactive and bouncing all over again until she ate and that was it. Want sleep. Out. And she’s still asleep. Goodness knows how tonight is going to pan out but for now I’m happy. I had chance to do some yoga for the first time in well over a couple of months and my goodness is my body grateful for it after today’s efforts!