No briquettes were obliterated in the setting up of the fire this morning. AND it lit. Charcoal from yesterday plus a big half-burned piece of wood, couple of pieces of dry salvage, and a cardboard tray loaded with the smaller pieces of charcoal and some obliterated old timber and a firelighter.

Then I started to split some of the logs Steve had cut up yesterday. The first one split fine.

The second… not so fine.

Pre-coffee miscalculations: the knots were closer together than I reckoned and my axe got stuck (like it got as far in as I could whack it with the lumphammer) and I couldn’t budge it 😂💪🤦‍♀️ 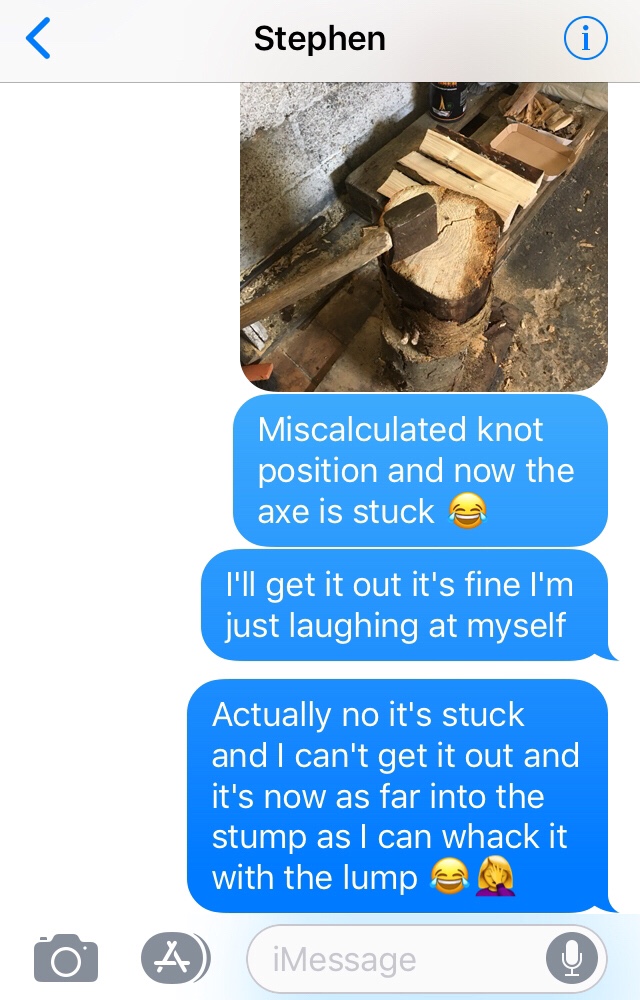 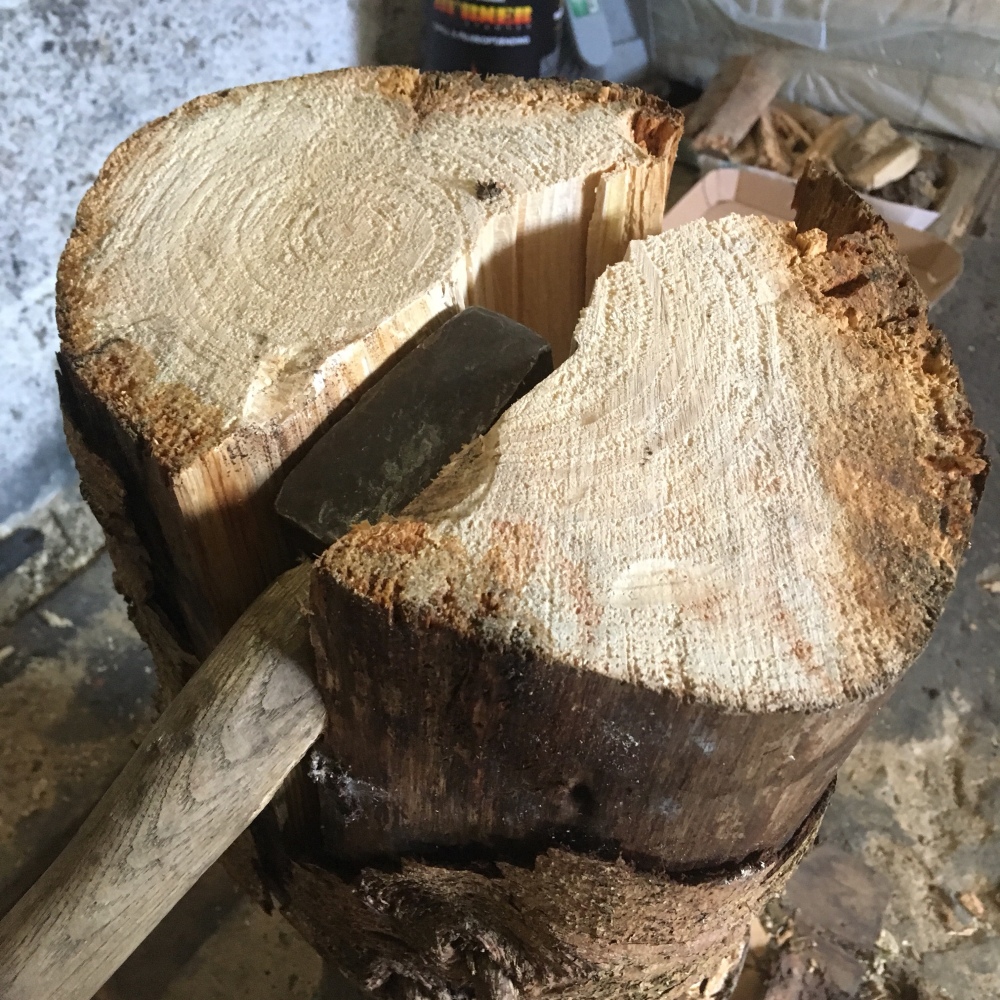 So I asked for a chisel. 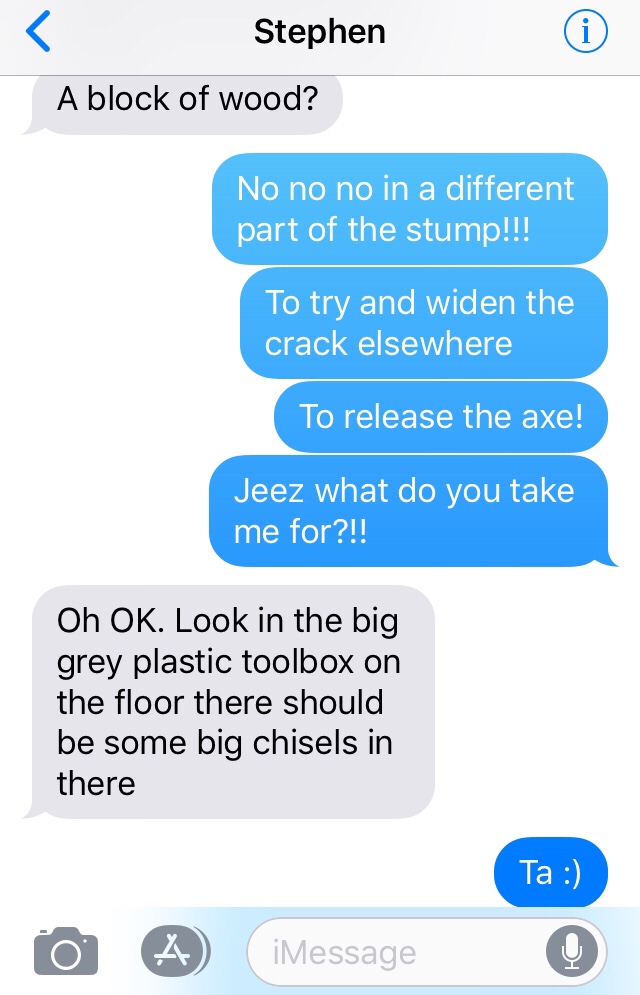 I almost got the chisel stuck a few times. That caused a bit of panic. And despite splitting up the log around the axe the sodding thing remained stuck. 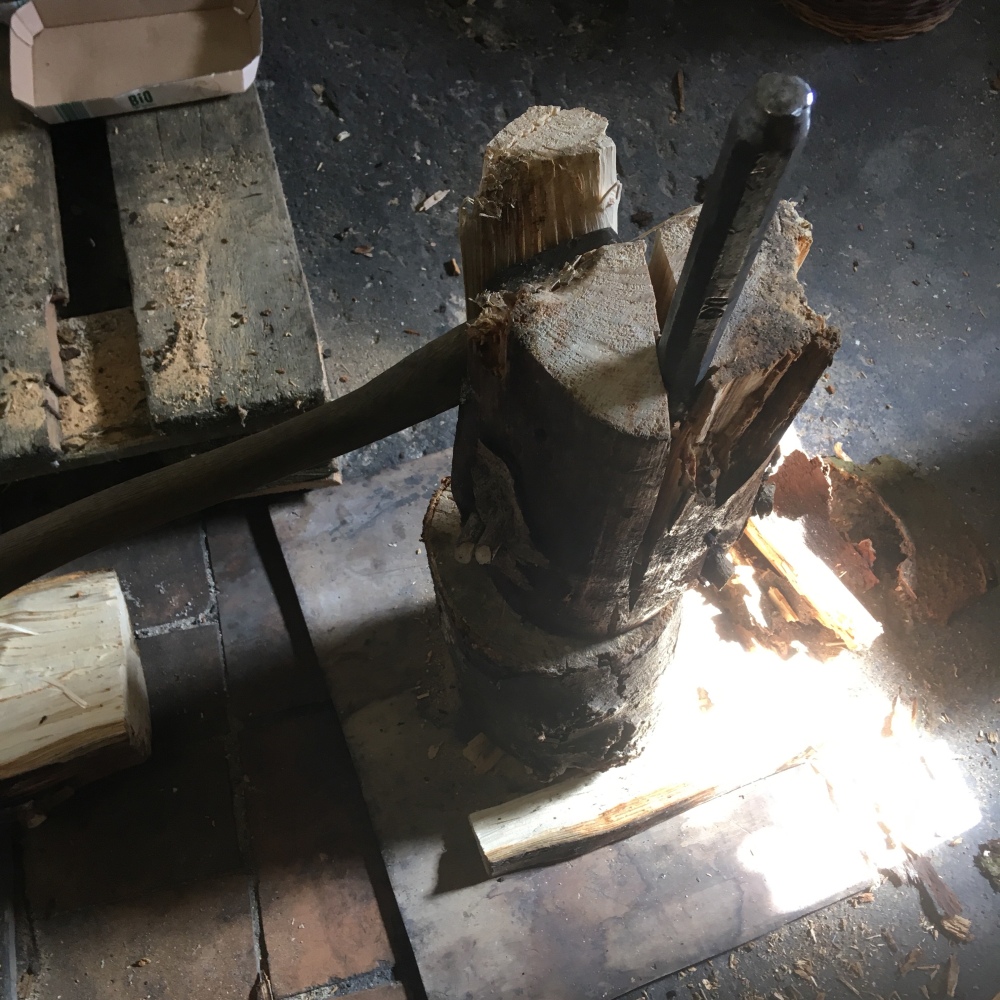 Until… well until I took an enforced break. Still wearing my hat. The kids sat on me to stop me escaping.

And while I was there being held captive by the kids (it was a very pleasant captivity I must say) Steve suggested whacking the chisel down the side of the axe – which I hadn’t yet tried, because I didn’t want to get told off for misusing his tools!

So I got the axe back eventually but not after finding a badass chisel to whack in to split the rest of the log up around it. At one point I despaired thinking I’d managed to basically create a giant mallet. BUT I WILL NOT BE DEFEATED BY A SODDING TREE. Oh no. I discovered persistence and perseverance are just new words to describe stubbornness and bloody-mindedness and they will suit me fine 😁 and if doing this every other day doesn’t get me fit again then I don’t know what will😂💪🤦‍♀️

And making dough, which I was also muttering at. Yay I’ll make mini pizzas for tea I thought, now I’ve cracked the pizza dough thing. So I added too much flour too quickly and made a leaden ball of dough that needed far too many attempts as rescuing by adding water and oil and resting it and blah blah blah but eventually after a few hours (in between splitting logs and feeding the kids and making the sourdough) I had a useable pizza dough. It was tougher than it should have been but it was mercifully alright and I only really need to work on my pizza sauce mixture! 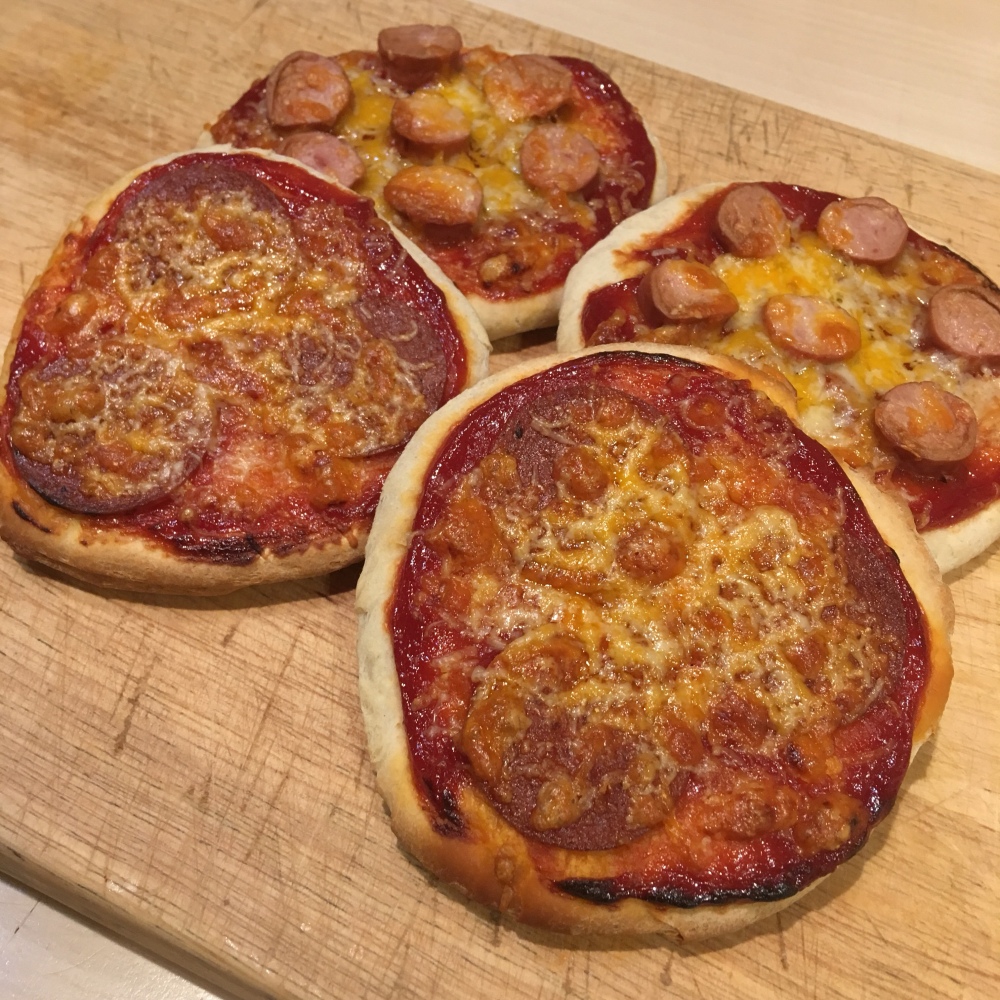 Thank goodness the sourdough was better behaved. Instincts actually still work on that one. It’s cold enough in the kitchen though to not need to put it in the fridge to rise slowly overnight – in theory it should be just about right on the side, and when I start warming the house up in the morning it can start to warm up a little too before it’s cooked.

Then I used up pretty much all the wood – all 7m of the tree that Steve cut up that we brought down to the yard on Sunday. So Steve went out hunting for fallen trees pretty much as soon as he got home (cycling, 11km mostly uphill) and dragged three back to the yard.

Re-wired an extension lead so he could plug his mitre saw in, and cut them up a little faster than by hand.

Meanwhile Erika was sitting in her play kitchen,

And the boys were being burritos.

It’s quite a luxury buying wood in already split. It’s knackering cutting it all up ourselves. Eventually we’ll have got on top of things and it’ll be a bit less subsistence living but wow my arms ache now.