Well, one tiny girl couldn’t sleep last night. She roused, struggled, cried (I won’t lie, I nearly cried too), and eventually took herself off into the living room. I leave it tidyish overnight, and safe, so there was no need for me to worry really about what she might do. I listened. Didn’t need to wait long: she came padding back into the bedroom, “here tis! here tis!” She’d found her Bunny. Sometimes when she’s struggling to drop off in the evening she’ll go and find Bunny to cuddle to help. She went off a second time too and I think she forgot she’d already found Bunny because when she came back in she climbed up on to the bed and exclaimed “oh! Here tis!” and snuggled up and pulled the duvet over us both and eventually fell asleep again. Gone 4am. Charley also had a broken night, waking and muttering to himself as he turned his nightlights on which he’d decided to leave off at bedtime. At least he fell asleep again quickly though.

Sourdough and fire duties this morning. With Erika firmly attached to me for a long time past when my alarm went off, the boys sorted themselves out with food. I did a tiny bit of reading up on sourdough, why so many recipes add extra yeast or other raising agents in (to save on time, mainly, or in case the culture isn’t lively or stable enough), how to judge the quantities of ingredients required etc and instead of throwing away the discard from today’s feeding I’ve made my first batch of dough for a sourdough sandwich loaf. I did add a quarter block of fresh yeast into it too as it’s a very very new starter culture, so I’m not sure quite how stable it is yet. But it rose! Pictures of the Rising of the Dough at the end.

It’s above freezing for the first time in a couple of weeks, the mosquitoes are dancing (how are they even still alive?!), the cats are yowling at night and scent-marking EVERYthing, and I decided it’s a good day for a skirt. 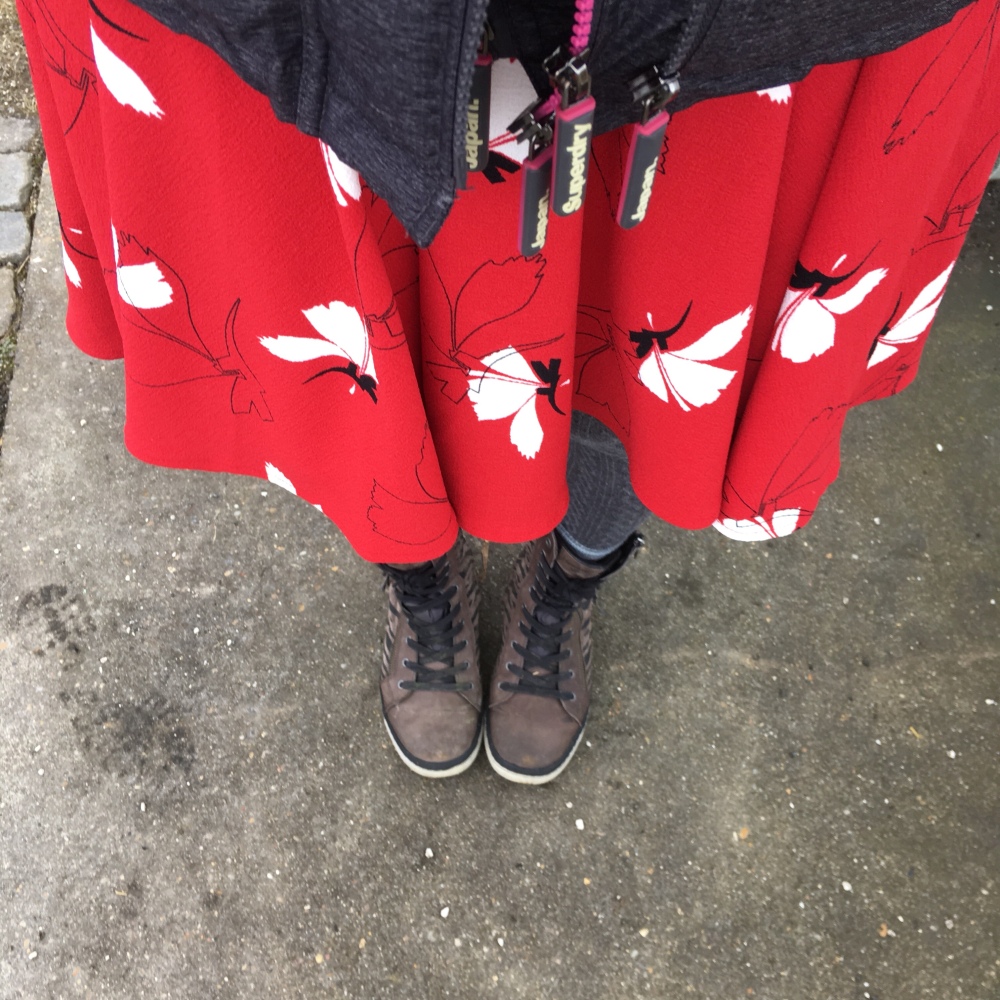 Been watching the cats a lot lately. Hard not to. They’re suddenly both very vocal. I wondered if they were missing their previous humans. Then I watched them some more and they were both displaying the same particular behaviours – it didn’t take much searching to come to a very plausible reason: they’re both female, and they are BOTH in heat. This freaks me out somewhat. At least if they do somehow get themselves pregnant now, it won’t be freezing cold when they have their litters. And I suppose extra barn cats could come in handy in the future. Maybe we could even house-train one or two to see if they can hunt down the mice…

I have done a bit miserably at looking after the fire today. Kept forgetting about it, only remembering when it was down to embers rather than keeping it hot and heating up the boiler water, but I don’t know what kept distracting me. Watching the cats, probably! It was time for school all of a sudden, high-five in the drive (well, in the hall) as Steve got home and I dashed out, and Erika was happy to give me a hug ‘bye (and shut the door after me) as I ran off without shopping bags or a crochet project for afterwards. Pretty warm today, 6C, and not very windy. Warm enough for a skirt and tights! Haha. Warm enough that by the time I was nearly at school, walking up from the train station, I had to remove my jacket. Still cool enough to keep my jacket on in the train station waiting room at the end of the day while I waited for my bus.

Today’s school lessons were hard work, more pressure than we normally get, and with a different teacher. The regular monday teacher was still off sick, so we had another supply teacher. No english (or russian or ukrainian or german) allowed today though, only danish! That in itself is/was no bad thing, it’s good to be challenged like that when you’re learning a new language, and to be honest there are students in our class who don’t speak english either so it’s unfair on them to “cheat” and use english. I felt like I was back at school though, and not in a good way, if I’m honest, with the particular style of teaching. Still, by the end of today’s lessons we realised we knew more than we thought we did, even if the style of teaching suited some more than others. I’m grateful for the opportunity to learn, but I think it would be difficult for me to carry on with lessons if this was our regular teacher.

Little Miss No-Nap (typical, going on a nap strike again on a Monday!) was very ready for me to come home. She’d powered through, and collapsed when I got in so I only had time for a quick snuggle with the boys before taking Erika, who fell asleep almost immediately. And then I realised she still had her jumper on! By some miracle I managed to get her out of her jumper without waking her, but then had to wait to put her to bed anyway as the boys were still being read to; so while I waited to transfer her I cleared up the kitchen and cooked the sourdough loaf. It can sit overnight now it’s all cooked, all wrapped up in a cloth. Sleeping 6yo removed from my bed (after dismantling the den he’d made with his duvet on his bed) and tucked up on his own bed, sleeping 2yo transferred from the sofa to her own bed, and I can sit down and relax for a bit now and STILL be in bed before 1am!! MARvellous!

The Rising Of The Dough 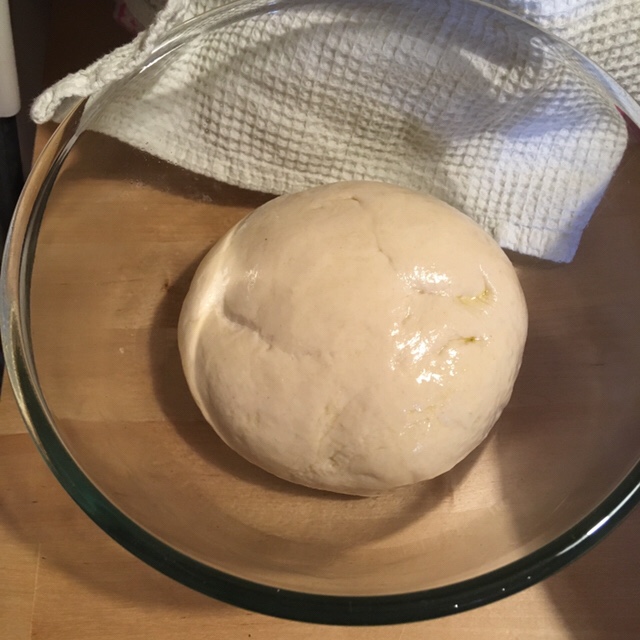 Two and a half hours in

Folded into a tin, and into the fridge it goes with the aim of cooking it once I get home from school

Out of the fridge, it’s proved seven hours now

Slashed the top, and into the oven it goes as the oven is warming up 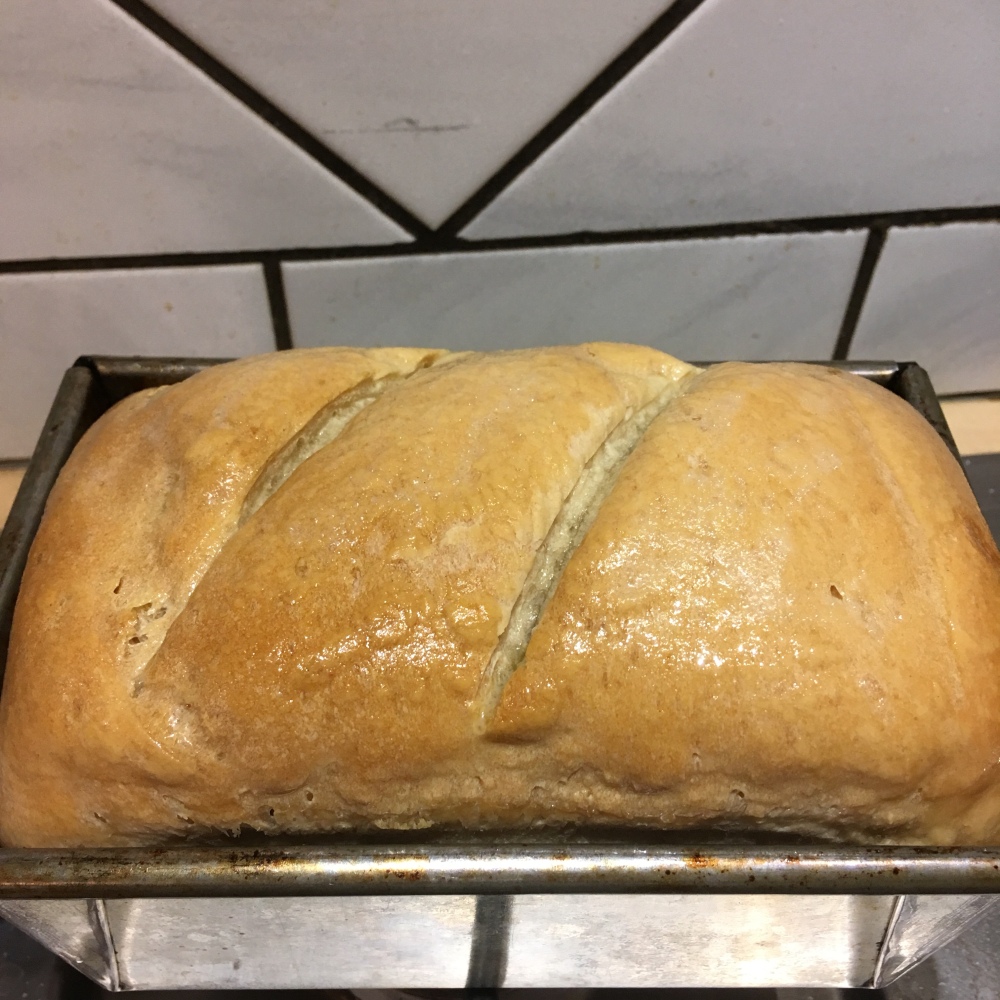 All wrapped up and smelling lovely