I love my husband. And Saturdays are starting to find their own rhythm at last. I lay in until Erika got up and fetched me my glasses. It may have only been an hour lie in but it was lovely! Steve had done the fire, made coffee, and cooked the pancakes. I can’t be bothered with eating pancakes (too fiddly to dose for) so I grabbed a coffee and a brioche stuffed with butter and port salut for my breakfast before heading out to catch the bus to do the usual saturday morning what did we forget to put on the list yesterday grocery run. And to try and get a new 6.5mm crochet hook because I’ve lost mine and it’s the one hook I want right now! Can’t even remember the last time I did any aran projects either, so I’ve no idea where it is.

Shopping done, didn’t have the hook size I wanted (gahhh) and back to the busstop with a whole two minutes to spare. Hey ho. Hope my hook turns up.

Home – and I got the welcome home treatment! There she was in the window waiting for me yelling her head off, running to the back window to shout hiya some more, and trying to let me into the house but of course after yelling IT’S A MAMAAA she saw the shopping bags and everything she pulled out was met with yet more squeals of excitement. Including the loo roll because that’s proper exciting isn’t it.

Afternoon spent crocheting while Erika and Charley played with duplo and watched some new show on Netflix which is managing to engage Charley with maths, and Ben and Steve play upstairs with the lego until it’s rugby time…

And Erika had what appeared to be a micronap just after having her nappy changed. Eventually I gave up and went out for a walk into our woodland. I’ve not had chance to really explore it yet, I’ve either had an Erika to keep up with or have been told “don’t stay out too long” because Erika or it’s been almost dark by the time I’ve evaded everyone and made it out. I made it along two edges.

Could’ve stayed listening to the brook for a long long time. Followed it up the right hand side, until suddenly the woodland looks cared for. Walked along the boundary between the chaos and the managed, to find the corner of the field that points into the woodland, marking where our part of the woodland ends. 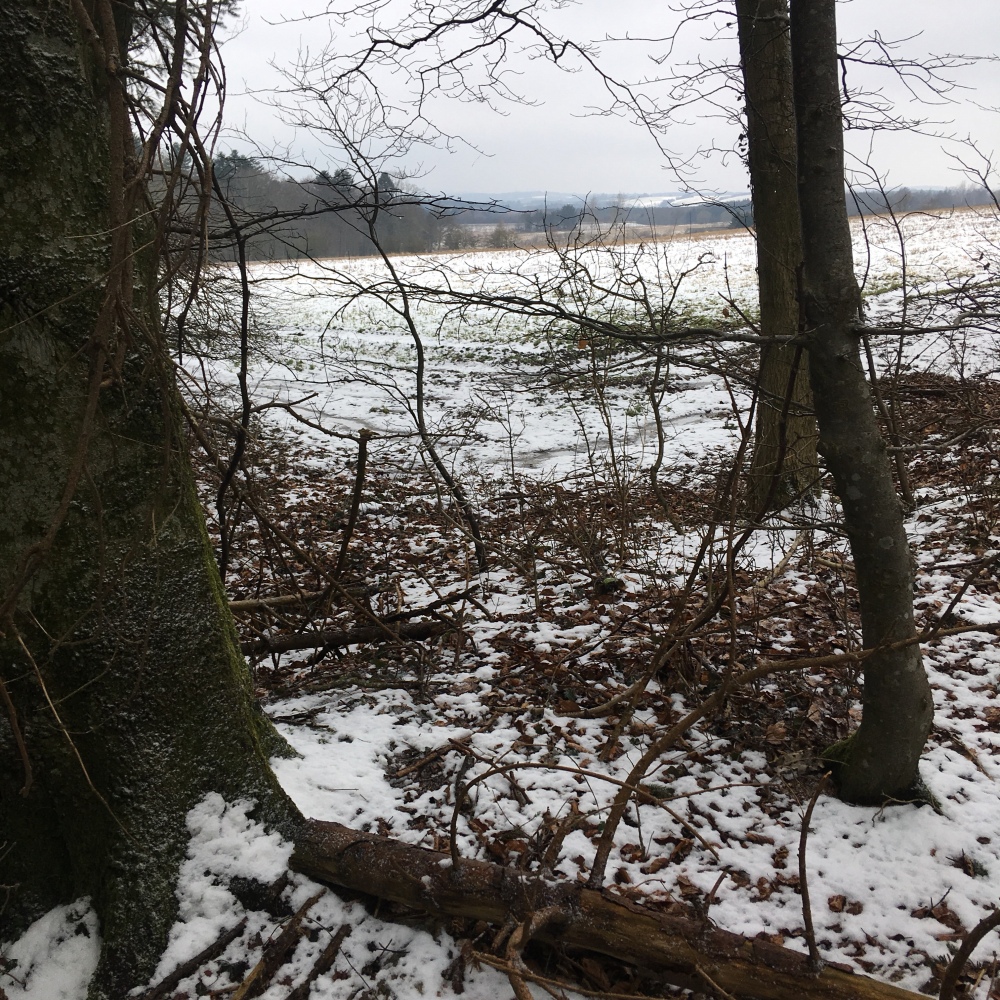 Our poor trees. It’s just chaos. We can’t even really get in to start sorting things out. Right now it looks to me like it’s going to take a good few years just to try and work our way through clearing the fallen trees (of which there are dozens) and the scrub that’s grown up and entangled everything.

There’s piles of sawn logs dotted around everywhere too, that never made it down into storage, just rotting away on the woodland floor. Possibly some of them might not be rotten and can be brought in to dry out.

I’m longing to get out there to start trying to thin out the undergrowth so the woodland can breathe again, but when? When could I do that, realistically? Weekends? But that’s when Steve is home and he’s more likely to get out than I am. During the week? I need to be close to my children if they need help with anything, and to keep the fire going. It’d be easy to lose an entire morning or afternoon out in the woodland, only coming back to find something to eat.

I’m glad I went out exploring though even if my heart is a little broken now for that woodland. Seems to be a recurring theme in our lives, this one of finding something / somewhere that has been neglected and broken over the years, and breathing love and life into it again.

I did not want to return to reality. But, toes were freezing and my phone had run out of battery so back to the house I went. And noticed deer tracks, on the garden path just opposite the patio! There were at least three different sets of hoof tracks too. 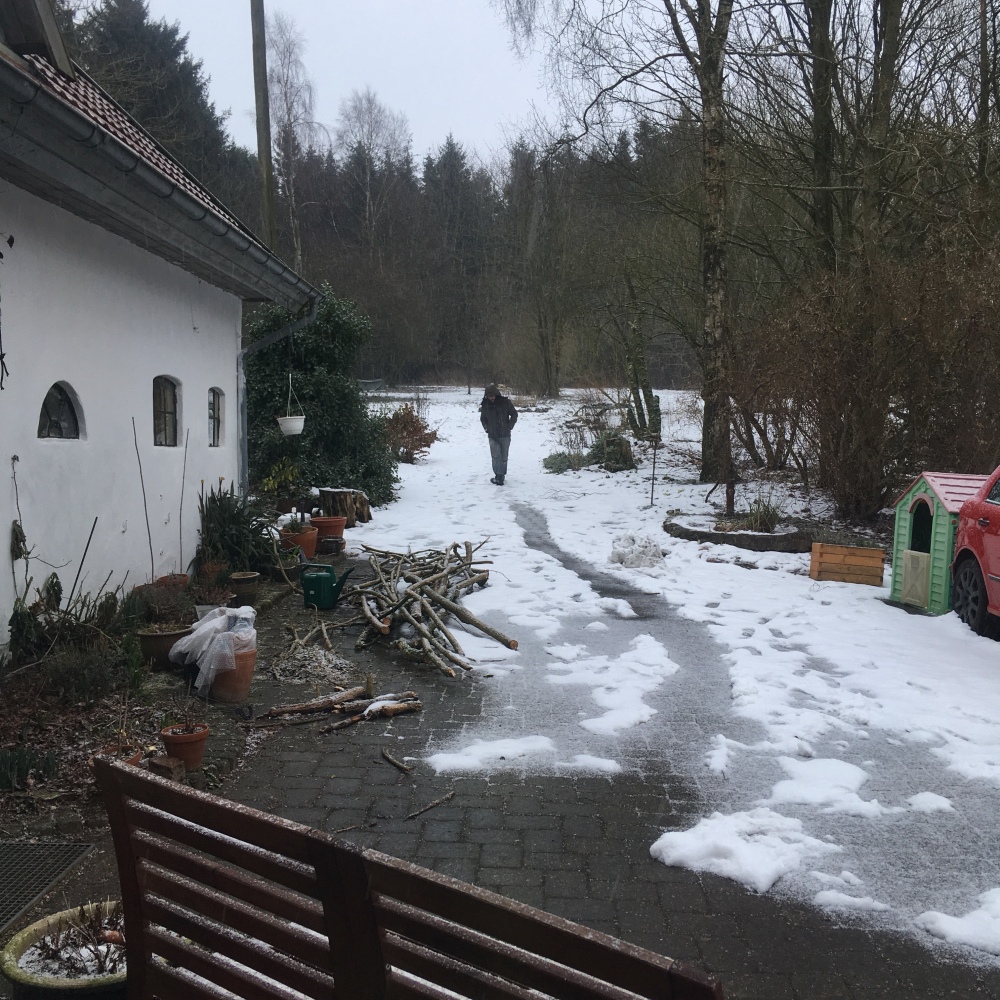 Erika ended up having a meltdown when I got back inside because she was so tired (it’s not like we haven’t been trying to help her go to sleep though, you know?!) and then promptly fell fast asleep on me so at least she’s having a nap today!

Felt cold this evening. It’s started snowing again and the temperature has barely reached 0C all day. Sitting watching tv does not agree with me even when I’m snuggled up to Steve, I always feel so lethargic afterwards, no motivation to get anything done. Thankfully Ben requested porridge for tea/supper – even easier than beans on toast, and at least it’s warming.

Sensory overwhelm came and tried to slap me down this evening. Just could not cope. I guess that’s the only problem with spending time just wandering the woodland – at some point you have to come back to reality. So much noise indoors this evening, and Erika although she woke up from her nap in a hungry but good mood, was super-clingy and eventually Steve told me to barricade myself in the bedroom with earbuds plugged in.

Thank you Foo Fighters for being the PERFECT music for when I’m in sensory overload and need to block everything else out.

And thank you Steve for getting on with things and making sure we got fed too.

Bedtime could have gone badly but, as I learn time and time again, when I reach the end of my own patience and grace and admit that I’m struggling, God steps in and pulls the bridges back up. The kids came and hugged me tightly after I apologised for shouting at bedtime and for having such a bad day and for basically spending most of the day avoiding them so I would snap at them less.

Steve came and sat with Erika after the boys were asleep so I could put a new i-Port on and get the kitchen straight; and Erika was happy to voluntarily come and lie down to get her nappy changed, and snuggle up and go to sleep not long after he’d gone off to bed. She’s changing again. Yesterday she also came and lay down on the changing mat voluntarily, and came and climbed up to sit on my lap to get her toenails sorted out, also voluntarily and without any fussing at all. I like this stage. One to enjoy while it lasts I think!

‘Course I stayed up a bit to finish her jumper. (Even with that dratted mouse scampering around in the walls here there and everywhere.) With only half a sleeve to go I was hardly going to leave it until tomorrow! 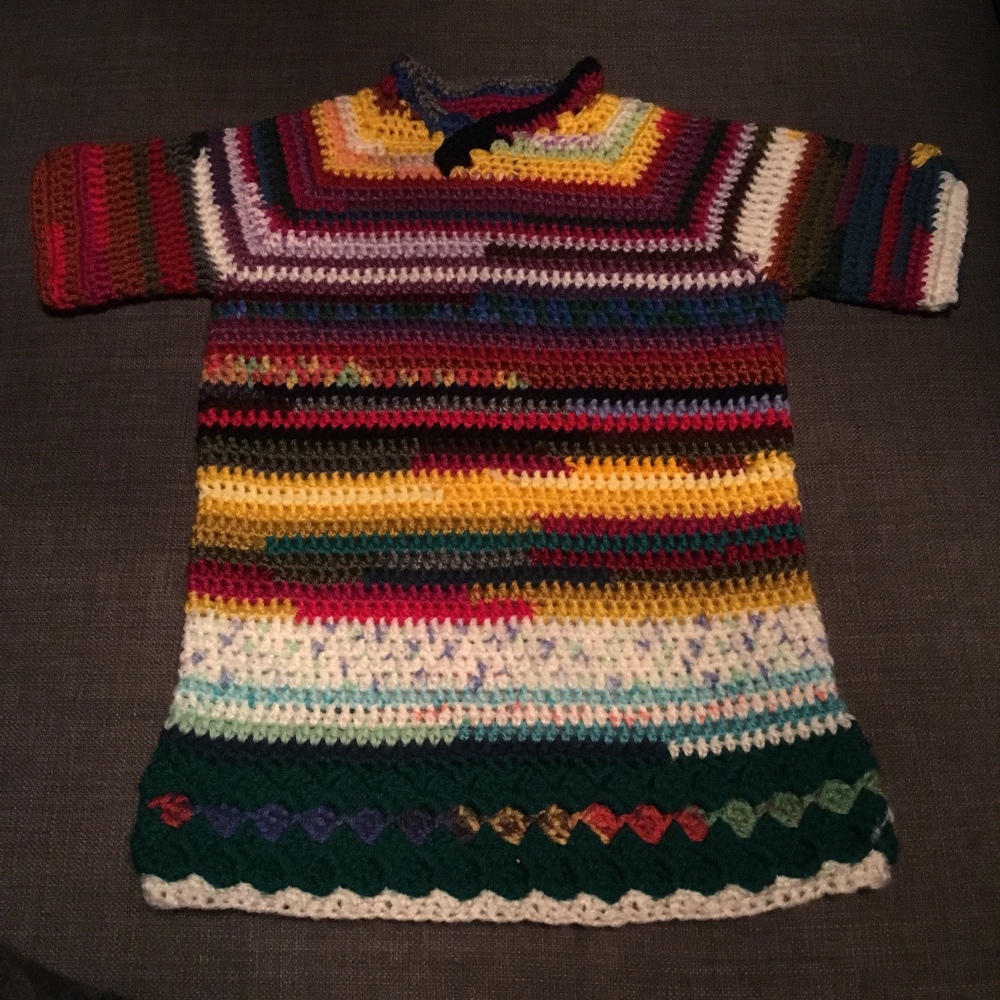 Some of the responses to my question “If you were a 6.5mm hook that wasn’t in use in any projects and wasn’t in your hook case either, where would you hide?!”

– down the side of the sofa

– under the coffee table

– have you looked behind the fridge? If you lose something it’s nearly always there”

– my kids put things in the bin. Never rubbish, mind

– I had this last night with my brand new 1.5mm hook, turns out my youngest had shoved it down the back of the radiator

– with my tape measure! Had to buy a new one, still mia

– I was searching all over for my tape measure. I gave up for a while, then went back to my knitting bag and searched for the fourth time and found it!! How is that possible?

– in the spaghetti jar

– I once lost my keys for two weeks, only to find them in the slow cooker!

– Possibly having a party with 2 4mm’s and a 6mm? 2 Of which are part of a set and it’s killing me not knowing where they are. They’re not even down the crevices of the sofa which is where they usually go to hide

– Probably in my toddlers collection of mummy’s things, or her mouth

– Inside the sofa, in the cutlery drawer, or the kids wardrobe? That’s where mine hide most of the time lol