Today we had a visit from the area’s home education supervisor. He’s the area’s main education overseer, so he oversees the schools as well. There’s some new laws come into place recently with regards how home education supervision is supposed to work, which is refreshing in its transparency to be honest. Far from making it more difficult for home educators, it means that you know what’s expected of you in terms of providing an education, and you know that the person liaising with you knows what the law says and therefore isn’t likely to overstep their jurisdiction, unlike a lot of accounts I hear of from Britain. Anyway I have a month to look at the guidelines that he left with me, before a more formal tick-box meeting that will cover all the areas he is required to oversee.

The most encouraging thing is that rather than testing the children to see if they are keeping up with their schooled counterparts, any testing that may (or may not) be done is so I can get an idea of where they are in relation to their peers. Not so I am forced to push them to catch up. But any testing might also show up SEN areas where the kids may struggling, in which case the state can offer assistance if needed. So, it actually feels like positive input. It’s just so very very hard to shake off the LA intrusive mindset that comes from home education in Britain, and hard to shake off my suspicion of education authority!

Anyway – in order for today to function, Steve got up super early and set the fire going on a slow burn so the house was already warming up when the kids and I got up. Everyone was dressed and fed before the home ed chap arrived and that’s no mean feat.

Got to 11am and he’d gone and we were all twiddling our thumbs a little!! So I found some Sarah and Duck colouring pages that a lovely friend had sent us from England, and all the children came and sat at the table and coloured in and drew and scribbled. 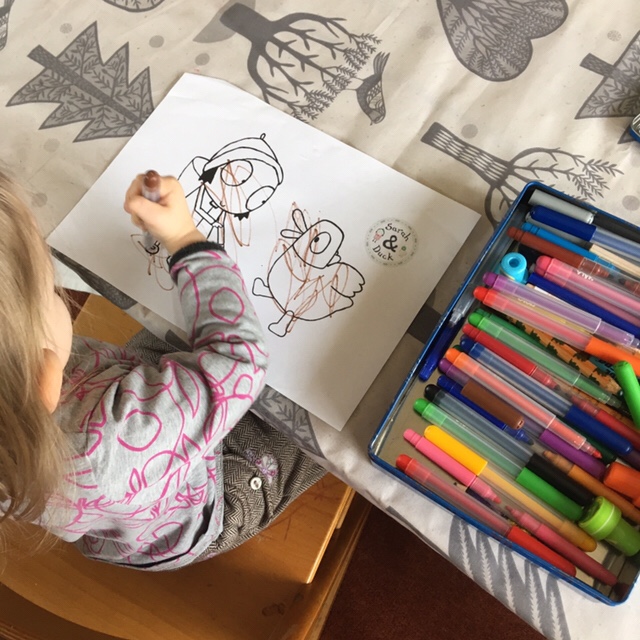 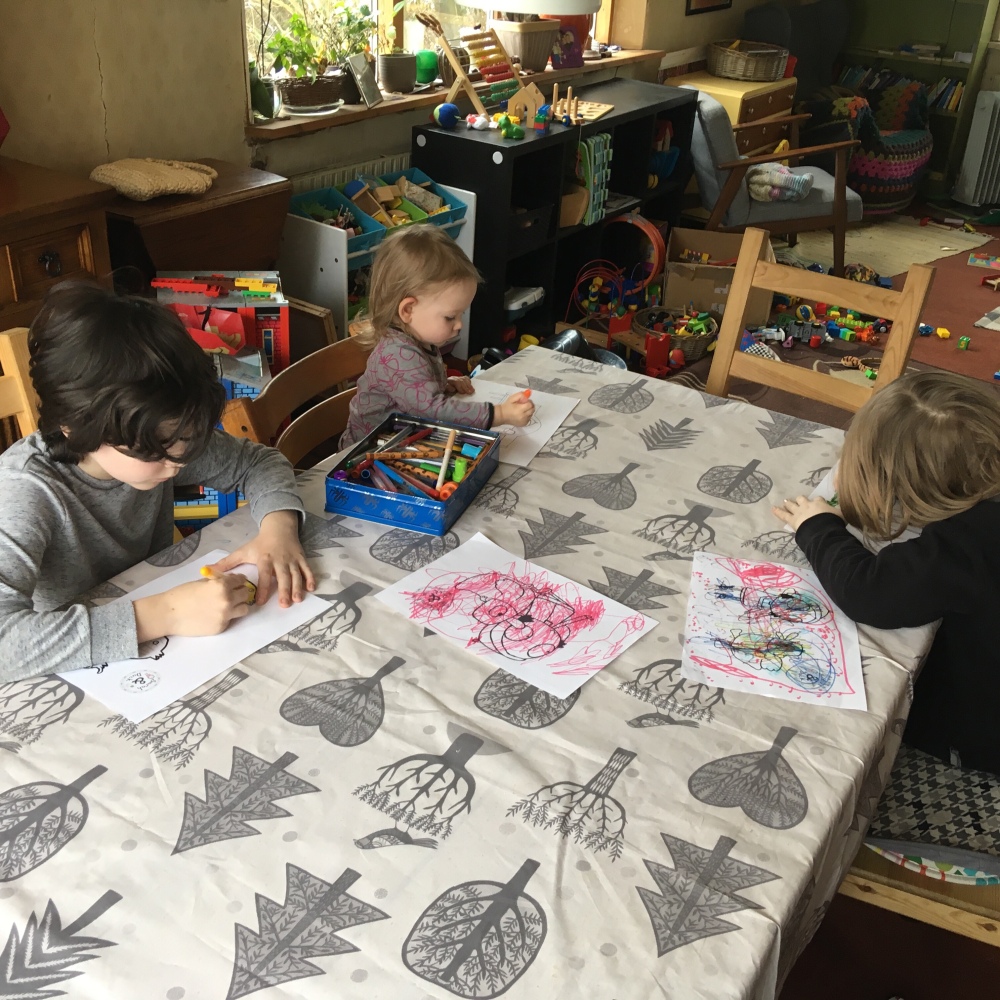 They watched some tv, the boys brought some lego down and played with that, I took the winter / christmas display down and set up a fresh one for spring / easter, cutting some twisty hazel from the tree by the pump to hang little egg decorations from. 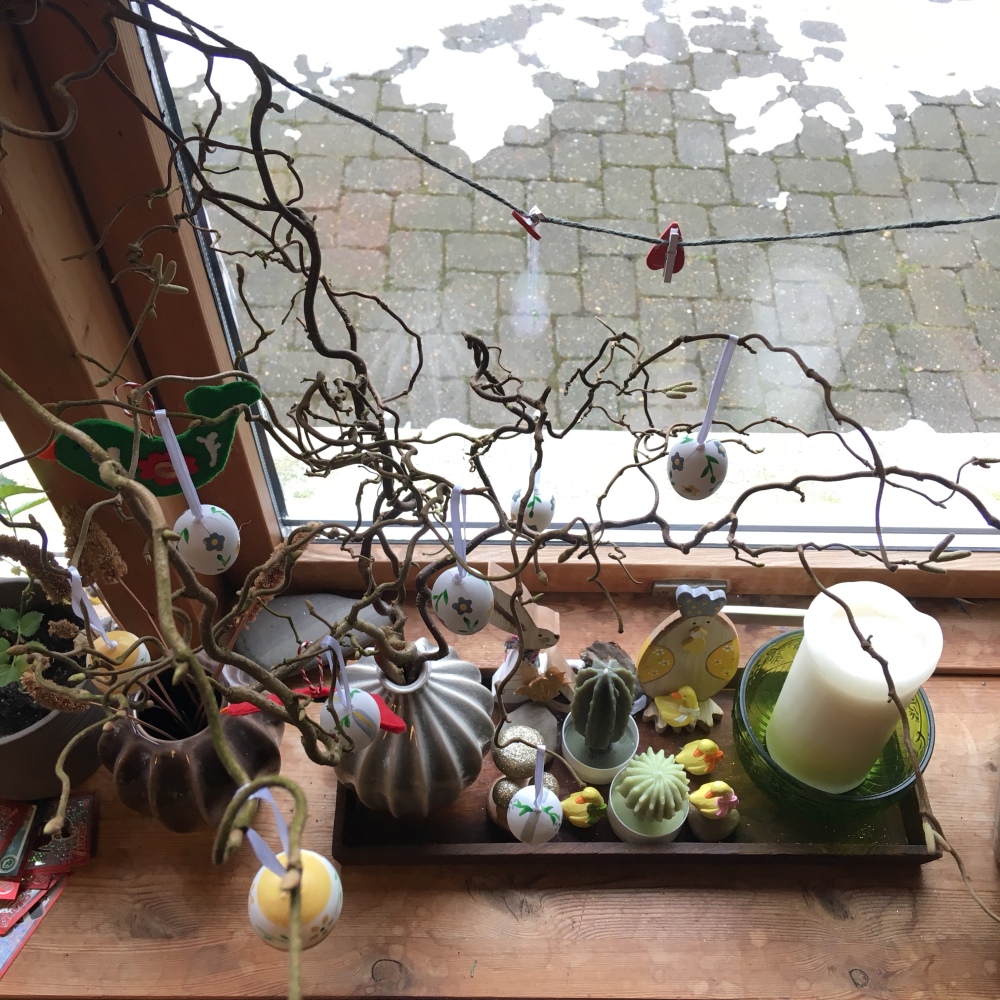 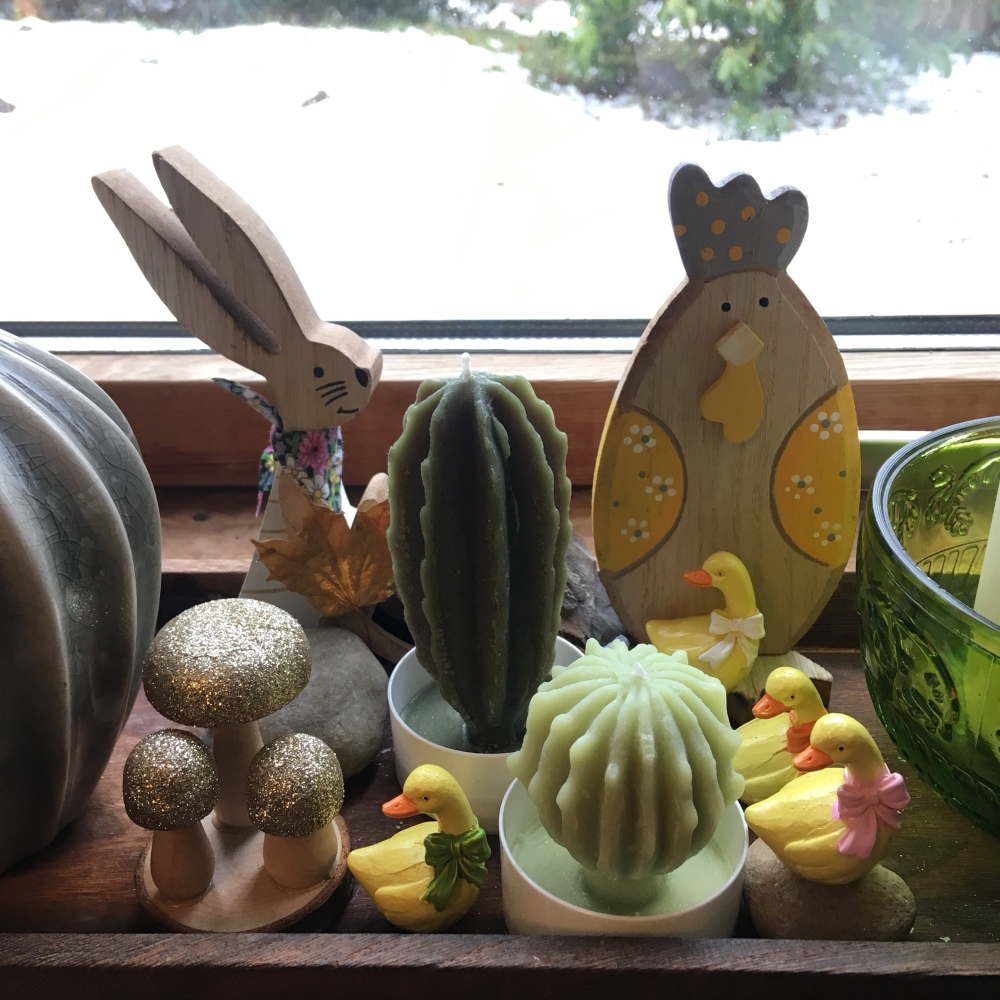 I went outside to cut the hazel and spent a pleasant few minutes following the cat tracks to see if I could figure out where they went, but apart from heading into the sheds around the back I couldn’t tell beyond that as there was no snow to follow their pawprints in! I had a quick look at a fresh molehill to see if I could tell whether the mole had actually touched the snow or just gone back underground, but as far as I could see there are only bird prints around the molehill. 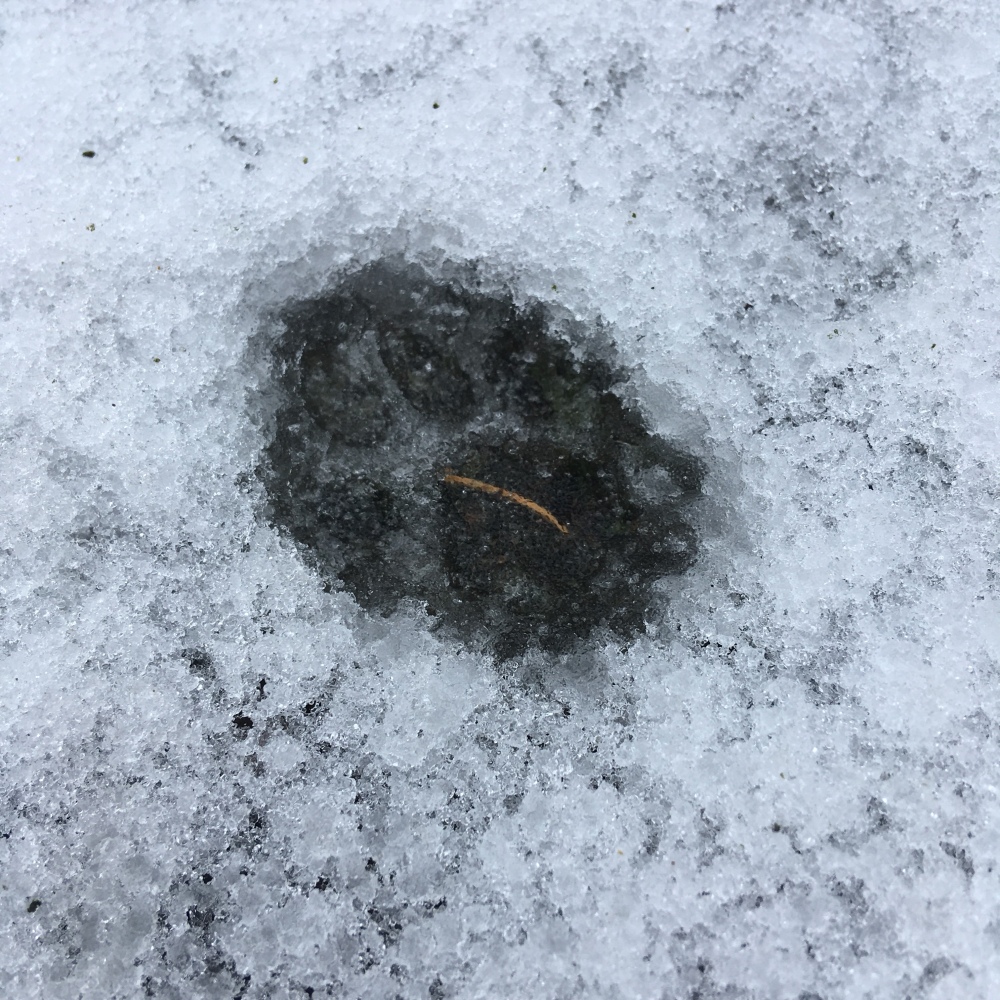 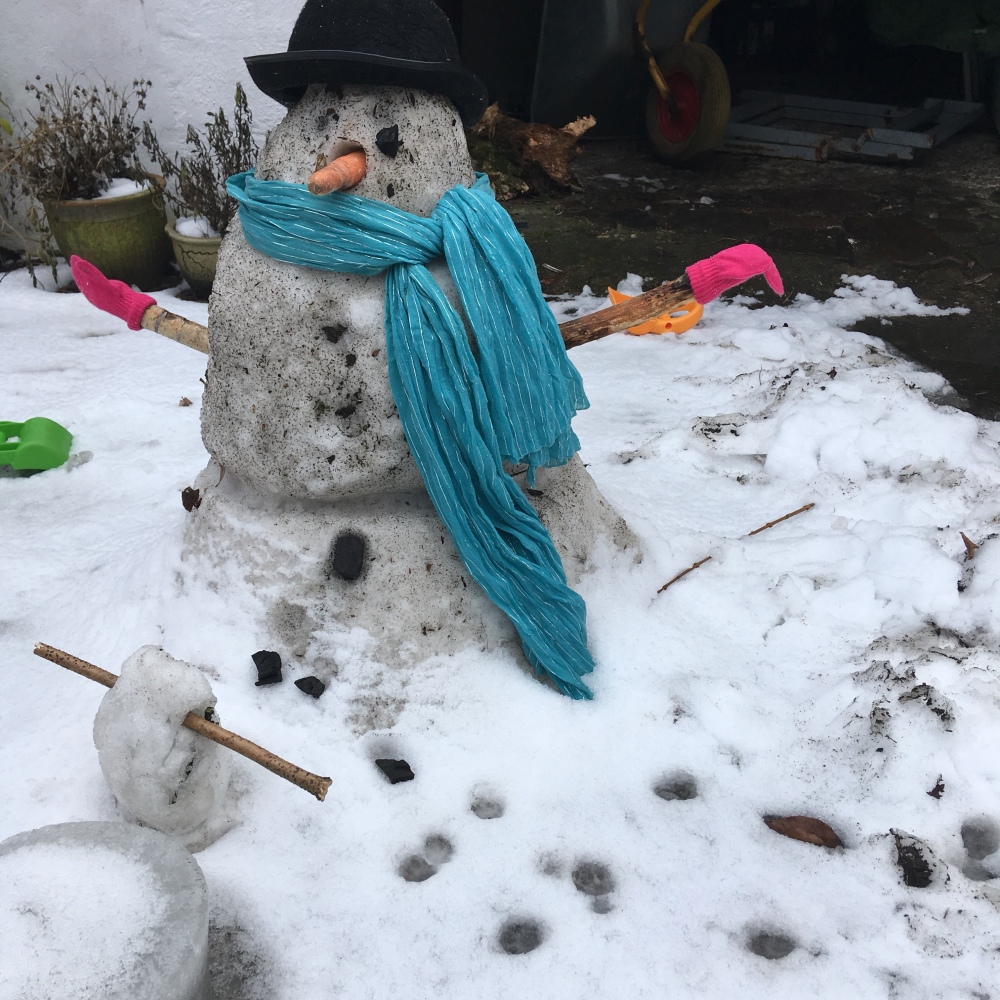 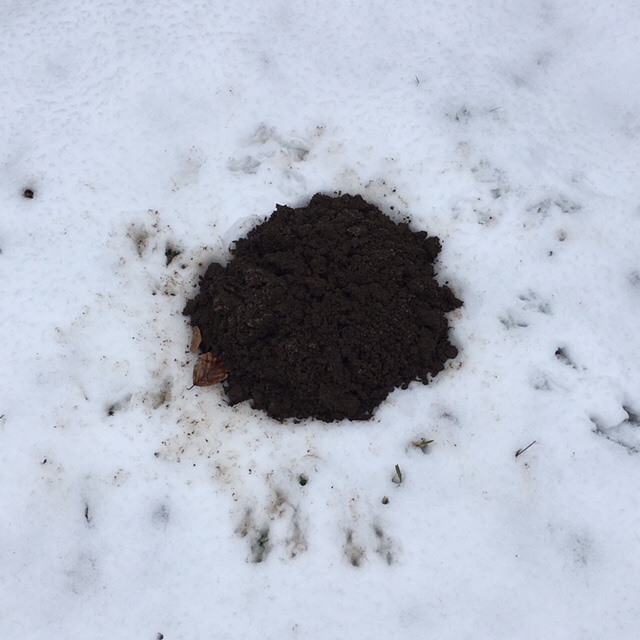 Ben and Charley spent Erika’s naptime playing Minecraft together. It’s the only time they get to play together. Ben’s been watching tutorials on youtube on how to use redstone to make things, so he was trying to get his new knowledge to work, and showing Charley at the same time. I love that Ben almost instantly passes on what he’s discovered.

Charley however is Bored of Minecraft and has had enough of my being unavailable due to figuring out how to live here. He wants me to come back now. He misses me. So tomorrow he’s going to help me bake, and I’m going to try to figure out how to facilitate painting sessions again.

And my two week trial of the sensor ended today. I genuinely miss it already. I downloaded the app to upload all my data so the nurse can look at it before she calls me tomorrow, I just need to actually upload my data now. What have I learned? My sugars are wilder than I thought – but no wilder than they are during pregnancy, it’s just I’m forced to test more during pregnancy. It’s changed my attitude towards testing because of that but my goodness fingerprick tests are even more of a pain (time wise) since wearing the sensor. By the time I’ve managed to get blood out and found my kit and set it up and waited for it to switch on and answered some question from a child and done the actual test and explained (again) to one of the children what I’m doing, I’ve either turned it off without paying attention to the result or totally forgotten what I was intending to eat having checked my sugars so have no idea what I was going to dose for. I hate diabetes. It’s so…. constant. The sensor has been great. I was just about getting used to it, not letting it control me, but using it as a tool. Checking my blood glucose levels wasn’t a chore, I didn’t feel like I was under pressure to check, and I was aware of my eating/dosing/checking habits changing over the fortnight as I moved away from “I’m being observed” to “this method is obviously not working, how do I fix this sugary situation?” I’ve tweaked a fair bit of stuff over the fortnight as a result. It’s nice to not feel observed right now though. 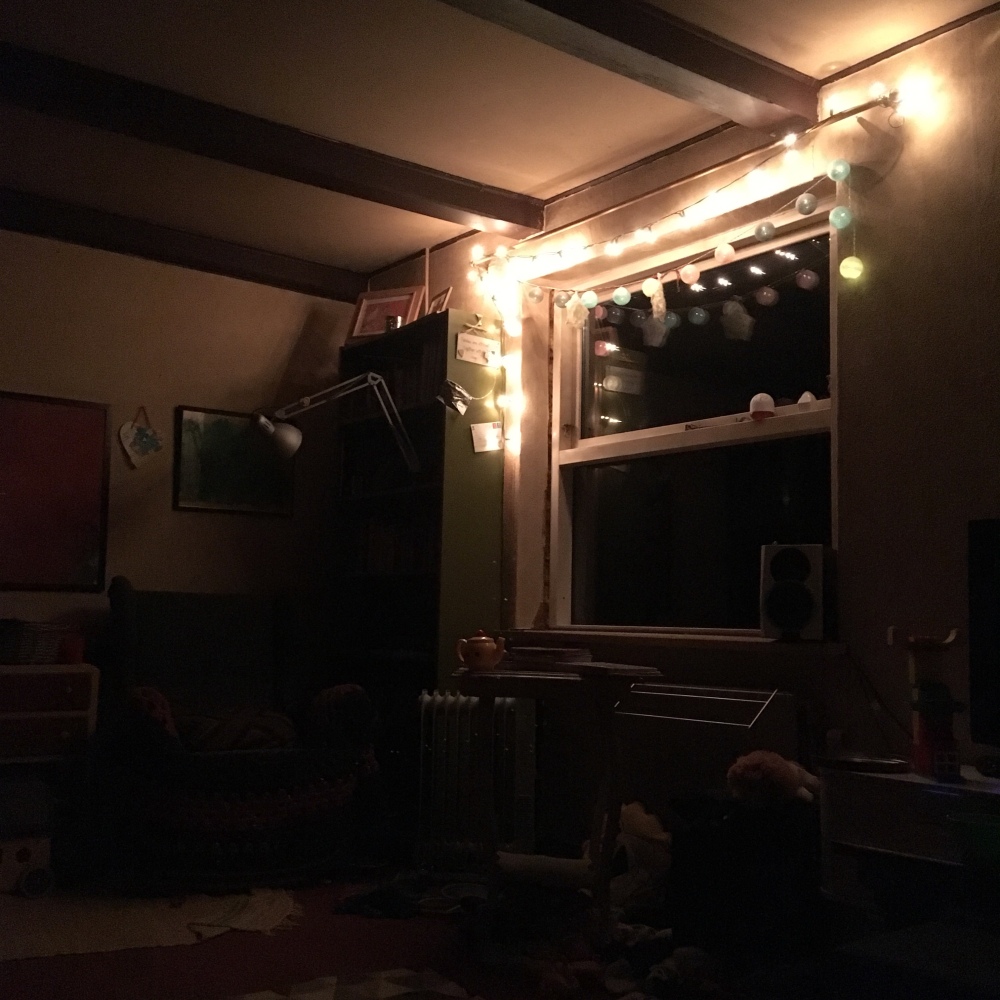 Took this while waiting for Erika to give in and go to sleep – hoping that the timer lights switching off might do a better job tonight of convincing her than they did last night. Don’t think they had much to do with it but it’s thankfully a much earlier bedtime for me at last tonight and no hypo to deal with either – but putting a new i-Port on will have to wait til tomorrow. 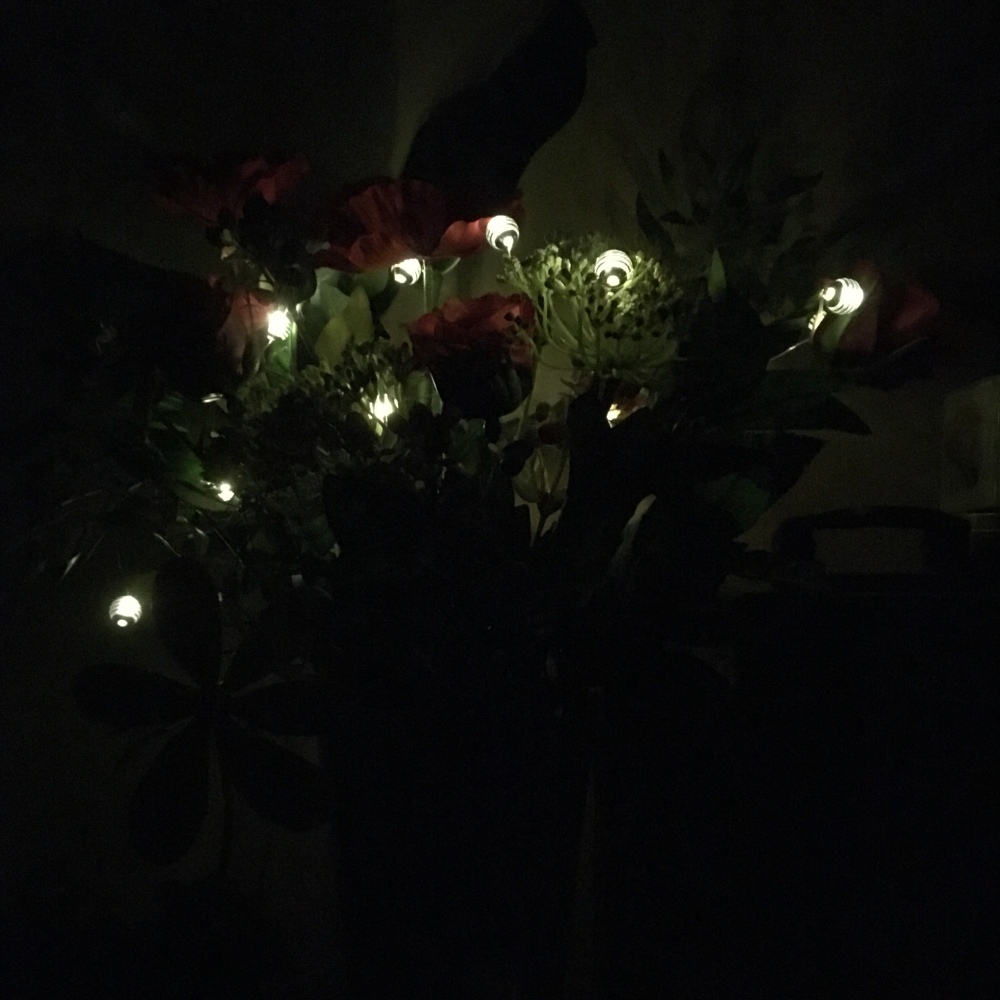